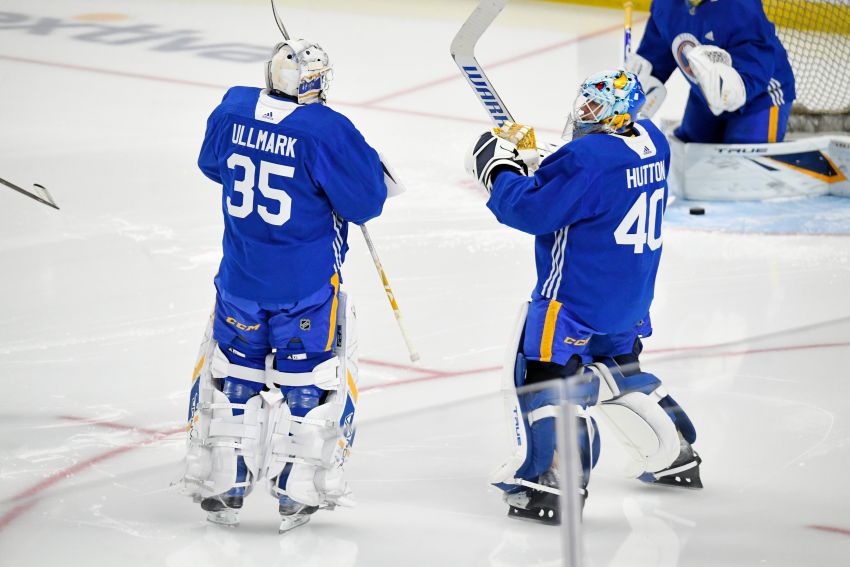 After snatching the starting job from Carter Hutton last season, Linus Ullmark figured to have the inside track to be the Buffalo Sabres’ No. 1 goalie this year.

Ullmark, 27, morphed into a workhorse a year ago, playing 26 out of 32 games at one point as Hutton struggled.

But not surprisingly, coach Ralph Krueger said he wants to foster internal competition and “keep the picture small.” Right now, the Sabres don’t have a No. 1 goalie.

“We’re going to take it a game at a time,” Krueger said on a Zoom call Sunday. “If somebody gets hot here, they could get a few. We would like to avoid back-to-backs. I’m not going to say never. Generally, we would be sharing the back-to-backs. If you look at after our first two back-to-backs, we play 10 games in 19 days always having a day in between.

“If somebody gets hot in a stretch like that, why not ride them?”

Hutton, having participated in all of training camp, could be the favorite to start Thursday’s season opener against the Washington Capitals. The teams play again Friday at KeyBank Center, so the goalies could split the first two games.

“It’s a bit of a whirlwind, right?” Hutton said Jan. 4 of the layoff the Sabres experienced because of the COVID-19 pandemic. “You go (10) months off to right into the full-tilt playing hockey. You got games coming fast and hard.

“I think for me, like the preparation I put in to have the confidence in my fitness and all that stuff (is important), so when it came to the hockey, the rest could take care of itself.”

Hutton, 35, endured a bizarre 2019-20 season. After winning his first six starts, he did not earn another victory until Feb. 1.

Over a stunning 102-day stretch, he compiled a ghastly 0-8-4 record while posting a 4.04 goals-against average and an .872 save percentage.

Following the season, Hutton revealed to The Buffalo News he had spent part of the year working to correct a vision problem.

When asked about the problem he experienced last year, Hutton offered no details and only a curt answer, saying he corrected it during the season.

“I just had an issue, some stuff I dealt with,” he said last week.

Over a three-week stretch in February while Ullmark was injured, Hutton found another groove, compiling a 6-2-0 record.

“I thought I was playing good hockey at the end of the year,” he said.

In Saturday’s scrimmage, rookie Sabres winger Jack Quinn, 19, grabbed a pass from the left corner in the right circle and instead of shooting, quickly fed linemate Casey Mittelstadt for an easy goal.

The deft pass illustrated Quinn’s soft hands, terrific playmaking abilities and supreme vision. But in camp, Quinn, the eighth overall pick in October, has also showcased other aspects of his game.

“What excites the coaching room is the little things he does – there’s little picks, little (boxes), little spins, unbelievable confidence with the puck,” Krueger said. “You can see why with Team Canada (at the World Junior Championship) he was often playing in the final minutes of games when they were ahead.”

Porter, 34, played two seasons with Wilkes-Barre/Scranton before returning to Rochester, where he played five total seasons, including the last three.