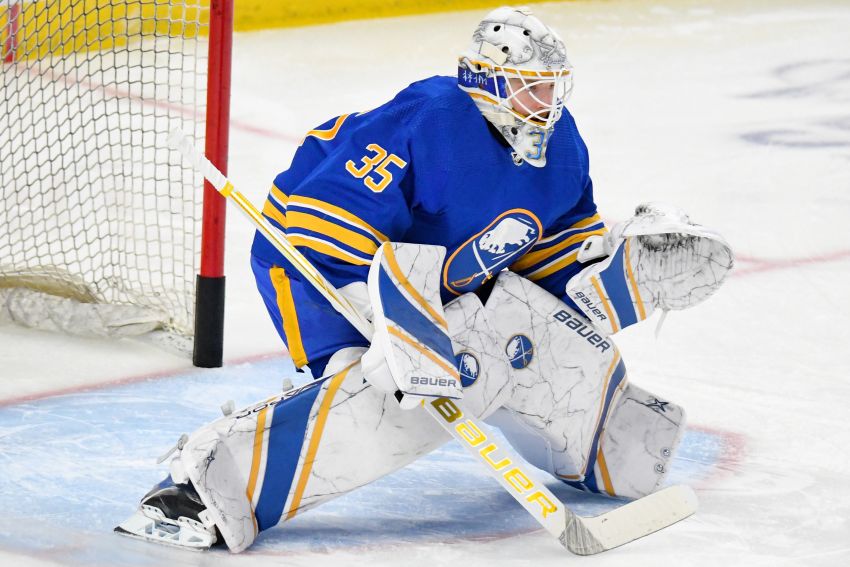 Ullmark, who has started 12 of the Sabres’ 17 games, left Thursday’s 4-3 overtime loss to the New Jersey Devils after the first period.

“It’s a hard hit, it’s a heavy hit,” Sabres coach Ralph Krueger said on a Zoom call this morning. “The best case we’ll get him back in a month. So a huge loss at this point in our season, especially coming off the tail end of that New Jersey game, which was clearly his strongest performance of the season.”

Carter Hutton will start this afternoon against the Philadelphia Flyers at KeyBank Center. The Sabres recalled Jonas Johansson from the taxi squad this afternoon to back him up.

Could the Sabres start looking for another goalie?

Johansson, a strong prospect, has played one period in the last 50 weeks. Taxi-squad goalie Dustin Tokarski, a decorated AHL goalie, has played two games with the Rochester Americans this season. He hasn’t played an NHL contest since 2016-17.

“The solutions off of Linus’ injury, right now it’s get through this weekend, it’s step back and analyze, and then move forward with a strategy,” Krueger said. “Right now, we’re looking forward to a good weekend with Carter Hutton. He had some strong games against Philadelphia back-to-back earlier in the season when we needed them, and that’s our full focus and we’ll come back to you with the strategic side of things after the weekend.”

In other lineup news, Krueger said winger Jeff Skinner will play this afternoon, ending his three-game benching. Defenseman Rasmus Ristolainen, who has missed seven games after battling COVID-19, and winger Tobias Rieder will also return against the Flyers.

2 thoughts on “Sabres goalie Linus Ullmark out at least one month; Jeff Skinner set to return”