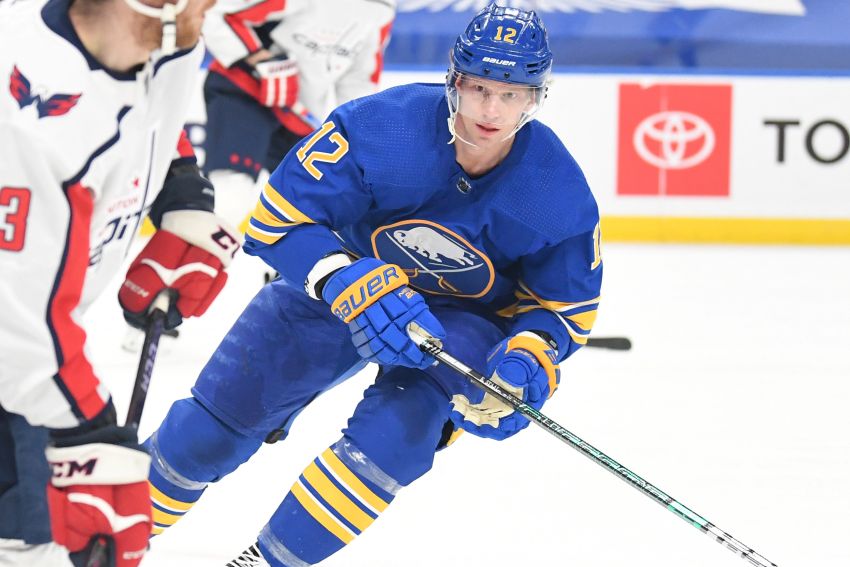 Eric Staal was hardly interested in revisiting his rough 32-game tenure in Buffalo and explaining the hapless Sabres’ struggles.

Staal, 36, left the NHL’s laughingstock on Friday in the midst of a stunning 17-game winless skid and a personal 23-game goal drought.

So can you blame the veteran center, one of the league’s most decorated players, for wanting to forget about a tumultuous two months and concentrate on his new opportunity with the Montreal Canadiens?

“The good part for me, right now, is I don’t really need to explain,” Staal, who was traded for the second time in seven months, said on a Zoom call Sunday. “I can kind of put that behind me and focus on what I can do for the Montreal Canadiens, which is what I’m going to try to do.

“Obviously, it has been a very difficult season for the Sabres and for me personally there. I think there’s a lot of contributing factors. I mean, I’m not going to lay them all out.”

“There were so many hurdles, so many things that just didn’t line up the way we had in mind or had envisioned,” he said. “The reality is we started OK. We had an up-and-down kind of first two weeks or so. We were kind of finding our game, filling our roles and then we got hit by COVID. It went through our room like wildfire and it wasn’t great.”

Seven Sabres and former coach Ralph Krueger, who was fired March 17, tested positive for COVID-19. The virus hit defenseman Rasmus Ristolainen so hard he struggled to walk up the stairs in his home.

“Two weeks of guys battling that and a couple guys battling it pretty hard, it was difficult,” Staal said. “And we kind of after that, when we came back, never found any footing, and then injuries started to mount and in that division, when you’re playing teams that don’t beat themselves, it’s difficult.

“And we just didn’t have enough in the locker room to be able to counteract that and manage that properly. It got tougher and tougher, obviously.”

When interim Sabres coach Don Granato self-isolated in his hotel room and missed Thursday’s 4-0 road loss to the Pittsburgh Penguins, he watched a drained Staal give an intermission interview.

“He looked exhausted and depleted,” said Granato, who briefly entered the NHL’s COVID-19 protocol. “I can tell you behind the scenes, he’s the exact opposite. He was amazing, keeping guys up on the bench through this adversity and challenge, in the locker room saying the right things. For me as a coach, certainly as a new coach, I could not have asked for a more supportive veteran-experience player around.”

Despite Staal’s poor season – he has compiled three goals, 10 points and an awful minus-20 rating – he fetched the Sabres third- and fifth-round picks in 2021. He had the Canadiens on his 10-team no-trade list, but because the Canadian government shortened the quarantine period from 14 to seven days, he approved the trade.

Staal, who was teammates with Sabres general manager Kevyn Adams early in his career, said his friend will “do the best he can to recharge that organization.”

“But there’s a ways to go,” he said. “For me, having this chance to be a Montreal Canadien and join this team with a lot of great players, a lot of great talent is exciting for me.”

The Sabres host the Philadelphia Flyers on Monday at KeyBank Center, the start of a four-game home stand.

With Staal in Montreal and captain Jack Eichel sidelined indefinitely by an upper-body injury, the Sabres have a dearth of center talent.

Jean-Sebastien Dea, who hadn’t played an NHL game since Feb. 4, 2020, started Saturday afternoon’s 3-2 loss to the Boston Bruins as the No. 1 center between Taylor Hall and Sam Reinhart.

Later in the first period, Granato promoted Casey Mittelstadt, a third- or fourth-line winger nearly all season, to pivot the top line.

Why did Mittelstadt earn the promotion?

“You’re reading body language on the bench and feeling vibes, and he had one real good shift,” Granato said following the game.

The changing lineup has forced Granato to cobble together lines based on his reactions from the bench.

“So you’re looking in a game like (Saturday’s) to see, ‘OK, who may have a little bit more tonight and what might be the chemistry?’” Granato said.

The Sabres on Sunday sent goalie Ukko-Pekka Luukkonen and forward Brett Murray from the taxi squad back to the Rochester Americans.

Buffalo’s March 20 home game with Boston that was postponed because of the Bruins’ COVID-19 problems has been rescheduled for April 20 at 7 p.m.

2 thoughts on “Eric Staal doesn’t want to revisit past with Sabres: ‘Put that behind me’”