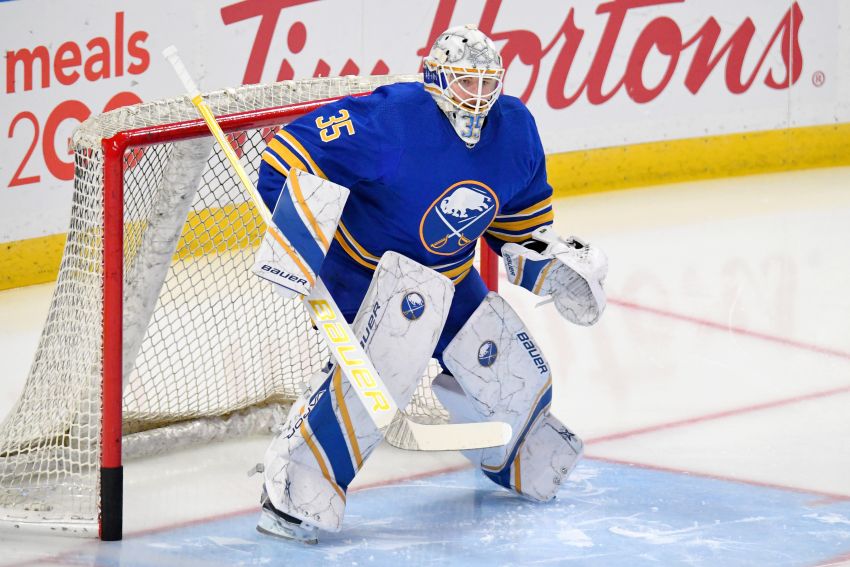 Then Ullmark, 27, quickly settled in, showcasing his regular strong form while making 33 saves against the Boston Bruins.

“After a couple shots you’re in it, like you never left,” Ullmark said on a Zoom call after the Sabres’ 17th consecutive loss.

The Sabres wish Ullmark, who suffered a lower-body injury Feb. 25, never left the lineup. They imploded without their No. 1 goalie.

Their myriad problems, of course, extend far beyond goaltending. But it’s safe to say if Ullmark had remained healthy, they would’ve won at least a few times over the past month.

“He showed what he can do,” Sabres winger Kyle Okposo said of Ullmark’s performance Saturday. “I mean, he made a ton of good saves, he was very calm back there and he played great. He’s the type of goalie that can give you a chance to win every night.”

Ullmark will likely carry the load over the final six weeks this season, playing as many games as he can handle.

As Ullmark watched the Sabres fall apart from the sidelines, he said he did not want to rush back into the lineup. He started practicing again Tuesday.

“I have full faith in the medical team and in me, myself and everyone that’s been helping me out during this process, and I knew we’d take all the necessary steps and we’d check off all the boxes that need to be checked off,” he said. “I would come back when I was ready. (Friday) after that practice it felt like I was ready to play.”

Still, the Sabres, who have looked downright awful defensively over their marathon skid, have started to clean things up a bit.

“I think you guys that watched could kind of sense two games ago it was out of control, (then) a little better control and then (today) again the shots were more of the same, from the same areas, so there’s more consistency. Much easier for a goaltender.”