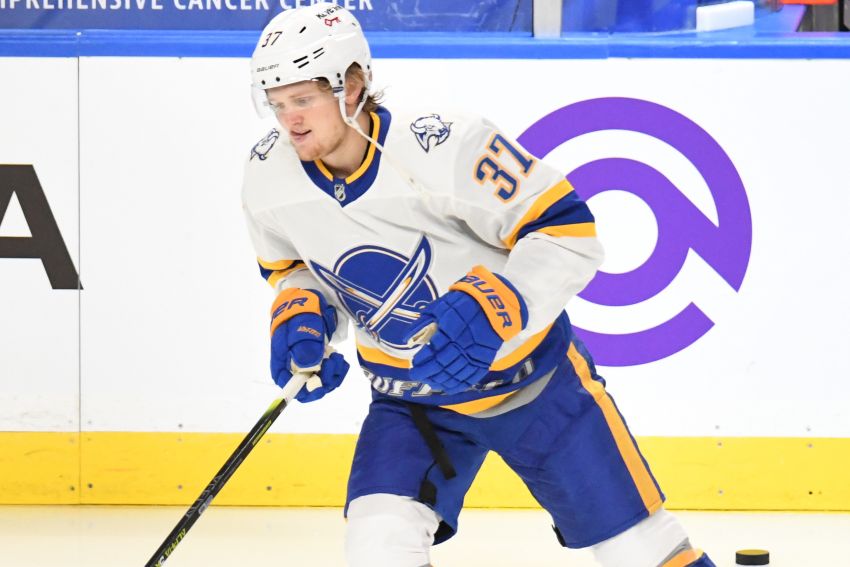 BUFFALO – Coach Ralph Krueger noticed it right away this season. Over the year winger Casey Mittelstadt spent away from the Sabres, he had matured.

Mittelstadt’s 36-game stint in the minors last year and the COVID-19 layoff offered him a chance to revamp his body and mind. He arrived at training camp determined to earn back the spot he had lost.

“His attitude from the get-go was different this year,” Krueger said on a Zoom call Thursday. “There was a fight and a bite, a fitness level, his foot speed has increased.”

Mittelstadt, 22, has slowly worked his way back, starting the season on the taxi squad. He then parlayed some impressive spot duty into semi-regular action. He has played three straight games and eight of the last 11 entering tonight’s contest against the Pittsburgh Penguins at KeyBank Center.

“Last year, I kind of saw how quickly it can be taken away,” Mittelstadt said last month. “I kind of took it for granted a little bit.”

So Mittelstadt, the eighth overall pick in 2017, has evolved. These days, he showcases a more dogged, fast-paced style. Krueger even occasionally utilizes him as a penalty killer.

The 6-foot-1, 196-pound Mittelstadt, who has been switched from center to wing, has learned that embracing defense can help unleash his offensive talents.

“He’s also showing up in these puck-pressure videos that we have here (as an) example of what we need to do right, there’s Casey, here’s Casey again,” Krueger said. “He’s really hungry on playing that game away from the puck and understanding the value of it as an offensive player that the better we pressure the puck, the more we take away the space from the opposition and the quicker we get it back and the genius of players like Casey can then grow out of that.”

Sabres center Eric Staal, a 17-year veteran, said Mittelstadt has displayed “a little bit more of a competitive edge every time he’s been out there.”

“There’s been pockets of his skill and talent that have come through, but I think it’s that detail part of the game and those little wall battles or puck battles he seems to be growing stronger in day by day,” he said. “For him to develop into an everydayer and NHL player, it’s those details you need to continue to work on and get stronger at, especially through practice and when your opportunity comes be ready.”

Waiting for that opportunity was an unusual experience. Other than being scratched a few times before the Sabres demoted him to the Rochester Americans in December 2019, Mittelstadt had always played regularly.

“It was tough,” Mittelstadt said Friday of getting scratched. “I think just try to stay ready. Like, some days you’re going to have to do extra work when you don’t want to. Yeah, I think that’s pretty much all it is, just doing the extra stuff, making sure you’re getting ready, doing an extra workout or just working on your body, especially on the ice.”

Changing positions, a move Krueger recently said could be permanent, has been much easier. Other than skating on the wing for his summer team and in a World Junior Championship camp, he said he had always played center.

“I’ve liked the wing just because you’re on the outside a little bit more, you get to carry the puck in a little more on rushes,” Mittelstadt said. “Obviously, when you’re in the middle of the ice, you’re kicking out and driving a lot.”

Mittelstadt played left wing earlier this season before recently being shifted to the right side beside center Curtis Lazar and Jeff Skinner.

“It’s nice to play with Lazar, we kind of have two centers on the line, two guys who can take draws and do things like that,” said Mittelstadt, who filled in for injured center Dylan Cozens on the first line late in Thursday’s 5-2 loss to Pittsburgh, the Sabres’ ninth straight defeat.

Mittelstadt won all eight of his draws Thursday. He struggled in the faceoff circle as a rookie two years ago, winning just 39.7%.

He has worked – sometimes too much – to hone his faceoffs skills. He has improved to 54.8% this season.

“For me, more than anything, is just making sure to do a little bit of it each day,” said Mittelstadt, who has compiled one goal and four points in 10 games this season. “I think sometimes in the past I’ve done so much of it and overthought it that I was trying so many different moves. Like, for me, my strengths are my quickness and just reacting and watching the ref drop the puck, so I think sometimes I’ve overthought it and worried too much what the other guy’s going to do versus just going in there and winning the battle.”