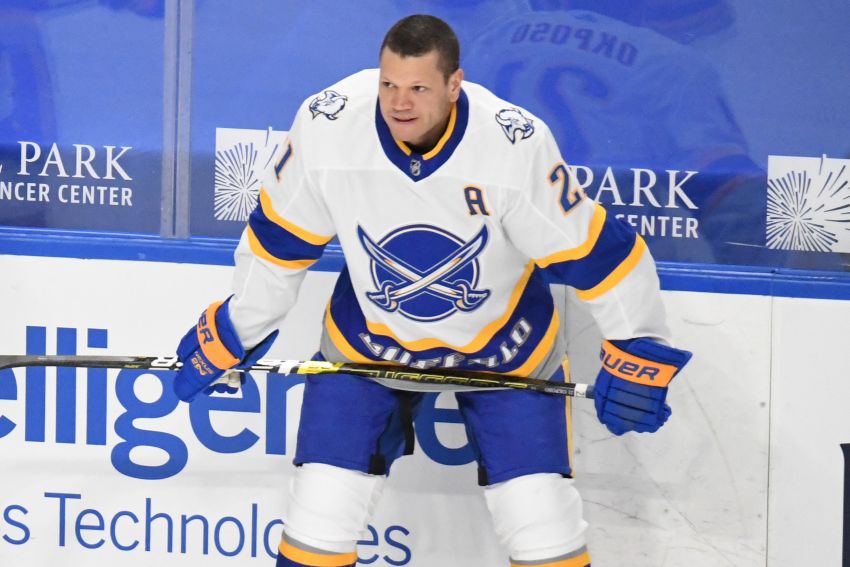 The Buffalo Sabres performed much better in their 17th consecutive loss than they had in the previous 16.

They took an early lead Saturday afternoon – winger Sam Reinhart scored their first power-play goal in 16 games just 2:01 into the game – and later snatched it back after the Boston Bruins tied it.

Having been shut out seven times this season, simply scoring a goal or two can be measured as progress. That’s the Sabres’ current sorry state.

For the just the third time in their streak, the Sabres led after two periods. Of course, they wilted late, allowing two third-period goals and losing 3-2 inside TD Garden.

They generated just three shots on goal in the third period, including zero during a stretch of more than 15 minutes.

“We were not as aggressive as we needed to be collectively,” interim coach Don Granato said on a Zoom call after the Sabres’ four-game road trip ended. “We just weren’t moving as a group of five well enough. We did that, we got into a rhythm to start the game and in the third … we were not moving as a unit. They elevated their intensity, we didn’t elevate as we should have.”

At this point, the Sabres have nothing to lose. So why play so tentatively with the game on the line? They’ve done it before, having registered zero shots in the third period of their 3-1 loss to the New York Islanders on Feb. 15.

After defenseman Colin Miller pumped a shot on Bruins goalie Dan Vladar 3:55 into the third period, winger Victor Olofsson recorded the Sabres’ next one at 19:49.

“Right now, it’s a little bit of a confidence thing,” said winger Kyle Okposo, who scored the Sabres’ second goal. “We’ve obviously been struggling to score all year and we know that it’s a time that we have to score and I just think we’re gripping it a little bit too tight when we shouldn’t. Pressure should be off right now.

“Obviously, we have the weight of this, of what’s going on, but we shouldn’t be squeezing our sticks right now. We should just be playing free, playing the right way, trying to make things happen.”

Still, the Sabres need to latch on to any positive developments. For 40 minutes at least, they played tighter defense, limiting the Bruins’ opportunities in front of goalie Linus Ullmark, who returned from a lower-body injury after 15-game absence.

“It was a lot better without the puck and I thought we did a good job of kind of eliminating their time and space,” Okposo said. “We did a lot of good things tonight, we just weren’t able to get the W.”

Despite losing 4-0 to the Pittsburgh Penguins on Thursday, Granato said he saw some progress in the Sabres, who carried that into Saturday.

“We felt that (today),” he said. “I think the players felt that. Certainly, it was nice to have Linus back in there and (the game) really came down to the third period. They were hungry. There’s a lot of things we can look at in the film and once again make the next step. That’s what you take from it.”