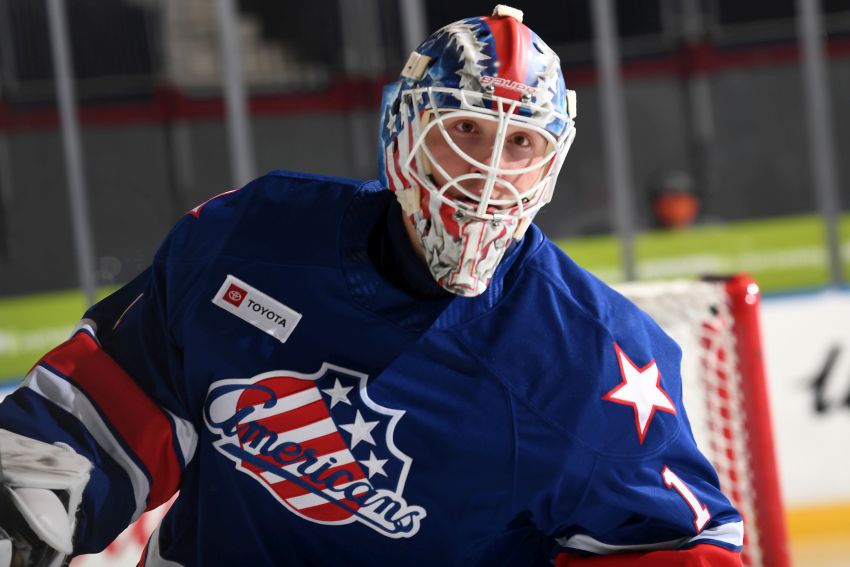 If injured Buffalo Sabres goalie Linus Ullmark keeps progressing, he could play this week, perhaps as soon as tonight. So Ukko-Pekka Luukkonen’s first taste of the NHL might be brief.

Still, spending just a day or two with the Sabres, even on the taxi squad as their third goalie, should be a significant step for Luukkonen’s development.

“The more time a prospect can get around (the NHL), the easier it becomes for them to associate, ‘Yes, I belong here,’” interim Sabres coach Don Granato said on a Zoom call prior to Wednesday’ 5-2 road loss to the Pittsburgh Penguins. “It moves from a dream to a reality for every player in that regard. So it’s a big moment.”

The Sabres recalled Luukkonen, their top goalie prospect, on Tuesday after Carter Hutton suffered a lower-body injury in Monday’s 5-3 loss to the New York Rangers.

Luukkonen said he was watching the game and learned later that night the Sabres would summon him from the Rochester Americans to the taxi squad. He skated Tuesday morning in Rochester before leaving for Pittsburgh.

“It’s been an exciting couple of days for me,” said Luukkonen, a second-round pick in 2017, 54th overall.

He added: “There’s going to be a lot to learn from here.”

Sabres goalie Dustin Tokarski start Wednesday’s game and was backed up by Michael Houser, who has spent most of this season as Rochester’s backup.

Luukkonen has started eight of the Amerks’ 10 games this season, compiling a 5-2-1 record with a 3.19 goals-against average and a .904 save percentage.

Luukkonen needs consistent work to keep developing, so the Amerks want him to play the bulk of their 32-game schedule.

He played most of 2019-20, his rookie season, with the Cincinnati Cyclones, earning ECHL All-Star honors. He also played 10 games with the Amerks.

He spent the early part of this season on loan to HC TPS, a Liiga team in Finland, posting a 6-3-4 mark with a 2.52 goals-against average and a .908 save percentage in 13 games, according to eliteprospects.com.

“I took some great steps there,” Luukkonen said. “We had good coaching there, too, so I was really fortunate to play (with TPS) at the start of the season. I think being back again in Finland in a professional environment, you learn from the older guys to become more professional and to be a better goalie and better player all around.”

Luukkonen has learned to settle down and utilize his 6-foot-5, 196-pound frame. He said he plays more confidently and showcases a “more relaxed” style.

“The game is all around more solid,” he said. “I feel like the positioning and being in the right place and not overreacting or overplaying situations, I think that is the base for being more – I don’t know – reactive in the goal and being more comfortable with the shots.

“I think coming from Europe where the ice is bigger, too, kind of getting into the smaller ice here I feel like having the better positioning and more stable game has helped me a lot.”

He added: “There’s not much scrambling anymore.”

Granato did not have an update on Hutton. Ullmark, who suffered a lower-body injury Feb. 23, started practicing Tuesday.

The Amerks are scheduled to play the Syracuse Crunch on Friday in Rochester.

Syracuse is one of only three opponents the Amerks face this season. They also have Utica and the Cleveland Monsters on their schedule.

“You’re playing … the same three teams all over again,” Luukkonen said. “That’s probably been the hardest part I can pick out from this season, so preparing yourself every game even though you may be facing the same opponent (a) second or third time in a row. That’s been one of the most different things compared to a normal season.”

Notes: Winger Tage Thompson was a late scratch against the Penguins because of illness, so the Sabres dressed an extra defenseman, Matt Irwin. With only 11 forwards, they used different right wingers beside center Eric Staal and Victor Olofsson. … The Sabres scratched wingers Kyle Okposo and Tobias Rieder (upper-body injuries). … Tokarski hadn’t started an NHL game since Dec. 21, 2015. … The Sabres recalled Houser from the taxi squad prior to the game.