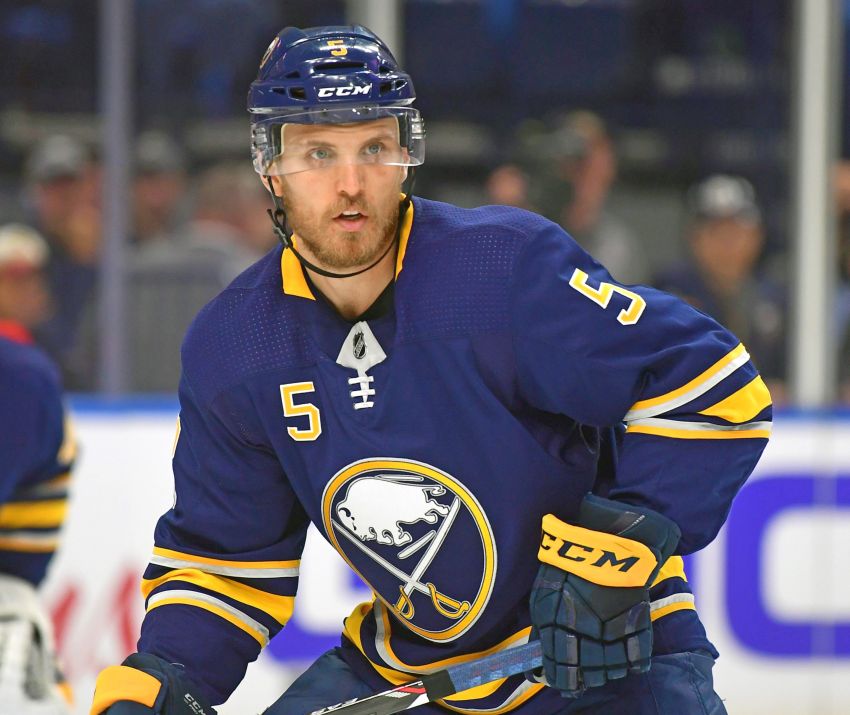 BUFFALO – As a depth defenseman for four seasons, Sabres newcomer Matt Tennyson often played sparingly during his frequent recalls to the NHL.

In a career-high 45 games with the Carolina Hurricanes a year ago, Tennyson, 27, hit the 18-minute mark once.

But these days, Tennyson is one of coach Phil Housley’s most trusted defensemen. In Saturday afternoon’s 3-2 loss to the San Jose Sharks, Tennyson played just over 21 minutes, his highest total since Feb. 15, 2015, a 93-game stretch.

A wild string of injuries have pushed Tennyson into a role larger than most expected. Right now, four Sabres defensemen – Nathan Beaulieu, Zach Bogosian, Justin Falk and Josh Gorges – are sidelined. Bogosian and Falk haven’t played yet this season.

So Housley has kept leaning heavily on Tennyson, using him to kill penalties and play a point on the power play. Those duties have helped Tennyson skate more than 18 minutes in eight of the last nine games.

“I’ve been on the other side of it, you play about seven or 12 minutes as a sixth D, it’s tough to stay in the game mentally, physically,” Tennyson said Sunday inside KeyBank Center. “It’s a lot easier to just kind of go with the flow of the game. It’s a lot more fun.”

The injuries have forced Housley to juggle combinations and rely on his top defense duo, Rasmus Ristolainen and Marco Scandella, a lot. Both skated more than 25 minutes last game.

Due to the rugged nature of the position, defensemen are always at a premium. The Sabres have already used nine defensemen through the first 12 games.

For some perspective, they used nine defensemen all of 2015-16, and the last one they recalled, Chad Ruhwedel, played one game in March. They used 12 last season.

“It’s just the way it goes sometimes,” Housley said of the injuries. “There’s injuries, sometimes you’re getting different looks, some guys need to take a step back, some guys are playing well. … Through all of this, we’re trying to look at a lot of different combinations.”

Tennyson, who has zero points in 12 games, has settled on the second pair beside Jake McCabe. Tennyson appreciates the confidence Housley has shown in him.

“It’s all based on how we play, right?” said Tennyson, who signed a two-year contract July 1. “As long as I’m playing well, hopefully he’s seeing that as well and he can be confident putting me out there in the situations that he does.”

Housley kept putting Tennyson out Saturday after his gaffe at the blue line – he missed the puck after his stick got caught on the boards – led to Joonas Donskoi’s breakaway goal out of the penalty box.

“With the injuries, we’ve had to rely on the other players, and Matt’s done a terrific job,” Housley said. “Would he have liked to take that puck back that banked off the wall (Saturday)? Yes. But I can’t really fault him the way he’s been playing. I thought McCabe and Tennyson had some really good games together.”

Of course, the defensemen must start contributing offensively. The Sabres are the league’s only team without a goal from a defender. The blue line has combined for just 12 assists.

Housley has stressed all season the Sabres must possess a shot mentality.

“The forwards know that if the puck goes a little bit high, we’re going to try to get it toward the net, so they know to go to the net,” said Tennyson, who has three goals and 20 points in 120 career NHL appearances. “Yeah, there’s no goals as a D corps. There’s nothing you can really do about that. Keep playing the same way, you should shoot the puck and hopefully you get some opportunities to score some goals.”

Update: The Sabres sent Redmond to the Rochester Americans today.

Redmond, who joined the Sabres earlier this month, played two games with the big club. He started the season in the AHL.