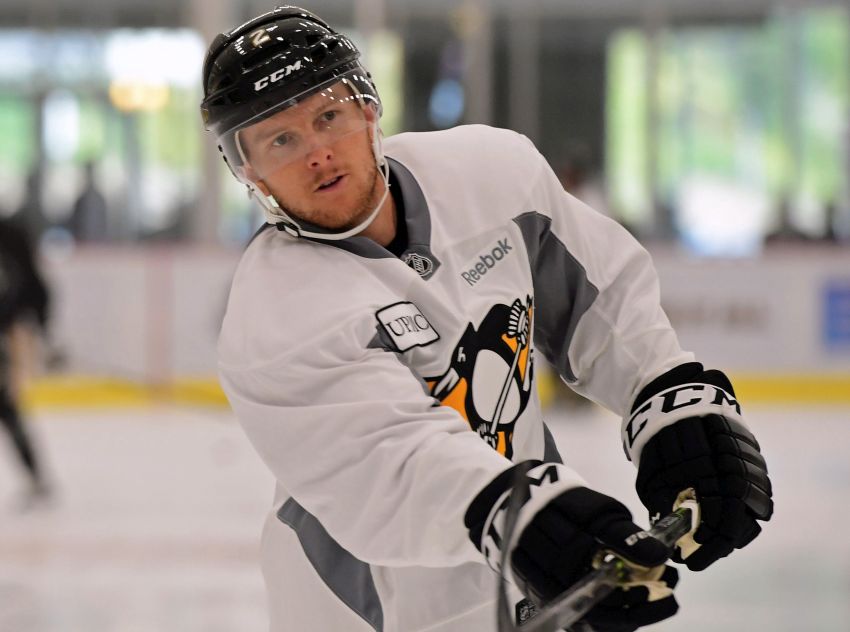 BUFFALO – By last season, when Chad Ruhwedel earned just a one-game recall, it was obvious the Sabres would move on from the talented AHL defenseman.

Of course, a lack of injuries – Buffalo’s blue line stayed remarkably healthy in 2015-16 – limited his action. But even the year before, as a 10-goal, 36-point campaign helped Ruhwedel receive Rochester Americans MVP honors, he managed only four NHL appearances.

“It was kind of a rough season for the Sabres and the Americans both,” Ruhwedel said of last year prior to the Pittsburgh Penguins tilt tonight against inside KeyBank Center. “So … I guess that’s the only way you could put it, it was a little rough.”

So Ruhwedel, 26, quickly found a suitor in free agency, the Penguins. He signed a one-year, two-way contract with the Stanley Cup champions July 1.

“I would say it wasn’t too difficult of a decision to choose them,” Ruhwedel said.

Ruhwedel, who barely got a sniff from the Sabres, has become an NHL regular. After starting the season with Pittsburgh’s AHL affiliate in Wilkes-Barre/Scranton, injuries created an opportunity.

Ruhwedel has played 26 NHL games this season, including the last 15, compiling two goals and seven points. He had two assists in 33 contests with the Sabres over four seasons.

Why does Ruhwedel fit in so well in Pittsburgh?

“They tend to play fast, right?” he said. “They get the puck up to the forward as fast as (they) can and go play on the offense. That’s how I try to play my game. It’s been a good fit here so far.”

“His mobility fits into the style of play we’re trying to play in Pittsburgh,” he said. “But I give Chad a lot of credit. He’s a competitive guy. He’s worked on every aspect of his game. But I think he’s fit into our defense corps just because of his overall two-way play.”

Ruhwedel has no hard feelings toward the Sabres, whose battered defense corps could use his speed right now. The team’s old regime, not current general manager Tim Murray, signed him as a college free agent in 2013 following an All-American season at UMass Lowell.

“They gave me my first shot in the NHL,” Ruhwedel said. “(I) had three years here and a lot of great memories here, so I’m very grateful.”