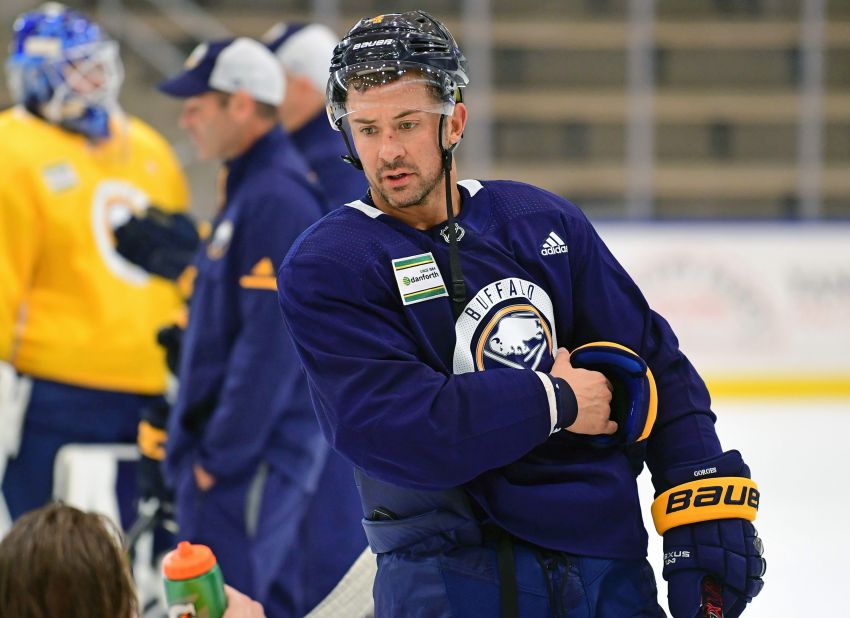 Gorges, 33, is a stay-at-home, defensive defenseman. He plays full throttle, rarely letting up.

His talents, of course, would be welcomed by any team. But the NHL has evolved in recent seasons, transforming into a speedy league.

These days, most defenders must also slickly move the puck and drive possession. That isn’t Gorges’ forte.

The Sabres revamped their defense corps during the offseason, adding speed for new coach Phil Housley, who wants to utilize an aggressive five-man attack.

So Housley sat Gorges for the opening three games, the first healthy scratches of his four-year Buffalo career. But the 0-2-1 Sabres, who begin a four-game road trip tonight, need a spark, so Gorges will likely play against the San Jose Sharks.

“We need to make some changes,” Housley said Wednesday inside KeyBank Center. “We had to make changes because we haven’t won … so we’re just giving our defense a little different look.”

Gorges practiced beside Jake McCabe on Wednesday at HarborCenter before the Sabres flew to California, making rookie Victor Antipin the odd man out.

So how does Gorges fit in on this new blue line?

“Still trying to find that way right now,” he told the Times Herald.

While Gorges acknowledged he must change to meet the new demands, he also said he must “be who I am, how I play, do what I do.”

“But at the same time, there’s a philosophy and a system and an idea of how a team wants to play that you have to be a part of,” he said. “So if that means that you got to do extra to get yourself involved in the play and carry the puck and jump down and be involved, you got to be willing to make those adjustments and work … so that you’re fitting into what the team wants. Because if you’re not fitting into the team structure, you’re never going to do it.”

Gorges, a favorite of former Sabres coach Dan Bylsma, is a proud veteran. He often speaks passionately about his team, so he wasn’t about to pout over sitting out.

“He’s been really good, really good teammate, approaching the game the right way,” Housley said. “I know it’s not easy, being a veteran guy. He should be ready for his opportunity right now. It’s good of him that he’s had a great attitude.”

Naturally, getting scratched was difficult for Gorges, who has played 749 NHL games after going undrafted.

“You want to be helping your team and be in the battle, in the game,” he said. “But at the same time, it’s a difficult situation, because you don’t want to be the guy that’s in the room and feeling sorry for himself and be a distraction. Guys got a job to do. …

“You do the best you can to come to the rink with a positive attitude, do what you can, do what you do and let the chips fall where they may after that.”

Housley’s message to the team’s oldest defenseman him has been simple.

“Keep working,” said Gorges, an alternate captain for three years before losing his letter this season. “That’s kind of the gist of things. Don’t know when you’re going to get in, but keep being prepared, keep showing us that you’re hungry. When the time comes, then you can be ready.”

To some observers, it was surprising Housley didn’t start the season dressing Gorges out of respect. Defensemen are always at a premium and the Sabres are a young team, so it seemed like Gorges wouldn’t sit too long.

“You don’t really know,” Gorges said of playing. “You hope each day you come you’re back in. But that’s for higher powers than me to decide. To sit and say, ‘I think I’m going to be in this one and then you’re not,’ it’s tough. You don’t want to ride that roller coaster of emotions. You just come each day.

“When your name gets called, be ready and do what you have to do on those off days to make sure when you do get a chance that you’re ready to go.”