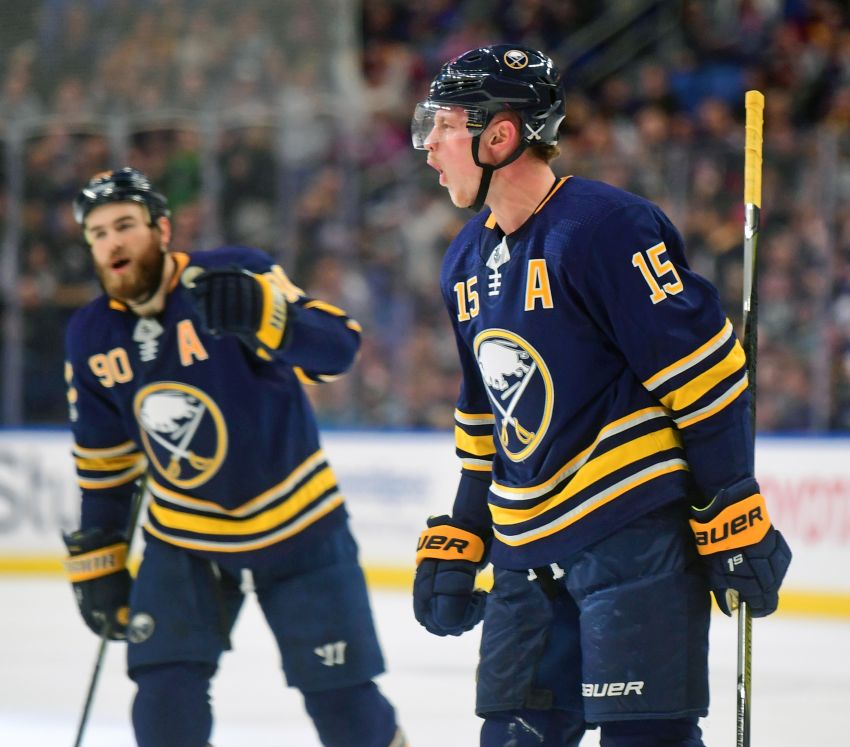 BUFFALO – The frustration of another tight loss and his missed opportunities overwhelmed Jack Eichel on Saturday afternoon, and as the Sabres center walked to the dressing room on his 21st birthday, he snapped his stick over his leg.

Early in the 3-2 loss, Eichel celebrated emphatically after his power-play goal appeared to tie the game. But the San Jose Sharks challenged, and after a long delay, officials ruled center Sam Reinhart interfered with goalie Aaron Dell.

Then with the game tied almost halfway through the third period, linemate Jason Pominville fed an open Eichel in front for what looked like an easy goal before the 18,892 fans inside KeyBank Center.

The puck, however, rode up Eichel’s stick, nullifying his opportunity. The third-year star immediately looked up in frustration.

“They get some good bounces and the puck bounces the opposite way for us,” Eichel said. “But it’s frustrating. No points out of the game, and we thought we played pretty well. It was a good effort against a good hockey team.”

Against a team closing its five-game road trip, the Sabres blew a second-period lead and a chance to earn only their second home win this season.

Right now, at 3-7-2, the Sabres have assumed their regular spot among the Eastern Conference bottom-feeders. After a regime change and a roster overhaul, a lot was expected under new coach Phil Housley.

Standings-wise, not much has changed from recent seasons. But Housley believes more efforts like Saturday’s will eventually pay off.

“You look at our effort, you look at how we played the game tonight, and it comes down to a mistake, obviously,” Housley said. “I have to give our guys a lot of credit, because they did everything but win tonight. …

“I can’t erase the effort that our guys brought today. It’s unfortunate that we lost. If we continue to work that way, we’re going to get out results. I’m not going to say anything negative about our group. I’m happy about our effort. I’m not happy about a loss.”

Pominville said: “We did a lot of good things. That’s the frustrating part. … We competed, we got some looks. When you’re on a roll and you’re winning a lot of games, a game like today is probably a game that you find a way to win.”

Of course, while the Sabres, who have four one-goal losses, might be playing better than their record indicates, they still “have a long, long way to go,” Housley said.

He added: “We’re still learning as a group … to win, and I believe they’ve taken steps in the right direction with the compete and what it takes to win in this league.”

Incredibly, the Sharks won for only the third time in 20 tries in Buffalo since they entered the league in 1991.

For a while Saturday, it looked like the Sabres would continue their dominance. After San Jose’s Joonas Dickson opened the scoring, center Ryan O’Reilly’s goal, the Sabres’ first in 14 tries on the power play, tied it 2:55 into the second period.

Then Pominville connected on Eichel’s nifty feed at 14:51. The lead, however, lasted less than five minutes.