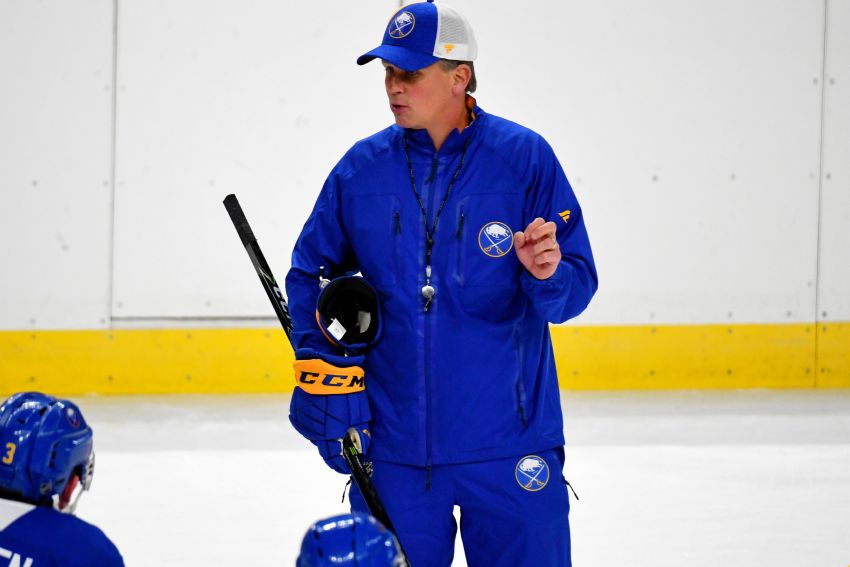 A night earlier, as Miami was annihilating his school in a CCHA playoff game in Oxford, Ohio, Appert had approached his coach, Bob Daniels, during the second intermission.

Appert, a junior backup goalie, suggested to Daniels that Jeff Blashill, who had been pulled early from the blowout, should replace him. If Blashill re-entered the game, Appert reasoned, he could prepare himself for the next night’s rematch.

“We were getting our (butt) kicked in the playoffs, so it’s probably not a great time for a player to talk to the coach,” said Appert, who will coach his first game for the Rochester Americans tonight against the Utica Comets in Blue Cross Arena. “But I did, and it wasn’t easy. Coach was pretty hot with me.”

A fuming Daniels snapped at Appert. So when Daniels called him to his room the next day, Appert was understandably nervous.

But Daniels, having slept on everything, told Appert how much his suggestion meant to him.

“It was just another selfless move on his part, about saying, ‘Hey, I’m looking at the big picture, and let’s let Jeff go into tomorrow’s game with a little more confidence,’” Daniels recalled.

Appert wasn’t the most talented goalie. In an era before position coaches, he relied on athleticism and competitiveness.

“He played the position really like a linebacker would play in football,” Daniel said.

He added: “You don’t need to meet them at the blue line. Like, he would really come out of his net.”

Appert played just 28 games over his NCAA career, compiling a 4.65 goals-against average and an .850 save percentage.

Still, he endeared himself to Daniels throughout his tenure at the university in Big Rapids, Michigan.

Daniels planned to redshirt Appert as a freshman. Then Ferris State lost its regular goalies to an injury and a suspension by early December.

Suddenly, Daniels needed Appert. So on the morning of a game, Daniels told him he wanted him to start that night. If he played, he would use a year of eligibility. Daniels, however, said he would be willing to end the goalie’s suspension.

“He said, ‘I think the team needs you to start,’ and I was like, ‘All right, I’m in, let’s go,’” Appert said. “And fortunately we won, we beat Western Michigan, and I knew that I wasn’t going to get a ton of other games that season.”

Over the years, Daniels learned Appert had developed a strong feel for the team and how it was playing. By his senior season, Daniels would use him as a sounding board on the bench.

After his eligibility expired, Daniels hired Appert, who had expressed interest in coaching, as a volunteer assistant. A career was born.

Appert, 46, believes the episode in Miami and his willingness to play in a pinch as a freshman illustrated to Daniels he possessed coaching qualities.

Twenty-five years after Daniels offered Appert an opportunity to coach, he’s leading the Buffalo Sabres’ American Hockey League affiliate. Appert, having spent his entire career in college and junior, had never spent a day in pro hockey until this season.

The Minnesota native has taken a different, non-traditional route to the AHL.

He joined Denver as an unpaid volunteer coach – he also took graduate classes and worked at a hockey equipment store – after a short stint with Ferris State. He parlayed his gig at Denver into a paid assistant’s job at Mercyhurst, only to return to Denver weeks later when a regular position opened with the Pioneers.

“His professional growth was just, I mean, almost weekly he would get better and better in not only working with our goaltenders, but our players, his analysis of video, his ability to be able to communicate with the young guys and with our staff,” former Denver coach George Gwozdecky said. “I mean, they loved him right away.”

Appert won two national championships under Gwozdecky at Denver, helping him land on the radar for NCAA head coaching positions.

“I knew from early on that Seth was destined to have opportunities at the coaching level and to move up,” Gwozdecky said.

Appert earned his first head coaching job at RPI in 2006 and led the Engineers to their first NCAA tournament appearance in 16 years in 2011. After RPI fired him in 2017, USA Hockey’s National Team Development Program quickly hired him to lead its Under-18 program.

He understands the skepticism that has met his hire. He replaced Chris Taylor, who enjoyed a successful three-year run as the Amerks reestablished themselves as AHL heavyweights.

Taylor spent a chunk of his 19-year playing career in the NHL. He was also an AHL star. After Sabres general manager Kevyn Adams fired Taylor, the New Jersey Devils hired him as an assistant coach.

“I haven’t done it, right?” Appert said of coaching pro hockey. “It’s that simple. I didn’t play pro and I didn’t coach pro. So there’s absolutely room for that thought for people that want to have that thought. That’s OK. It doesn’t bother me at all.”

Blashill, Appert’s close friend, experienced a similar path to pro hockey, coaching college and junior before jumping to the pros with the Detroit Red Wings.

After one year as an assistant in the NHL, the Red Wings put him in charge of their AHL affiliate, the Grand Rapids Griffins. He was promoted to the Red Wings’ head job in 2015.

“No matter what your background is, guys are quickly going to learn what you’re about as a person first, what you’re about as a coach second, and if they believe in you as a person that you’re a good person, that you care about them and they believe in you as a coach that you can help them become better players, especially in the American League and the trajectory of their career, they really don’t care where you’ve coached or where you played,” Blashill said.

Gwozdecky said Appert’s ability to relate to his players and teach them can help him thrive at the pro level.

“He … has this ability to be able to be a great presence of support and encouragement,” Gwozdecky said. “He knows how to press the right buttons, if you will. That’s a sign of a good manager, a good coach, a good leader is when you know how to relate to people and encourage them and motivate them and get them to believe that they can do things that maybe they don’t even believe they can do themselves.”

“That’s really important at this level,” Oglevie said. “He’s done a great job coming in and telling us what his expectations are for us, not only individually, but as a group.”

Former Sabres and Amerks defenseman Erik Burgdoerfer, who played four seasons under Appert at RPI, believes his former coach’s background will serve him well in his new role developing prospects for the NHL.

“Let’s face it, the game has become as young man’s game drastically since the last lockout (in 2013),” Burgdoerfer said. “So to have someone that’s been working very successfully with what is essentially your entry-level contract players coming in, which he’s done over the last four years, I think it’s a perfect fit.”

One thought on “Making of a coach: How Amerks’ Seth Appert went from college goalie to AHL”