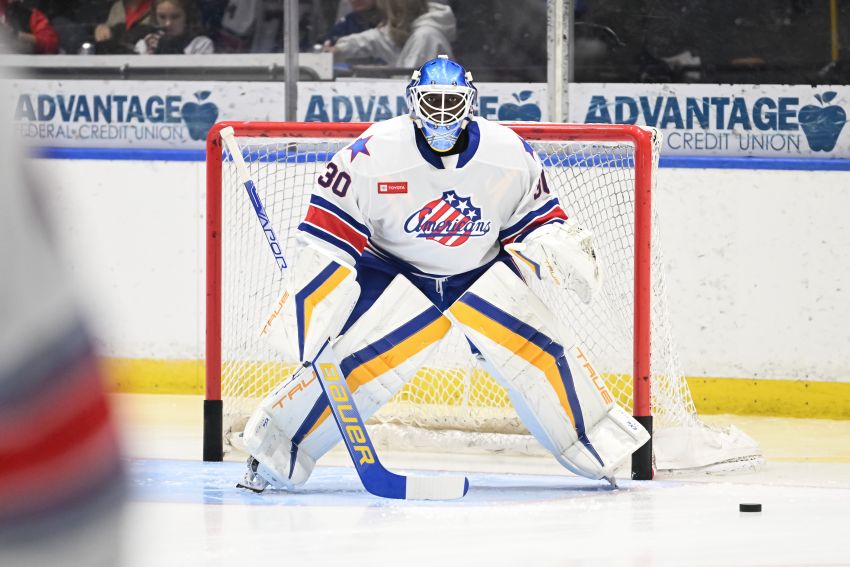 After suffering a season-ending wrist injury with the Sabres on Jan. 11, Subban enjoyed a productive summer and strong training camp. When Buffalo assigned him to Rochester, he expected to begin the season as Ukko-Pekka Luukkonen’s backup.

Instead, Subban, 28, has been watching games from a suite at Blue Cross Arena. He hasn’t played since a lower-body injury knocked him out of his first preseason start on Oct. 9.

Naturally, the affable veteran, who returned to practice on Tuesday, is anxious for game action.

“It’s a 10 out of 10, I’ll tell you that,” Subban said on a Zoom call Tuesday of his excitement. “I’ve been watching a lot of hockey, just ready to get back in there.”

Subban also began last year in the AHL, playing five games for the Rockford IceHogs before the Sabres acquired him on Dec. 2 from the Chicago Blackhawks. Prior to that stint in the minors, he had spent four straight seasons in the NHL.

But he has embraced coming to Rochester, Appert said, making an impact with his younger teammates.

“He’s a great human, he’s an unbelievable teammate,” Appert said. “His work ethic’s incredible, his attitude’s incredible. So when you have players on your team that carry themselves in that way, again, a guy that’s been in the NHL a lot and doesn’t act like he’s above being here, smile on his face, working so hard, you root for guys like that. You want them to have success.

“And then to see him have that injury knowing what he’s had to go through already over the last little bit the last couple seasons, you’re just disappointed for him as a human being.”

“In a long season, when it’s a grind at times and travel and coming home late from bus rides and all those things, and you show up in the morning and you see him and he’s bouncing and he’s smiling and he’s laughing, those things are extremely valuable on a team, especially when you combine with with his talent and his competitiveness,” he said.

Subban assimilated so well last season that despite playing just four games – he was also injured in his debut before returning in mid-December – the Sabres re-signed him to a one-year, two-way contract.

The 6-foot-2, 215-pound Subban said he enjoyed his best summer of training ever, a common statement among players. He said the work has helped him develop “a complete physical level of speed, flexibility, endurance.”

“I felt amazing coming in,” he said. “That’s why I was so disappointed to have that injury. But I feel great coming back and it’s been good so far.”

Just five games into the season, the Amerks’ blue line is already depleted.

On Tuesday, the Amerks re-signed defenseman Brandon Davidson, according to the AHL website. Davidson, 31, spent all of last season in Rochester and also played six games for the Sabres in 2020-21.

Appert said earlier Tuesday the Amerks would need to add a defenseman or two.

They also recalled Zach Berzolla from the Cincinnati Cyclones.

In other injury news, Appert said forward Matej Pekar, who underwent surgery last season, could play in the next two weeks. Pekar recently returned to practice.