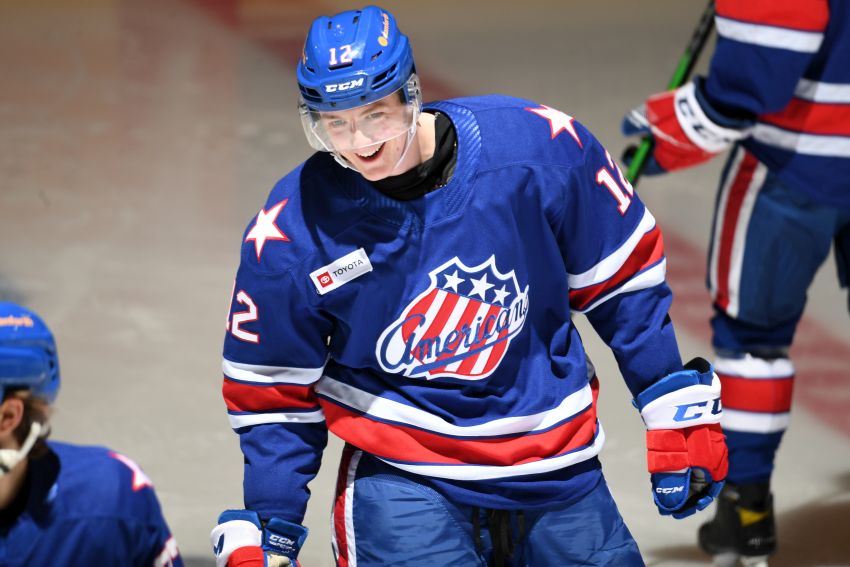 Buffalo drafted Matej Pekar in the fourth round in 2018. ©2021, Micheline Veluvolu, Rochester Americans

BUFFALO – Sabres prospect Matej Pekar wanted to agitate Brett Gallant, so as they awaited a faceoff at center ice, he bumped into the AHL’s premier tough guy.

Gallant, of course, retaliated, cross-checking Pekar near his neck. A second later, Pekar, a rookie forward with the Americans, dropped the gloves for the first time as a pro.

Meanwhile, Gallant, a veteran with the Cleveland Monsters, registered his 107th AHL fight, according to hockeyfights.com.

It did not matter Pekar, 21, lost the scrap April 14 in Rochester. Fighting the heavyweight generated some much-needed confidence for the Czech forward.

“It’s interesting, I don’t recommend that he should fight against the likes of Gallant very often, but man, what it can do for your confidence,” Amerks coach Seth Appert said on a Zoom call Monday. “Like, he went toe-to-toe with one of the toughest men in hockey, and he lived to tell the tale.”

Following the scrap, Appert immediately noticed a difference in Pekar, a fourth-round pick in 2018, 94th overall.

“It’s funny, the next practice was his best practice of the year by a mile, and then he was fabulous on Saturday night,” he said.

The 6-foot-1, 185-pound Pekar said he has “felt a little different” since that scrap.

“I think I needed that,” he said. “I mean, he sparked something … out of me. (I) definitely feel better after that. But I just got to keep that in me.”

Pekar’s ability to be a supreme pest makes him a unique prospect. He possesses a fierce edge.

“His greatest strength is his agitation,” Appert said. “He’s a rat, he’s a pest, opponents hate him – and I love those types of players.”

But the jump to pro hockey has been difficult for Pekar, who scored 12 goals and 34 points in 25 games last season for the junior Ontario Hockey League’s Sudbury Wolves.

His work ethic can no longer carry him.

“Every level he’s played at – in youth hockey, the USHL or the OHL – he’s been able to outwill, outcompete his lack of precision – systematic precision and puck execution precision,” Appert said. “You can’t do that in the American Hockey League or in the NHL. And players like him that make it, they walk that line, they have to be a pest, they have to be on the line of those things.

“But those players have to have the most detail with the puck and with their systematic execution, because otherwise they don’t get ice time.”

So Appert and his staff have challenged Pekar to practice with more purpose. The want every pass to be tape-to-tape and every puck he receives to be handled well.

“He could throw pucks away in the past,” Appert said. “Like, he’d just compete so hard he would get it back. Well, at this level, you’re not going to go get it back.”

Interim Sabres coach Don Granato said he was concerned how Borgen, 24, would adjust in his first game since Feb. 20. Granato, who replaced Ralph Krueger on March 17, has made notable changes to the team’s system.

“We’ve had some changes in how we defend and he hasn’t had a lot of practice time,” Granato said prior to Friday’s game. “He was good. There will still be an acclimation period for him based on just watching, but he has such a strong base of confidence and competitiveness and skill that it overrides most of any concern I would have at this point.”

Granato said Sabres goalie Carter Hutton, who has missed the last 17 games recovering from a lower-body injury, could return this season.