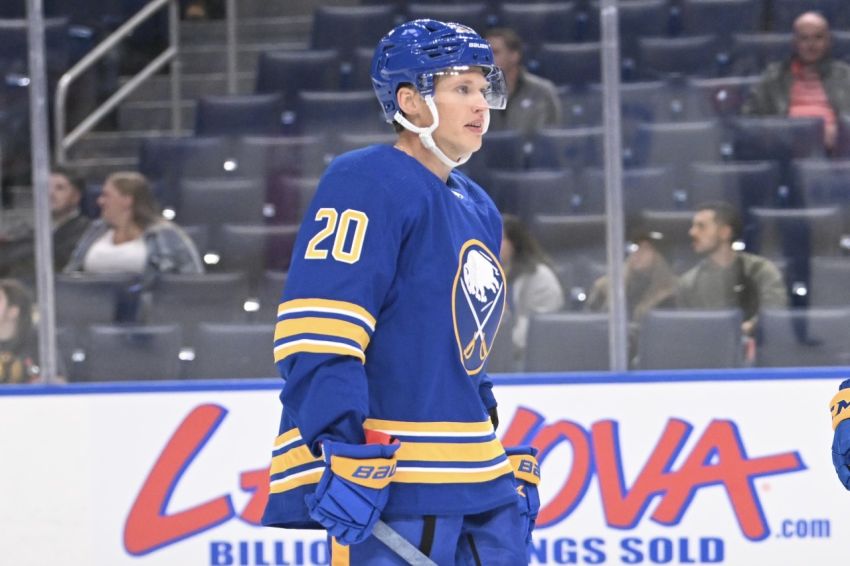 Lawrence Pilut is one of several defensemen Buffalo signed during the summer. ©2022, Micheline Veluvolu

BUFFALO – The Sabres have likely known for months which seven defensemen will comprise their opening night roster.

But what about the rest of the defense corps? Given the rugged nature of the position, defensemen are always at a premium. Last season, the Sabres used 11 defenders.

“We have great depth,” Pilut said following this morning’s skate at KeyBank Center. “I feel like everybody in here can contribute in their way and it’s awesome to see.”

Priskie said: “You can plug in any defenseman essentially from one to 11 and have a good lineup and have guys that have been there and know what to expect.”

Clague, Davies and Pilut are expected to play in tonight’s preseason finale on the road against the Pittsburgh Penguins.

The Sabres might assign all four defensemen to the AHL in the coming days. They must finalize their 23-man roster in advance of Thursday’s season opener by 5 p.m. Monday.

Waivers, of course, could impact some roster decisions. Clague, Davies and Priskie, all of whom have NHL experience, must clear before going to the Rochester Americans. Montreal claimed Clague from the Los Angeles Kings last season, and he played 25 games for the Canadiens.

“When you like players that need to go on waivers, there’s always a concern,” Sabres coach Don Granato said. “So we like the players we have. They wouldn’t still be in camp.”

By keeping the defensemen in training camp this long, Granato and his staff can familiarize themselves with them.

“I want to see them as much as I can,” Granato said. “I watched a little bit of video of them from last season over the summer, talked to them when we were offering them over the summer. … These are guys that I like and I want to get to know even more, knowing that some of them will have to go to Rochester.”

The Sabres also want them to adjust to a new coaching staff, identity and style.

“I don’t worry too much about decisions,” Granato said of the roster. “To me, this whole process is about getting them more integrated with what we’re doing in the event that they are playing games with us, which is highly likely (when) you look at an 82-game season.”

More on the recent defense additions:

“I like to use my legs,” he said. “That’s probably my biggest strength, my skating. But, yeah, I just like to move the puck, get it to the forwards’ hands and join the rush whenever I can.”

– The 6-foot, 191-pound Priskie, 26, made the Florida Panthers’ roster out of camp last season and played his first four NHL games. The Quinnipiac product shuttled between the NHL and minors for months before settling in with the Charlotte Checkers late in the season.

Priskie, the only right-handed shot among the newcomers, has stood out during the preseason, registering one goal and three points in three contests.

“I’m kind of a two-way defenseman that can move the puck and help out in any situation,” he said.

The Sabres this morning recalled center Sean Malone from the Amerks and will dress him tonight.

A lower-body injury forced the West Seneca native to miss the opening days of camp.

“We wanted to give him a game earlier,” Granato said. “Obviously, health dictated that it wasn’t the case. … He has really played well in Rochester and was a guy we wanted back, and tonight’s an opportunity to get him in there before the season starts, knowing that there’s a chance he’ll be with us at some point during the year.”

Granato said goalie Eric Comrie will be starting and be backed up by Ukko-Pekka Luukkonen.