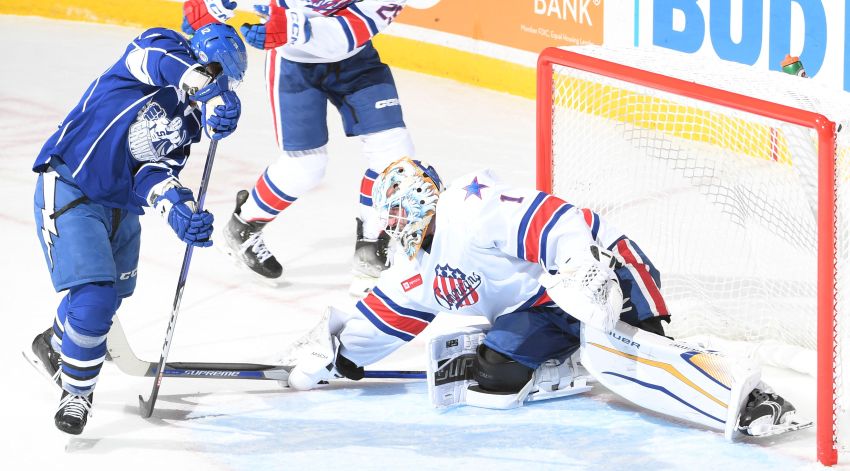 ROCHESTER – While the Buffalo Sabres list Ukko-Pekka Luukkonen as the same size as last year, his 6-foot-5, 217-pound frame is noticeably leaner. On the ice, the goalie is more agile and composed, showcasing a mature style as the Americans’ workhorse.

The genesis of Luukkonen’s transformation can be traced to his productive summer. In years past, injuries often hampered his offseason training. In 2021, for example, he suffered a season-ending left ankle sprain. In 2019, he underwent hip surgery.

This year, having recovered from a lower-body injury he suffered in April, the Finn could do whatever on-and off-ice work he wanted as he prepared for a pivotal season.

As a result, he has evolved into a different netminder.

“I have more speed and control over the moments,” Luukkonen told the Times Herald following Friday’s 4-3 win over the Syracuse Crunch at Blue Cross Arena. “I think you can see it in the games and see it on the ice, too, that there’s more control to it, (I’m) behind the puck all the time.”

“He’s visibly changed his body,” he said. “This is the first summer he’s been healthy. Every summer in pro hockey he’s had some … injuries that prevented him from training the way he likes to train. And this summer, his nutrition, his fitness, his strength, he was a machine this summer, and you can see it paying off.”

When the Sabres assigned Luukkonen to the Amerks again this season, they wanted the prospect labeled as their goalie of the future to handle a heavy workload.

Luukkonen has often played well during his stints with Buffalo over the past two seasons, compiling a .913 save percentage in 13 outings.

But injuries and the COVID-19 pandemic have wreaked havoc on his development and, entering his fourth pro campaign, he had played only 50 AHL games.

With goalies Craig Anderson and Eric Comrie entrenched in Buffalo this season, Luukkonen might have an opportunity to play more than 50 times with the Amerks if he stays healthy.

So far, he has played all five games for the Amerks and started on consecutive days twice. If veteran backup Malcolm Subban hadn’t been injured in the preseason, he likely would’ve received at least one day off.

“It’s not too crazy,” Luukkonen said of playing back-to-back contests. “I’m a young guy, I’d rather play all the minutes I can get.”

Luukkonen has already played an AHL-high 300 minutes. No other goalie has accumulated more than 184. His five appearances also lead the league.

Right now, his statistics don’t wow you. He has compiled a 3-2-0 record with a 3.00 goals-against average and an .892 save percentage. Before allowing five goals in Saturday’s 6-2 loss in Syracuse, he hadn’t given up more than three in a game.

Luukkonen has proven to be a difference-maker. Despite facing just 17 shots on Friday, he made some huge stops.

“He allowed us to get through those chaotic moments,” Appert said.

“The game comes fast and just like you have to reset yourself,” he said. “I think that’s the biggest thing. You can’t just expect you’re ready because you were ready the night before. So there’s a lot of preparation, finding that kind of attack mode for every night.”

As Luukkonen has grabbed the reigns on the No. 1 job, the loquacious Appert, a former college goalie, has tried to keep away from him.

“He’s in such a good spot right now I don’t really talk to him very much,” Appert said. “I was fortunate I was a goalie, he and I have a very good relationship, we’ve spent a lot of time together over the last couple years. He knows I trust him. And he is in such a good space physically, mentally right now, I’m not going to try to mess it up.”

Still, Luukkonen said he likes that Appert holds him accountable.

“So I think with the physical side and mental kind of starting to come together. He doesn’t have to be so involved every time. When the games are going well and there’s a good groove, that helps. The coaches kind of let me be or let the players who are doing well be.”