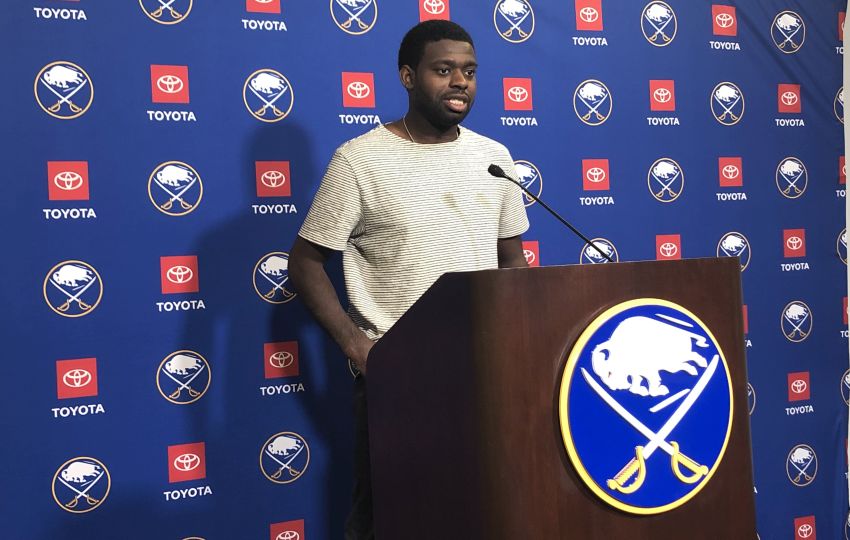 BUFFALO – The original plan called for a recording of Malcolm Subban singing the U.S. national anthem to be played before Friday’s season finale. But then the goalie’s Sabres teammates and some staff members encouraged him to do it live.

“It was awesome,” a smiling Subban said Saturday as the Sabres cleaned out their lockers and held end-of-season meetings. “I was, like, so nervous before. Like, I couldn’t even eat lunch. Oh yeah, I was so nervous.”

Subban, of course, isn’t a professional. He said he just likes to sing around his house to put himself in a good mood.

Until his short “audition” a few days ago, he said had never sang seriously in front of anyone.

But Subban, 28, went through with it, and when he finished his rendition of “The Star-Spangled Banner” standing at the Zamboni entrance inside KeyBank Center, the nearly 17,000 fans roared louder than they had for any anthem all season.

“Just hearing that, it made it all worth it, for sure,” Subban said.

Subban said the first conversations about singing the anthem started a couple of weeks of ago, mostly as a joke. Then he said it “kind of started to come to fruition a little bit.”

“It got so big to the point were I was like, ‘All right, I got to do this,’” he said. “But it wouldn’t have happened without the encouragement of everyone here. I never thought I’d ever be singing the anthem at a game. But it was unbelievable to do it in front of the fans.”

Subban, who underwent season-ending wrist surgery in January, said he sang a test anthem at 2:30 p.m. Friday before the Sabres’ 3-2 overtime win against the Chicago Blackhawks, his old team.

“It went well, so I decided to do it at the game,” he said. “Yeah, but even before that, I had a little voice note on my phone, and it was just like, ‘Oh say.’ You know, that? I played it and then when the Canadian anthem was going on I literally like, ‘Oh say, oh say, oh say,’ trying to keep, you know, like the right thing.”

As Subban sang, the Sabres smiled on the bench, eating up their friend’s performance.

“I was pretty impressed when he stepped up and did it live,” Sabres winger Casey Mittelstadt said. “I don’t have the balls to do that. That was extremely impressive. There was a recording going around. I tried not to listen to it to see what it would sound like live, and he’s good. I did not expect that.”

Subban said he “was just trying to keep the pitch” as he sang.

“I didn’t want to go too low or too high,” he said. “Just play that voice note and just stay at the right tone there. I mean, I’ve heard of people forgetting the words and stuff but I’ve honestly sang that anthem to myself at least probably like 300 times.”

Subban, as his teammates’ strong support illustrates, fit in quickly after the Sabres acquired him Dec. 2 in exchange for future considerations.

Following a stint with Chicago’s AHL affiliate early in the season, the Sabres’ goaltending woes offered Subban a fresh opportunity. But injuries quickly squashed it.

Subban went down late in his debut Dec. 4. He performed dynamically in his return Dec. 17, making 45 saves in a 3-2 overtime loss to the Pittsburgh Penguins.

Then Patrick Maroon fell on Subban in the second period of a 6-1 loss to the Tampa Bay Lightning on Jan. 11, injuring his wrist. Subban was in noticeable pain but gutted out the rest of the game because the Sabres had lost goalie Ukko-Pekka Luukkonen to injury earlier in the night.

“When it happened, I knew something was up,” Subban said. “Obviously, pretty painful. I … just remember skating in the corner trying to pick up my stick, seeing if I could get it. And then Upy getting hurt in the first, obviously, for me, I was just like, ‘All right, at least try to play with it, we’ll see how it goes.’”

If Subban had stayed healthy, he likely would’ve started regularly for at least the rest of the month.

“It’s tough,” Subban said. “You get traded, you want to have a good first impression and build some trust with everyone, teammates and staff and stuff. But obviously you go to try and focus on what you can control no matter how hard it gets. Just stay focused and now it’s just another mountain to climb. There’s always going to be mountains.”

Subban could’ve rehabbed at home in Toronto but chose to remain in Buffalo.

“Going home you sort of just get in your own head and stuff like that,” he said. “Coming to the rink, the guys were making it so much easier on me to take my mind off it and just enjoy myself and enjoy being around. I can’t thank them enough for that. It’s helped me a lot.”

Subban said he hopes to start skating around June.

The Sabres must address their goaltending this offseason. They have zero netminders under contract for next season (Luukkonen will be a restricted free agent).

Subban, who played only nine total games this season, said he’d “love” to re-sign with the Sabres. He might be a candidate to take over as the Rochester Americans’ starter and be the No. 3 goalie in the organization.

“Being close to home and just seeing the group here, knowing guys from before, it’s been an awesome ride so far,” he said.

The Belleville Senators’ 5-2 win over the Toronto Marlies on Saturday afternoon clinched the Amerks the AHL North Division’s fifth and final playoff spot.

The Amerks will face Belleville in the play-in round and host a game Wednesday at Blue Cross Arena.

The Sabres could send forward Peyton Krebs and defenseman Mattias Samuelsson to the Amerks.

Notes: Sabres defenseman Rasmus Dahlin said Saturday he has been asked to represent Team Sweden at the upcoming World Championship but hasn’t made a decision yet. … Sabres goalie Craig Anderson said a hip injury sidelined him late in the season. … The Sabres on Saturday sent goalie Michael Houser back to the Cincinnati Cyclones, their ECHL affiliate.