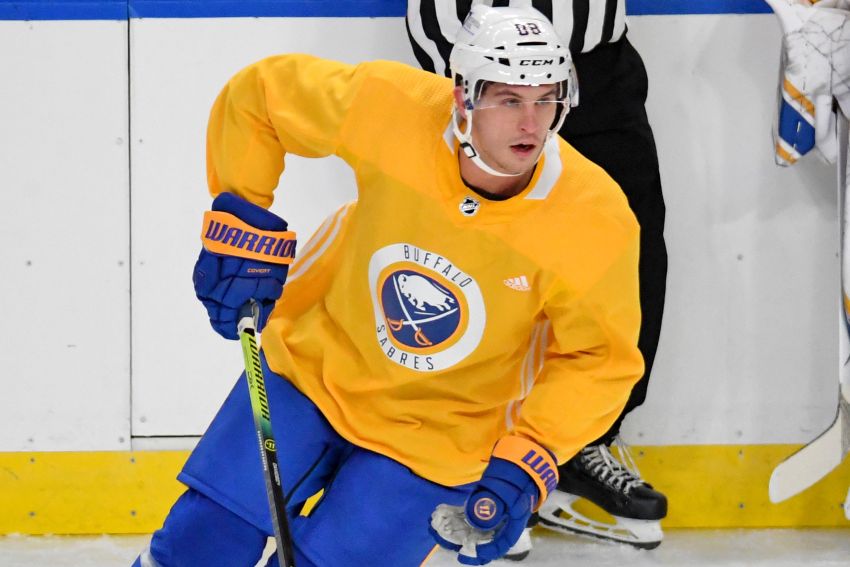 BUFFALO – Other than a four-and-a-half year stint in the Edmonton Oilers organization, Sabres defenseman Brandon Davidson has led a nomadic hockey life, enjoying little stability as he zigzagged across North America.

Davidson, 29, began his NHL career with the Oilers, playing 91 games over parts of three seasons. Since leaving Edmonton the first time in 2016-17, he ranks among hockey’s most well-traveled players, never spending more than a full year with one team or playing more than 33 contests for one club.

Davidson, who made his Sabres debut Monday, first moved when Edmonton traded him to Montreal. He lasted 23 games with the Canadiens before the Oilers claimed him on waivers early in 2017-18.

After playing another 23 games with the Oilers, they dished Davidson to the Islanders later that season. In a span of three months, he played for three teams.

Davidson played 10 games for the Chicago Blackhawks in 2018-19 and 12 total contests between the San Jose Sharks and Calgary Flames last season. He also had brief stints with the Rockford IceHogs and Stockton Heat, two AHL teams, over the past two seasons.

He made his first appearance for the Sabres on Monday, skating 11 minutes, 36 seconds in their 3-1 loss to the Islanders at KeyBank Center.

“It’s been a pleasure just kind of meeting everybody in this hockey world and adjusting,” Davidson said. “And that’s one thing that I’ve always kind of been proud of is that these challenges that do come my way with new teams and new cities, that I’ve been able to find my way, and here again in Buffalo I’m still trying to find my way.”

Davidson and his defense partner, Will Borgen, found their way into the lineup because defensemen Jake McCabe and Brandon Montour, both of whom tested positive for COVID-19 earlier this month, weren’t ready to play.

Incredibly, Davidson and Borgen, hadn’t played a game at any level since March 11.

“That was hard,” said Davidson, who has played 175 NHL games. “Coming into last night I think I had a lot of excitement, a lot of energy, definitely a few nerves, but I think that’s what I relish a little bit is kind of having that emotion for the game.

“I thought that last night I was kind of able to play my game. I thought I had a good start and it was something to build on.”

Davidson, however, must wait to play again. With McCabe back in the lineup Tuesday, the Sabres assigned Davidson back the taxi squad before the game.

Of course, Davidson, who signed a one-year, $700,000 contract, understands his role as a depth defender. He must utilize his 6-foot-2, 209-pound body to be physical and focus on making a strong first pass.

Still, Davidson, who led the rush in one shift early Monday, believes he can showcase a multi-faceted style.

“I have not one particular side to me,” he said. “I like to think I’m more dynamic than I am.”

Davidson envisions a greater role for himself someday.

“I just want to do this for as long as I can. If I can help out in any single way, whether that be first, second pairing or if that’s the seventh, eighth guy coming in, bringing energy. Either way, as long as I can keep playing and I can keep myself relevant, I’m going to do so.”

Prior to the Tuesday’s game, the Sabres also recalled winger Rasmus Asplund from the taxi squad and assigned winger Steven Fogarty, who made his season debut Monday, to the taxi squad.

Asplund, who played one game earlier this season, mostly skated at left wing on the fourth line beside center Riley Sheahan and Tage Thompson.