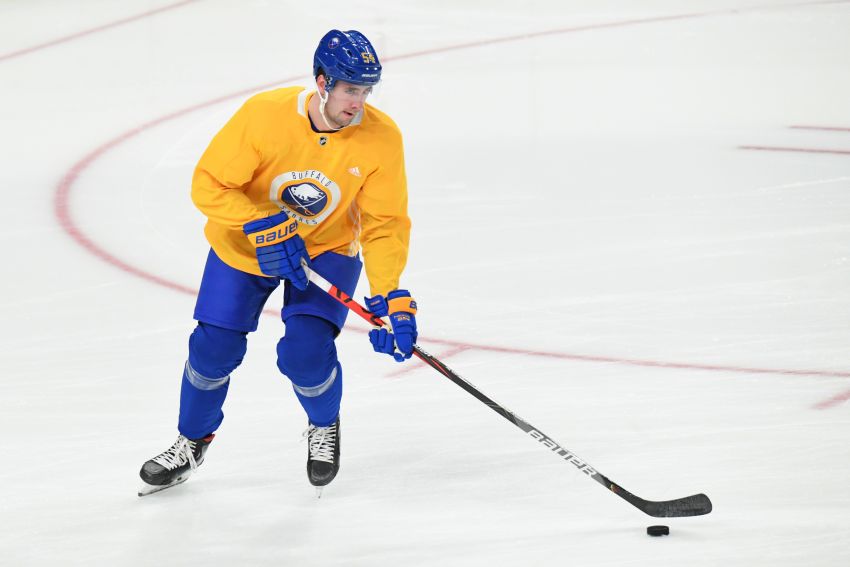 BUFFALO – A month ago, recalling defenseman Mattias Samuelsson and giving one of their top prospects a taste of the NHL wasn’t an option for the Sabres.

They were in the midst of their marathon 18-game winless skid, and the defense corps, like every aspect of the team, was struggling. They couldn’t expose a rookie to that environment.

But the defense has been thriving under interim coach Don Granato and interim assistant Dan Girardi, who runs the group. Rasmus Dahlin and Henri Jokiharju, for example, have started showcasing their old forms.

So with the blue line stabilized and the Sabres starting to win again, they recalled Samuelsson from the Rochester Americans prior to Sunday afternoon’s 4-2 win over the Pittsburgh Penguins inside KeyBank Center.

“Now was a real good time to bring in anybody young and new because those guys played so consistent and stable over the last little bit,” Granato said on a Zoom call. “And that was the case today. … Danny Girardi’s done an excellent job with them as well. It was a smooth entry for Mattias.”

The Sabres wanted Samuelsson, a second-round pick in 2018, 32nd overall, to play beside Ristolainen, who has helped buoy rookie defenseman Jacob Bryson’s development.

“It was automatic,” Granato said of putting Samuelsson with Ristolainen.

For more than a month, Ristolainen, 26, was paired beside Bryson.

“The chemistry with Bryson and Risto was awesome and … he enjoyed, I think, mentoring Bryse and bringing Bryse’s game along really quick,” Granato said. “We felt, ‘This is a perfect situation. We can bring Mattias up, slide him in there, and Bryson is ready to go on his own.’”

Samuelsson, who played two seasons at Western Michigan, said learned he had been recalled during the bus ride back to Rochester following Saturday’s 6-3 loss to the Cleveland Monsters.

Any NHL debut, of course, is special, but Samuelsson has ties to Pittsburgh and the Penguins. His father, former NHL defenseman Kjell Samuelsson, won the Stanley Cup with the Penguins in 1992. His mother, Vicki, is from Pittsburgh.

“Her whole side of the family still lives there,” Mattias Samuelsson said. “My dad won a Cup. So there’s definitely some history with the Penguins and, yeah, it’s pretty cool it’s in the first game.”

Samuelsson started his first game by taking a solo lap before the warm-up, a hockey tradition for a rookie playing his first game.

“It’s fun and you laugh about it and it’s something you’ll always remember,” he said.

Samuelsson blended in nicely during his debut, making no notable mistakes while recording one shot on goal and two hits.

The American said he was nervous before he started his pregame routine.

“Once you get in your pregame routine and start warming up and hit the ice for warm-ups, it kind of just feels like natural and you got to tell yourself it’s just another hockey game so you can be as competitive as possible,” he said.

The Sabres have said they want to give some of their top prospects a look in the NHL before the season ends. They recently recalled winger Arttu Ruotsalainen and goalie Ukko-Pekka Luukkonen.

Samuelsson has compiled three goals, 11 points and a minus-7 rating in 19 AHL games this season.

“He’s just better and better each time out,” Granato said. “Obviously, he hasn’t had many games. But the reports have been vastly encouraging. Just the progress has been significant.”

“I didn’t think it was appropriate to put him in here,” he said.

Granato said he expects Caggiula, 26, to play Tuesday against the Boston Bruins.

Granato said he wants Luukkonen, who was summoned to the taxi squad Saturday, to practice with the Sabres before playing a game.

Luukkonen, 22, has been recovering from a lower-body injury.

“I didn’t feel it was appropriate to throw him in here yet until he kind of gets a couple of days with us and skates with us,” Granato said.