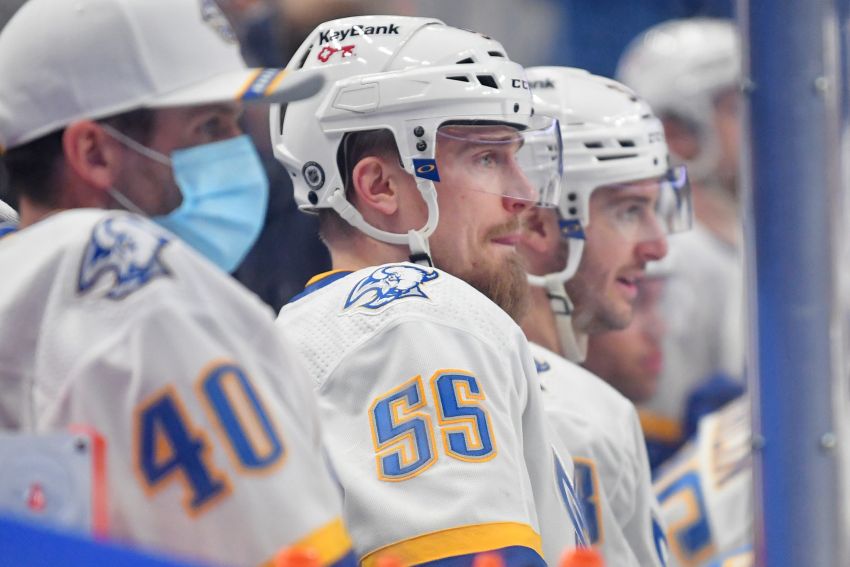 Rasmus Ristolainen has handled a heavy workload after recovering from COVID-19. ©2021, Micheline Veluvolu

BUFFALO – Rasmus Ristolainen’s harrowing battle with COVID-19 left him so weak he struggled to walk up the stairs in his home. The Sabres defenseman did not play for 27 days and missed seven games.

But since Ristolainen returned to the lineup Feb. 27, he has played all 10 contests, averaging 21 minutes, 28 seconds of ice time in the first nine entering Monday’s 6-0 loss to the Washington Capitals at KeyBank Center.

Have the Sabres considered resting Ristolainen, perhaps giving him a breather for one game of a back-to-back, so they don’t wear him out?

“You tell him that,” Sabres coach Ralph Krueger joked during a Zoom call Saturday. “No way, not with Risto. He’s such a competitor.”

He added: “There’s no way we could take him out of a game.”

Veteran Jake McCabe suffered a season-ending knee injury last month, so the hapless Sabres, who have lost 10 straight games, are already down one of their top defensemen. They desperately need the 6-foot-4, 221-pound Ristolainen, whose elite conditioning has helped him handle the heavy workload.

“He’s evolved over the last two years to an important leader,” Krueger said of Ristolainen. “He’s a voice in the locker room now. With Jake McCabe out of the lineup, (I) can’t imagine Risto not being there. …

“There’s no way Risto will ever miss a game unless the injury is really serious and even at a few percentage points off the mark, he’s still valuable to us.”

Ristolainen, like most of his teammates, has struggled at times over the past few weeks. The Finn compiled one goal, two points and a minus-13 rating since in his first nine games back.

“I don’t feel like I felt before the COVID, but it’s not an excuse,” Ristolainen said Monday morning. “I am not happy (with) the level I’ve been playing after and that’s how we all feel. There is so much better we can do as a team and individually.

“So, I mean, the only way for me to get better and feel better out there is to play. There is no practice or off-ice workout that can fix the level that needs to be or was.”

Overall, Ristolainen, 26, had averaged a team-high 22:34 of ice time this season entering Monday. Krueger will likely rest him by having him sit out of practice.

Sabres center Cody Eakin, who has scored just one goal in 26 games this season, an empty-netter, was a healthy scratch Monday.

Eakin’s penalty-killing prowess has helped the Sabres improve from 30th last season to fifth this year. His 57.5 faceoff percentage ranks first among Sabres who have taken at least 100 draws.

But Eakin, who scored a career-high 22 goals in 2017-18, hasn’t produced much offense. Overall, he has compiled four points and a minus-7 rating this season.

“Certainly, his role with us is clear, that maybe not as much of late, but I would say through the first 20 games, multiple games, where he would be matched up against top lines of the other team, would’ve neutralized possibly some of his offensive risk and or attacking ability,” Krueger said. “But he has been a good penalty killer for us. He has been a good faceoff man for us. He’s a character player for us. …

“We will be speaking to him more about that type of (scoring) input. Moving forward, we do need depth scoring and he can be a very valuable source of that. So we’re looking at the different ways that we can bring into the game.”

Asplund, 23, has scored one goal in four NHL outings this season. The Swede also registered two assists in three games with the Rochester Americans. He has spent most of the year skating with the taxi squad.

He has tried to use the extra time to hone small details in his game. He mentioned he has focused on becoming stronger along the walls and keeping the puck longer.

“Usually you don’t get the opportunity during the season to really work on stuff,” he said. “Even when I play some games, we have a lot of video to watch, really get into what the small details are that are going make a difference in my game.”

The AHL announced Monday it has postponed Wednesday’s Rochester Americans home game against the Syracuse Crunch “out of an abundance of caution in accordance to league COVID-19 protocols.”

The Amerks have multiple positive COVID-19 cases, according to The Buffalo News.

COVID-19 problems have forced the league to postpone three Amerks games in the last week. No makeup date was announced for Wednesday’s contest.