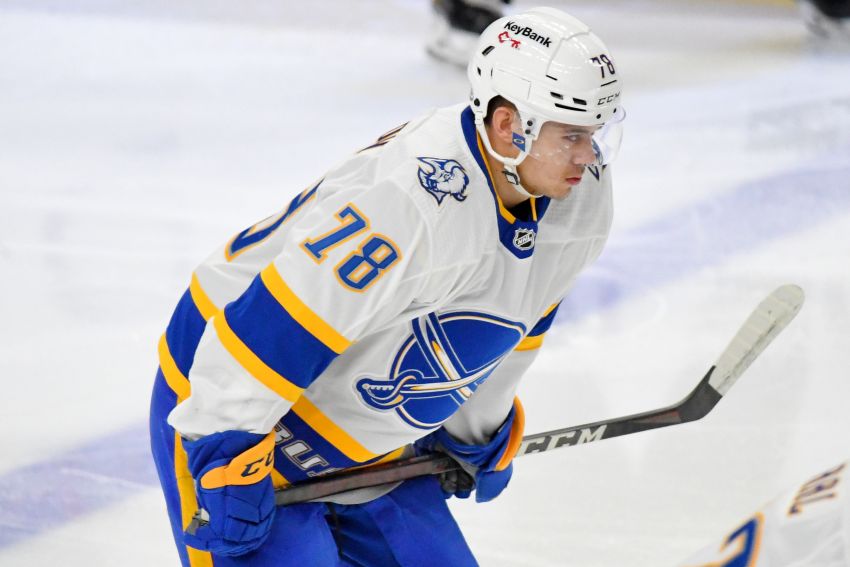 Jacob Bryson has quickly established himself as a trusted defenseman. ©2021, Micheline Veluvolu

BUFFALO – On the left side of the Sabres’ top defense tandem, there’s the diminutive Jacob Bryson, a speedy rookie who has quickly entrenched himself in the lineup.

In Wednesday’s 6-1 victory over the Philadelphia Flyers, Bryson and Ristolainen enjoyed their best night together, each recording two assists and a plus-4 rating as the Sabres ended their 18-game winless skid.

“That was a big game for both of us,” Bryson said on a Zoom call prior to Thursday’s 3-2 overtime loss to the New York Rangers at KeyBank Center. “We haven’t had one of those yet.”

Bryson, 23, has spent most of his 18-game tenure beside Ristolainen, including all seven contests he has played under interim Sabres coach Don Granato.

“I like the chemistry and the body language,” Granato said of the duo. “They clearly enjoy playing with each other, they’re very complimentary players. Risto is a leader, Bryse is a worker. And I think Risto, it appears to me, feels he has somebody there that he can push and he can demand and the guy’s going to thrive on it, embrace it.”

Granato said behind the scenes, Ristolainen, 26, is “every bit of what you see on the ice.”

“He’s a fierce, intense competitor with a very high personal standard, which pushes players around him,” he said.

Granato, who replaced Ralph Krueger on March 17, said Ristolainen’s drive can help get the best out of Bryson.

“(Bryson has) got a lot of confidence, he’s a got a lot of ability,” Granato said. “He’s another player that has some dynamic qualities. So there’s pieces in the game that he knows he can excel at. And he’s learning the other pieces of the game through a guy that’s one of the best, I would imagine, to learn from.”

Bryson said he has quickly learned to trust Ristolainen.

“He always makes those big hits and he’s one of those players that a lot of players hate to play against,” he said. “I like to have that as a D partner. It’s good for me. I think we play to each other’s strengths. I skate the puck out a lot and try to use him and he uses me a lot. But we work work well, we have good chemistry. (Wednesday) was a good example of that.”

Granato expects the Sabres to play faster – “Our team’s skating a lot more,” Bryson said – than Krueger. That should only help Bryson, a slick, puck-moving defender.

“He wants his guys always in motion, layers on the puck,” Bryson said of Granato. “So it makes it easier for all of us defensemen as far as gapping goes or breaking pucks out, guys are always in the right areas. When we’re gapping up, he wants us to circle up a lot. It makes it a lot easier for the forwards to come back. It’s been a lot easier for us, too.”

He added: “These last few games we’ve made a lot of improvements and our game’s looking better than ever.”

Entering Thursday’s game, Bryson had compiled one goal, four points and a minus-3 rating in the NHL.