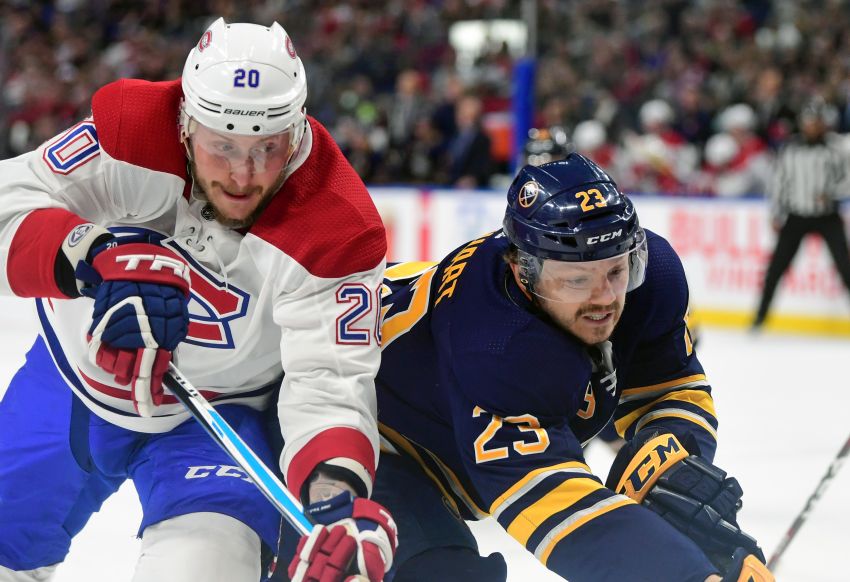 Reinhart’s power-play score in the second period of Monday’s 5-2 loss to the Maple Leafs was his 24th goal and 48th point, new career highs. He has compiled 19 goals and 37 points in his last 41 games, transforming his worst offensive season into his best.

“It’s a little nice knowing I prepared the same way, I’ve done the exact same things to get ready and be way more consistent, because obviously it’s been a good stretch,” Reinhart said prior to the tilt inside the Air Canada Centre. “But even when I wasn’t going well, I was still doing the right things to try to make it turn.

To Reinhart, who had a hat trick in Saturday’s 7-4 win in Nashville, he’s simply been earning more bounces.

A seething Housley paused before answering the question. He clearly wanted to choose his words carefully while still expressing his anger over the NHL’s decision not to suspended Scott Hartnell.

On Saturday, the Predators forward hit Sabres defenseman Victor Antipin from behind, knocking his head into the glass. The rookie was probably out cold before his body hit the ice.

“Well, I do know our player was taken off on a stretcher, has a broken nose, facial lacerations and missing teeth,” Housley said. “So in that respect, I strongly disagree with the NHL decision.

“Being a veteran guy, his job is to body check, that’s really all he does,” he said. “I think he knows where he hits guys and where dangerous spots are. I think he knew that was a vulnerable spot for a player, and to hit him high, he knew the impact was going to be all in his neck and head.”

When the Sabres recalled Matt Tennyson on Monday morning, it appeared they just wanted an extra defenseman for insurance. Nathan Beaulieu was sick, so Josh Gorges played after sitting out three straight games.

But Tennyson wound up playing his first NHL game since Nov. 4. Defense prospect Brendan Guhle has an upper-body injury and is day-to-day. Guhle skated Monday morning.

Housley said the Sabres were just being cautious and he expects Guhle to play Wednesday in Buffalo against Ottawa.

“It’s been one of those things that’s been aggravated,” he said.