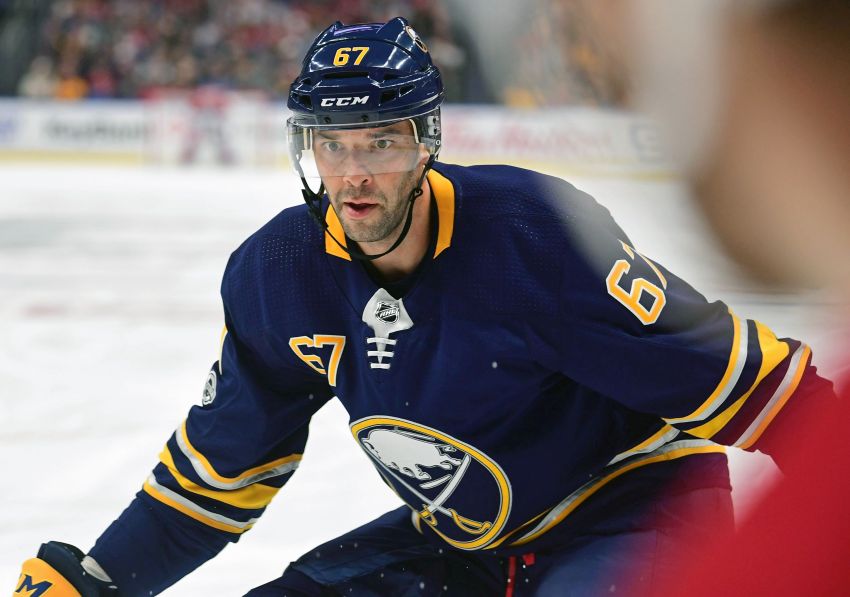 BUFFALO – When the Sabres signed Benoit Pouliot to a one-year contract July 1, it was expected they would utilize the veteran as a utility winger all over the lineup.

Sure enough, nine games into the season, Pouliot has already skated on a slew of lines.

In Saturday’s 5-4 come-from-behind overtime win in Boston, Pouliot mostly played at left wing with center Ryan O’Reilly and Jason Pominville, a top scoring trio. Pouliot scored his first goal this season in the third period with center Sam Reinhart and Kyle Okposo on the ice.

This morning, however, Pouliot practiced at center with Justin Bailey and Jordan Nolan and Zemgus Girgensons, who’s day-to-day with a lower-body injury.

While Pouliot’s willing to play center, a spot he said he has played a couple times, he likely won’t skate there tonight against the Detroit Red Wings

“Wherever they put me in the lineup, I’ll do whatever it takes to do my job, if it’s third, fourth or first, it doesn’t matter to me, as long as I come to work and do what I’m supposed to do,” Pouliot said inside KeyBank Center.

The Sabres expect Pouliot, whose contract was bought out by Edmonton following an awful 2016-17 campaign, to showcase his speed on the forecheck and turn pucks over.

That was evident Saturday against the Bruins, probably Pouliot’s best performance with his new team. In addition to the goal, he also pumped a season-high five shots on goal.

“I skated a little bit more, I think my legs felt better,” he said. “We turned a lot of pucks over, we got in their zone, we played deep and that’s the style of play we want to play. It fits right into my game.”

In injury news, Girgensons, out the last two games after blocking a shot last Tuesday, has “made great strides” and is day-to-day, Sabres coach Phil Housley said.

Justin Falk also joined his teammates this morning, the defenseman’s first practice since a lower-body injury shelved him the day before the season opener.

Housley said the center for Pouliot’s line will be decided before the game.

The Sabres have struggled against the Red Wings for a long time. Incredibly, Detroit is 28-6-1-1 against them since the start of the 1997-98 season.

The Red Wings lost 4-1 on Sunday to Vancouver, a setback that forced coach Jeff Blashill to rip his team’s effort.

“We definitely have to know who our opponent is right now, because they got a thorn up their side right now,” Housley said.