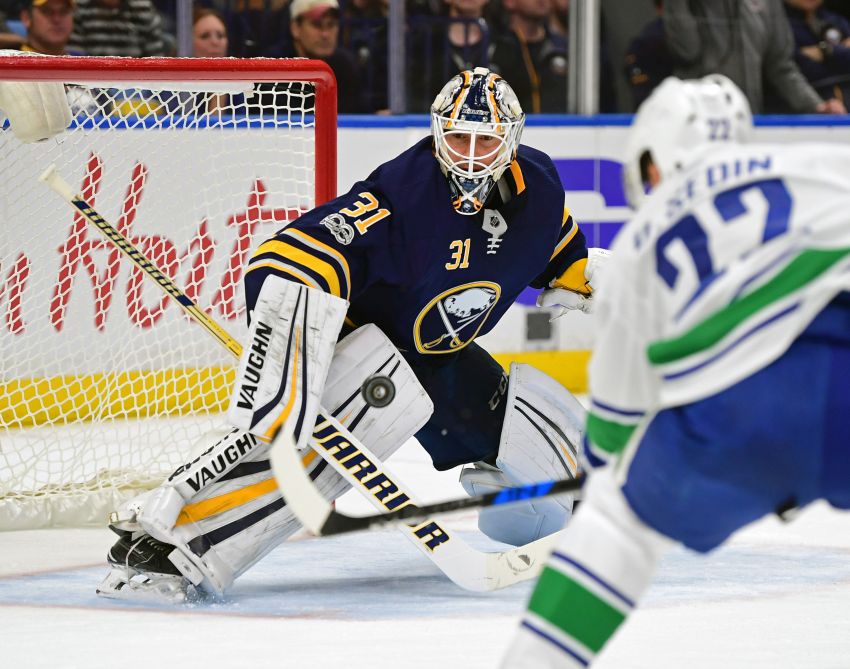 BUFFALO – Through nine games, the Sabres have allowed a whopping 35 goals, the NHL’s second-highest number.

In this defensive era, a figure even approaching three goals a game usually means a team is struggling. The Sabres, who roared back Saturday in Boston to stun the Bruins 5-4 in overtime, have allowed 3.89 an outing.

No wonder they’re 2-5-2 and winless at home in three tries entering tonight’s tilt against the Detroit Red Wings at KeyBank Center.

Thanks to a bevy of defensive breakdowns, Sabres goalies Robin Lehner and Chad Johnson have been facing odd-man rushes and other high-end scoring chances all season.

Goaltending, of course, is supposed to be one of the Sabres’ strengths.

Lehner and Johnson’s current statistics probably reflect the team’s porous defense – the Sabres, for example, have already allowed a stunning six short-handed goals – more than their own power play.

“They’ve given us a chance to win, and even saying that, we’ve been chasing some games, they’ve kept it at a good number where we’ve been able to get back in the game,” Sabres coach Phil Housley said of his goalies Monday. “They’ve been providing us great goaltending.

“We’d like to protect them a little bit better. That’s part of our process and trying to take a look at that (defensive) zone.”

The Sabres’ weak start hasn’t shaken the confidence of either goalie.

Johnson added: “Our position is definitely impacted by a lot of different things, but I feel good about my game and the overall performance, personally, in the game. Obviously, my statistics aren’t where I’d like them to be.”

Lehner, as he often said last season, believes the Sabres can succeed if they follow what Housley and his staff preach.

The Sabres, he said, “have a great game plan set.”

“Then we have the skill to capitalize and win games,” he said. “We got to tighten up a little. … We’ve seen it in periods. When we play the way the coach wants us to play, we’re good and we don’t let up much.”

Naturally, a team with a new coaching staff and 10 new players isn’t going to mesh immediately. Even experienced teams can be raw in October.

Johnson has played for a head coach in his first year with a new team three straight seasons, so he understands the process.

“Early on, there’s always that adjustment, there’s the highs and lows, finding the consistency within that structure we’re developing, the identity,” he said. “It always takes time. I always say it takes about two months before you really see that consistency and that game really unfolds.”

The Sabres could speed up that adjustment if they replicate what made them successful late in Saturday’s exciting win, a tilt they trailed 4-1 in the second period.

“When we defend, ultimately we’ll have the puck more,” Sabres winger Jason Pominville said. “I think that’s what happened in Boston. We were maybe a little loose early where we gave up too many opportunities. As the game went along, we were better and better.”

“That’s a necessity,” he said. “We’re not going to ‘outskill’ anybody. … We stuck with the game plan (Saturday), and we put our heads down and grinded one out.”