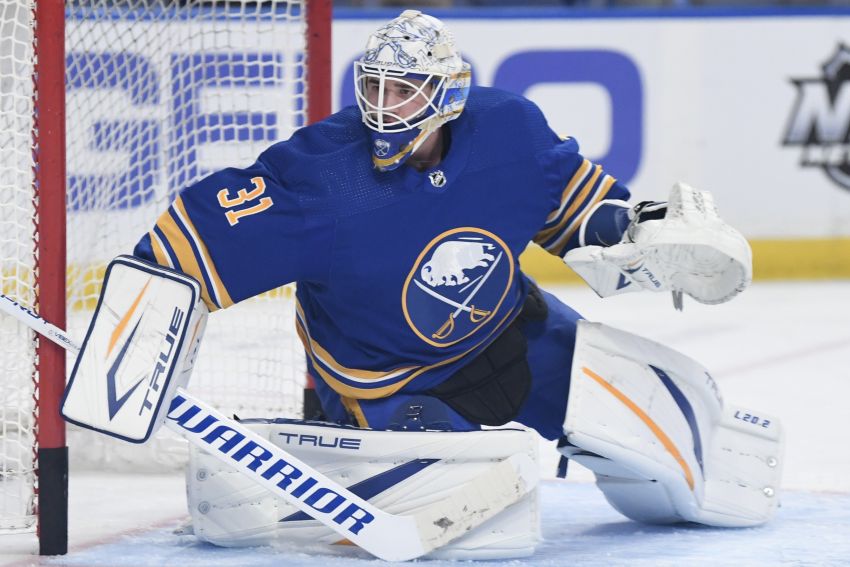 The Buffalo Sabres’ torrid start is starting to feel like a distant memory. Monday’s 5-3 road loss to the Washington Capitals was their fifth consecutive setback.

On Oct. 28, after their 4-3 overtime victory against the Anaheim Ducks, the Sabres ranked second in the Atlantic Division, just three points behind the Florida Panthers. Today, they stand fifth in the division, nine points behind the first-place Panthers.

On Monday at Capital One Arena, the Sabres fell behind just 2:13 into the game and never caught up. It took them nearly five minutes to record their first shot.

Still, the Sabres, who fell behind 2-0 2:30 into the second period, showcased some fight, creeping within one goal twice.

Sabres center Cody Eakin scored 3:43 into the second period, capitalizing after Alex Ovechkin blew a tire in his own zone. Ovechkin made amends about five minutes later, scoring on the power play. The goal was the 741st of his career, tying him with Brett Hull for fourth place on the NHL’s all-time list.

After Sabres winger Anders Bjork narrowed it to 3-2 3:17 into the third period, Tom Wilson’s second goal of the night at 6:45 sealed the game.

“I liked the fight all the way through to the end,” Sabres coach Don Granato said on a Zoom call. “We have to compete. That was one disappointment in our last road game (Thursday), we didn’t have a real high competitive level and we needed that first and foremost. I think there were opportunities in the game that were created and generated and it’s the way we need to play. We need to play aggressive.”

While the Sabres don’t want moral victories, they weathered an early storm and were probably the better team five-on-five over the final 40 minutes.

“For the most part, we competed pretty darn hard and gave them a lot to handle,” Eakin said. “There was times we were pretty dominant in there zone as they were in the first as they were against us.”

Granato said: “(We) could have been overwhelmed after that period but the confidence didn’t break and we were able to do a little bit more in the second two periods.”

The Capitals scored four of their five goals against Sabres goalie Dustin Tokarski on deflections.

“We have to do better,” Granato said of the tips. “First of all, get in the shot lane up at the top. I mean, we had, they’re going by somebody that should be in a shot lane and block a shot. … If not, pressure them quicker so there’s a quicker release so bodies don’t get to the front of the net. Or pressure them quicker so our guys could step out and block them before Ticker has to even see them.”

After sitting out nine straight games as healthy scratch, defenseman Christian Wolanin made his Sabres debut Monday. To make room, they scratched defenseman Will Butcher.

“Will has been playing through some nagging issues and just felt that he needed a break,” Granato said. “Get a little bit healthier, I guess.”

Mark Pysyk moved up to replace Butcher as Rasmus Dahlin’s partner. Meanwhile, Wolanin skated beside Robert Hagg, Pysyk’s partner throughout this season. Hagg, a left-handed shot, played on the right side.

“It’s been a long time for him to play,” Granato said of Wolanin, who played a team-low 8 minutes, 18 seconds. “He’s practiced, he’s practiced hard, he’s in good shape, but there’s nothing like game shape. And, obviously, the atmosphere in the building tonight was much like we saw in Seattle, a loud atmosphere obviously for the home team. … It’s a challenge for him coming in in his situation. But I thought he did fine.”

The Sabres claimed Wolanin, 26, on waivers from the Los Angeles Kings on Oct. 16.

Capitals winger Axel Jonsson-Fjallby, who spent a week with the Sabres during the preseason, made his NHL debut Monday.

Jonsson-Fjallby, 23, couldn’t play any exhibition games with the Sabres because of visa issues, according to the team. The Capitals reclaimed him on Oct. 11 after the Sabres waived him.

The Capitals recalled Jonsson-Fjallby from the Hershey Bears on Sunday.

One thought on “Sabres battle back after slow start, fall to Capitals: ‘I liked the fight’”