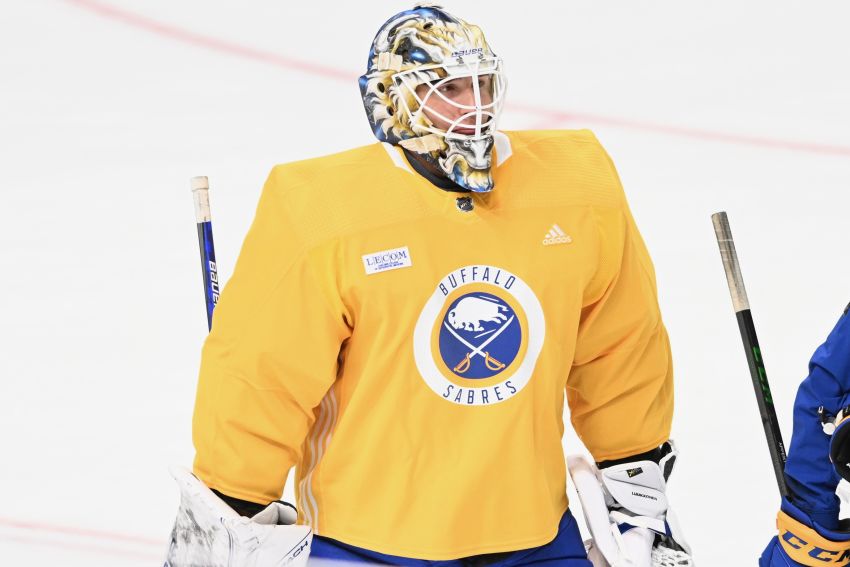 TORONTO – Earlier this year, goalie Ukko-Pekka Luukkonen reached a crossroads in his career. The Sabres, having Craig Anderson and Eric Comrie entrenched in Buffalo, decided the Finnish prospect would begin his fourth pro season in the minors.

If Luukkonen, 23, embraced another stint in the AHL, he could buoy his development. If he pouted, well, who knows what might happen?

Right away, he decided he would use his time with the Rochester Americans to his advantage.

“When you’re in the NHL trying to win games, you kind of lose that (development) focus,” said coach Don Granato, whose Sabres have lost seven straight games. “For him to embrace that is really key because it has accelerated his development. He is better every time, every day down there. He’s made himself better every game. He’s fought harder in practices … with the vision of once he established himself here, he’s going to be judged and rated a whole lot differently. His focus is going to be different.”

That focus has changed because Luukkonen’s back in the NHL.

While Comrie recovers, the Sabres could utilize Luukkonen, a youngster labeled as their goalie of the future, as their starter. Anderson, 41, has transitioned into a backup role this season, and the Sabres make sure he receives as much rest as possible.

He played all of Tuesday’s 5-4 loss to the Vancouver Canucks and relieved Comrie about halfway through Wednesday’s loss, so it seems likely Luukkonen will start tonight against the Maple Leafs at Scotiabank Arena.

Luukkonen, who was recalled Thursday, has played well in his limited NHL action, just 13 appearances over the last two years. Last season, he performed splendidly during his nine-game stint in December and January, compiling a 2-5-2 record with a 2.74 goals-against average and a .917 save percentage before suffering an injury and later returning to Rochester.

“I talk a lot about confidence, and that, for sure, helps,” Luukkonen said following Friday’s practice at KeyBank Center of his time in Buffalo last season. “I kind of get that feeling from those games that I’ve been able to do it before, play well at this level. It’s time to show it again. But in the end, last year doesn’t matter if you don’t play well this year.”

Fresh off a terrific training camp in Buffalo, Luukkonen enjoyed a strong opening month with the Amerks, although his stats don’t quite tell the full story. He has a 6-3-0 record despite a 3.07 goals-against average and an .898 save percentage.

He has allowed three or fewer goals in seven of his starts. After giving up six in just over 47 minutes of action on Oct. 28 against the Laval Rocket, he bounced back by winning his next three starts.

In his last outing Nov. 9, he stopped 34 shots in a 3-1 road win over the Syracuse Crunch.

“There was a couple of games I was not too happy about,” said Luukkonen, who battled the flu last weekend and missed both games. “But overall, I think I’ve been able to help the team win and that’s the most important thing, and kind of, most of the games be the backbone of the team. So I feel like it’s been a good start to the season.”

Granato said the 6-foot-5, 217-pound Luukkonen looks different in his crease this season.

“His fitness coming into the season, you still see he leaned down a bit,” he said. “His agility, his ability to get in and out of low positions and movements are just sharper, more efficient while expending less energy as well. … Those are really big strides.”

With a snowstorm battering the Southtowns late Thursday into Friday and potentially hitting metro Buffalo, the Sabres weren’t sure if they’d be able to practice before leaving for Toronto. They even looked into skating at Niagara University in Lewiston.

“It felt like we were back in COVID, it did with just so many unknowns,” Granato said. “It felt a little bit like you’re coming back at Christmas break even with wondering if guys could get to the rink this morning. … But it’s not unfamiliar, I don’t think it’s unfamiliar for our guys and I loved the practice. The guys were excited to be out there. Played with pace that we haven’t had and energy that we haven’t had.

Granato said he was “a little more vocal” pushing his players for a higher pace and tempo.

“Which I think we have gotten away from the last little bit,” he said.

How poor were the road conditions? It took them one hour and 35 minutes to get to the rink!

Lyubushkin spent the second half of last season with the Leafs.