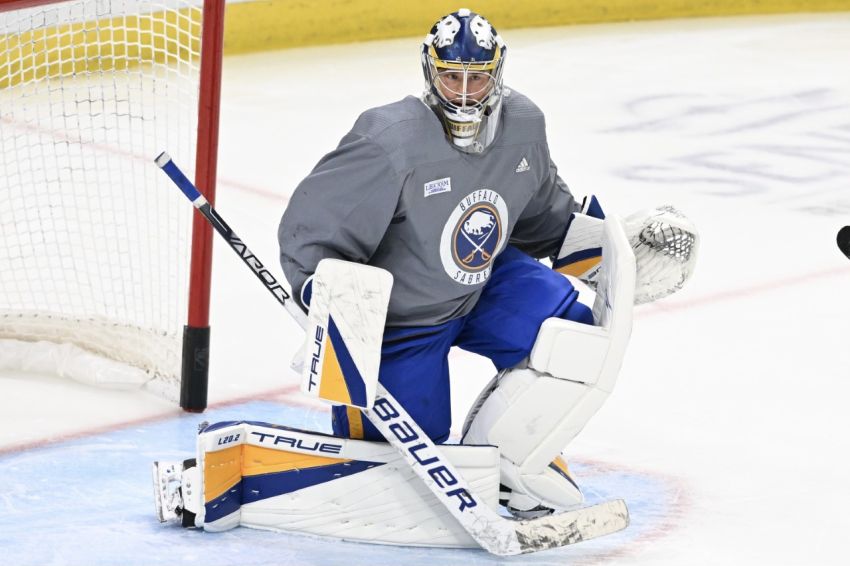 BUFFALO – Following an eight-day rest, goalie Eric Comrie will likely make his Sabres debut this afternoon, the first of perhaps 50 starts he could earn this season.

The Sabres awarded Craig Anderson, 41, Thursday’s season opener, and the veteran enjoyed a terrific night, stopping 35 shots in a 4-1 win over the Ottawa Senators.

This season, however, the Sabres expect Comrie, 27, to emerge as their No. 1 goalie. Having established himself as a top backup with the Winnipeg Jets last season, they believe he’s ready to graduate to a more demanding role.

Anderson, the NHL’s oldest player, needs regular rest and recovery time. His days of handling a 45- or 50-game workload are almost certainly over.

Today’s contest against the Florida Panthers gives Comrie his first chance to prove he deserves a promotion.

“The opportunity that’s arisen for him here is you’re going to earn as much ice time as you can get,” Anderson said following Friday’s practice at KeyBank Center. “There’s not a $6 million goalie in front of him right now. There’s a guy who’s 41 years old who’s going to need some maintenance days. He’s from time to time going to step up and carry the mail.”

Comrie has limited NHL experience. He played 19 of his 28 career games last season, compiling a 10-5-1 record with a 2.58 goals-against average and a .920 save percentage.

His strong work spelling Connor Hellebuyck, the 2019-20 Vezina Trophy winner, helped convince the Sabres to sign him to a two-year, $3.6 million contract as a free agent on July 13.

In his first weeks in Buffalo, the 6-foot-1, 175-pound Comrie has made a positive impression on the Sabres.

Granato said when he talked to Comrie about playing some preseason road games, he said wanted them.

“He said, ‘I would prefer to play a couple on the road, that’s usually a better lineup, a better challenge,’” Granato said.

Not surprisingly, Comrie lost both games, allowing 11 goals, including seven in last Friday’s loss to the Pittsburgh Penguins, his final exhibition outing.

Comrie paid plenty of dues to earn his chance with the Sabres, playing 207 AHL games. After being a part of four organizations over a two-year stretch – he was claimed on waivers four times – he finally stuck in the NHL last season.

“He’s ready for the challenge and he’s proved that with his work ethic and prior appearances in the league,” he said. “The organization went out and got him for a reason. This is the opportunity that he’s been looking for and now the ball’s in his court. We’re all looking forward – I’m looking forward – to him stepping up here and carrying on the winning feeling that we started last night.”

Anderson’s willingness to help Comrie and allow him to seize his chances means a lot to him.

“He’s a great human being, great goalie, you saw how well he played last night,” Comrie said. “He played an unbelievable game and he’s going to continue to play as good as he can. That’s the way he is. For myself, just trying to learn from him as best as I can. Just keep getting knowledge and knowledge. He’s really open to talking to me, which is great for myself.”