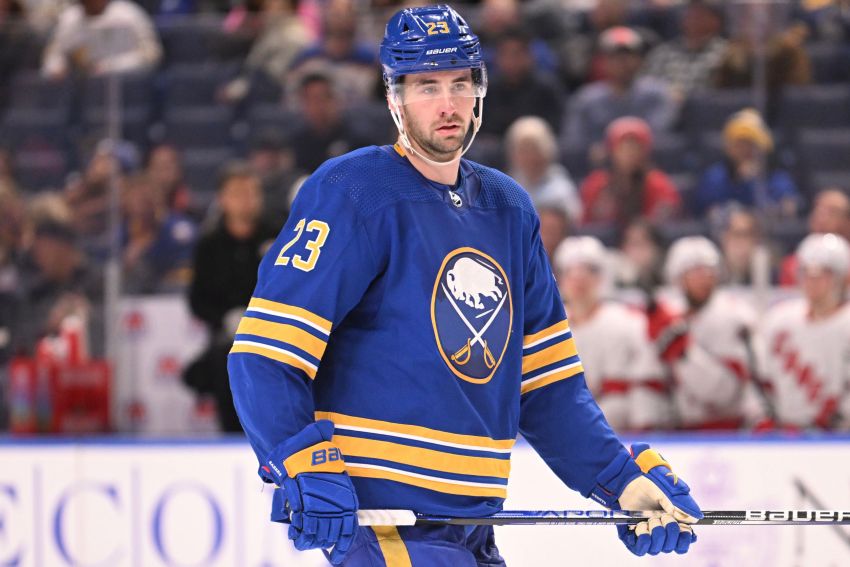 TORONTO – Following Friday’s practice, Buffalo Sabres coach Don Granato said if defenseman Mattias Samuelsson wanted to return from an 11-game absence tonight against the Maple Leafs, he would have to convince him he was ready right now.

But Granato had already made up his mind that Samuelsson needed more practice time after suffering a lower-body injury Oct. 22.

“He wasn’t going to convince me, he wasn’t,” Granato said after the Sabres prepared for tonight’s game against the Toronto Maple Leafs.

While Samuelsson, who has missed the last 11 games, began skating with his teammates on Tuesday, he has only had one full team practice. So it’s more likely he will play Tuesday against the Montreal Canadiens or Wednesday versus the St. Louis Blues.

“I want him to have some more practice time,” Granato said in Scotiabank Arena. “I think that’s important coming off the injury he had and the length. I don’t want to make a desperate decision, and we’re not in a desperate situation, despite what may be perceived. We can’t afford to be putting him in until he’s ready to go, and I just don’t think he’s ready to go yet at the level he wants to play at and I want him to play at. But I think it’s only a matter of a couple more practices or a little bit more time.”

In other lineup news, goalie Ukko-Pekka Luukkonen will start tonight, his first NHL appearance since Jan. 11. The Sabres recalled the Finn after Eric Comrie suffered a lower-body injury Wednesday.

Granato said he hasn’t decided on tonight’s sixth defenseman. Casey Fitzgerald, who has been scratched the last two games, could move in.

After a slow start, the rookie feels his “game’s been kind of building a bit.”

“I don’t think it’s going to be a straight trajectory of every game better and better,” said Quinn, who has recorded one goal and five points in 12 outings. “There’ll be some ups and downs and, I think, some good games and some games where I’m not at my best. But in general, I feel really comfortable out there.”

Quinn skated this morning at left wing beside center Dylan Cozens and rookie JJ Peterka. With Quinn back, winger Anders Bjork will be scratched tonight.

In other news, Sabres assistant coach Marty Wilford, who missed Friday’s practice as a snowstorm battered Buffalo’s Southtowns, was on the ice this morning.