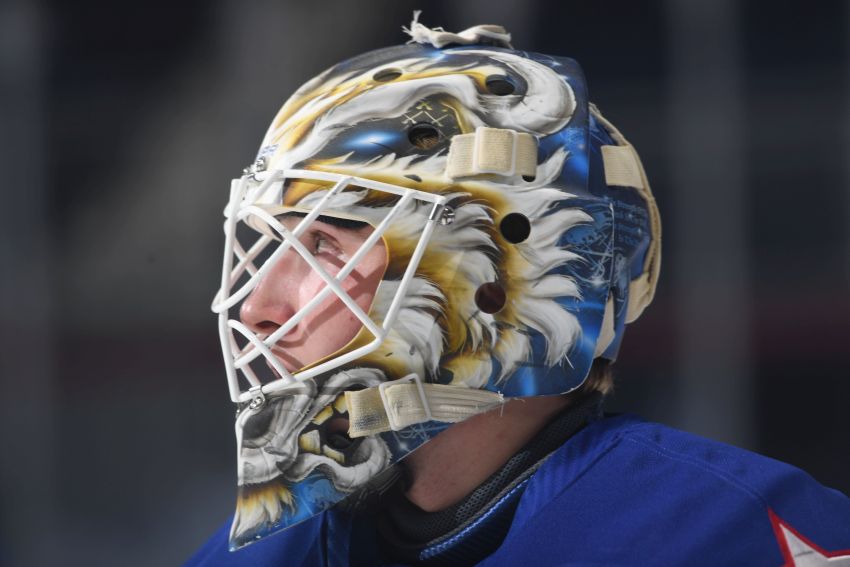 ROCHESTER – Out of his element, up in the stands watching his Americans teammates compete in the Calder Cup Playoffs, goalie Ukko-Pekka Luukkonen sometimes feels a little jittery.

“I think I’m 10 times more nervous watching it upstairs than when I’m in the goal,” Luukkonen told the Times Herald on Wednesday after the Amerks prepared for Game 3 of the AHL North Division final at Blue Cross Arena. “So that’s the tough part of it.”

Luukkonen, a prospect labeled as the Buffalo Sabres’ goalie of the future, has watched his team’s entire postseason run recovering from a lower-body injury he suffered in the regular-season finale.

Naturally, the Finn, 23, is thrilled the Amerks have enjoyed so much success, winning two postseason series for the first time 2004.

“On the other hand, of course, when you go out with the injury just before the playoffs … you’re part of it, but still, you’re not in the games,” Luukkonen said.

But if the Amerks win Wednesday’s game against the Laval Rocket and stay alive in the best-of-five series, he could be an option for Game 4 on Friday. In his absence, veteran goalie Aaron Dell has started all nine playoff games.

“Having played the position, it’s hard because it’s not like a forward or defenseman where you’re like, ‘Oh, I’m only at 80 percent and I can go out and play and if I’m not playing that well, we have other guys,’” said Appert, who played goalie in college. “If you’re a goalie, and you’re not 100 percent confident that you can help your team win, then you’re really putting your team at a disadvantage.

“There’s a little bit of that you have to navigate physically and mentally on the way back.”

Luukkonen, who said he feels “very good,” was injured April 29 when Utica Comets captain Ryan Schmelzer, a Canisius College product, hit him in his crease.

By late April, the 6-foot-5, 217-pound Luukkonen had found a groove, tending his best goal for the Amerks all season.

“I was really (ticked) off,” Luukkonen said of suffering his second significant injury this season. “It was a collision and (the) last game of the season, and I feel like it was kind of an unnecessary situation I feel like could’ve been avoided. But in the end, it’s hockey, and everybody plays hard.”

Luukkonen underwent hip surgery prior to his rookie campaign in 2019-20, and he started the season a month late in the ECHL. He played just 10 games for the Amerks before the COVID-19 pandemic forced the AHL to cancel the remainder of the season.

Still, he earned his first recall to the Sabres, and he looked impressive before suffering a season-ending left ankle sprain.

Luukkonen performed inconsistently for the Amerks early this season, winning AHL Player of Week honors in mid-November in the midst of a slow start.

But the Sabres summoned him in early December, and he enjoyed a terrific nine-game stint, compiling a 2.74 goals-against average and a .917 save percentage before he sustained a lower-body injury Jan. 11.

“It helps with your confidence, you kind of prove to yourself that I can play at this level,” Luukkonen said of performing so well in the big leagues. “It gives yourself that little bit of extra kick and you know that you have the possibility to play there. So it’s only up to you to work and make it there.”

When Luukkonen recovered after a month, the Sabres sent him to Rochester, where he struggled until late March.

Overall, Luukkonen compiled a 15-14-6 record with a 3.28 goals-against average and a .900 save percentage in 35 games with the Amerks this season.

Right now, consistency might be Luukkonen’s biggest hurdle. In the AHL, a developmental league that features less structure, it can be harder to find.

“And I feel like the consistency’s easier to find when you’re playing in Buffalo or in the NHL,” he said. “It’s easier – bigger crowds, of course, it’s the NHL, that’s where everybody dreams of so, kind of, when you’re here, it’s more up to yourself to bring that and find that. … You kind of figure it out yourself, so I think that’s one of the learning points I’ve been doing this year.”

Appert said adversity like Luukkonen has experienced can fuel growth “if you look at it the right way.”

“He does look at it the right way, whether it’s injury, adversity or struggles in the net or whatever that is,” Appert said. “He had a tough start to the season, he didn’t shy away from it. He just worked harder and improved.”