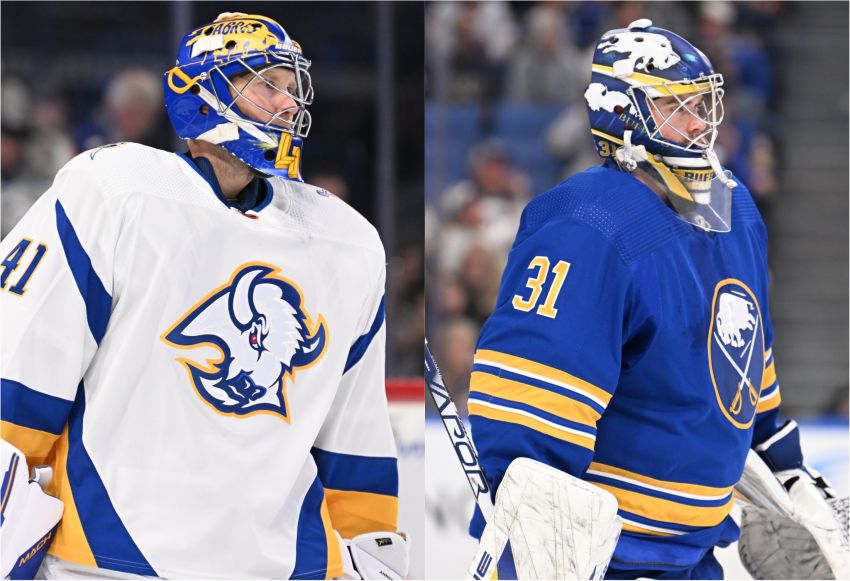 BUFFALO – Following a terrific 27-save outing, Sabres goalie Craig Anderson will likely return to the bench tonight, backing up Eric Comrie against the Vancouver Canucks.

At 41, Anderson, the NHL’s oldest player, has tended some remarkable goal during the first month of the season, defying his advanced age.

Among goalies who have played at least five times this season, his 2.40 goals-against average ranks 13th in the NHL and .922 save percentage 11th. Despite starting just five of the Sabres’ first 14 games, he has earned three of their seven wins.

But coach Don Granato, whose Sabres have lost five straight games, said he hasn’t been tempted to use the veteran more frequently.

In his 20th season, Anderson can no longer handle a heavy workload and the rigors that accompany the No. 1 job. His terrific early-season play, Granato said, can be traced to the rest and recovery time the backup role gives him.

Anderson has enjoyed at least a six-day break between every start this season.

“It’s really rest with him,” Granato said following Monday’s practice at KeyBank Center. “He’s got to be fresh. “If he’s fresh, when we see him excel, even last year, it’s (because he’s) fresh. And it takes a little bit more.

“We all know how it is when you age. It’s different than five years prior, especially at this level.”

The affable Anderson, who played 32 times last season while battling injuries, understands if he wants to perform at a high level, he must embrace a backup role.

“That’s kind of the main thing, is just kind of make sure that I’m as close to 100 percent as I am, as I can be when you get in there,” he said. “We’ve done a great job managing the load as far as practice, games and off ice.”

Anderson looked sharp from the get-go this year, stopping 35 shots on Oct. 13 in the Sabres’ 4-1 opening night victory over the Ottawa Senators. In Saturday’s 3-1 loss to the Boston Bruins, he gave the Sabres a chance to defeat one of the league’s elite teams.

He spent 10 seasons with the Senators, becoming a franchise legend. He hasn’t played in Ottawa since departing two years ago, so it seems like a safe bet he’ll play when the Sabres complete a back-to-back set there Wednesday.

Without Comrie, 27, the Sabres wouldn’t have the luxury of utilizing Anderson about once a week.

Comrie, who signed a two-year, $3.6 million contract on July 13, had never started regularly in the NHL until this season. A year ago, he played a career-high 19 contests as a backup with the Winnipeg Jets.

Those numbers, of course, don’t wow you.

“Stats are stats, but I try to get the wins for the team, that’s all that matters,” Comrie said.

Still, Comrie has been a difference-maker at times. He made 46 saves, including 22 in the third period, on Oct. 18 in a 4-2 road win over the Edmonton Oilers. He stopped 40 shots on Oct. 20 in a 6-3 road victory against the Calgary Flames.

During recent games, he has faced a barrage of high-quality chances and endured some bad luck. In Thursday’s 7-4 loss to the Vegas Golden Knights, he stymied two early breakaways by Jack Eichel. In last Tuesday’s 4-1 setback to the Arizona Coyotes, two goals deflected in off teammate Dylan Cozens.

Comrie’s scoring chance save percentage this season is .858, according to hockey-reference.com, a drop from .913 last year.

Granato said being a No. 1 goalie is “still uncharted territory” for Comrie.

“He’s still evolving in that role as the No. 1 guy or the guy we go to for more games,” he said. “He can handle the workload, so I think it’s still a process for him. … He hasn’t been there yet. So he might have the confidence he can do it, but it’s got to become conviction after experience happens. He’s working toward that.”

In their first weeks together as teammates, Anderson said he has noticed Comrie’s “work ethic and positivity.”

“Those are two things that you can control and he does that excellent, probably better than most goalies that I’ve ever seen or most players that I’ve ever seen,” he said.. “… Sometimes the statistics don’t always tell the true story. He’s gone in there and made some huge saves for us and given the team a chance to win when he’s in there.”