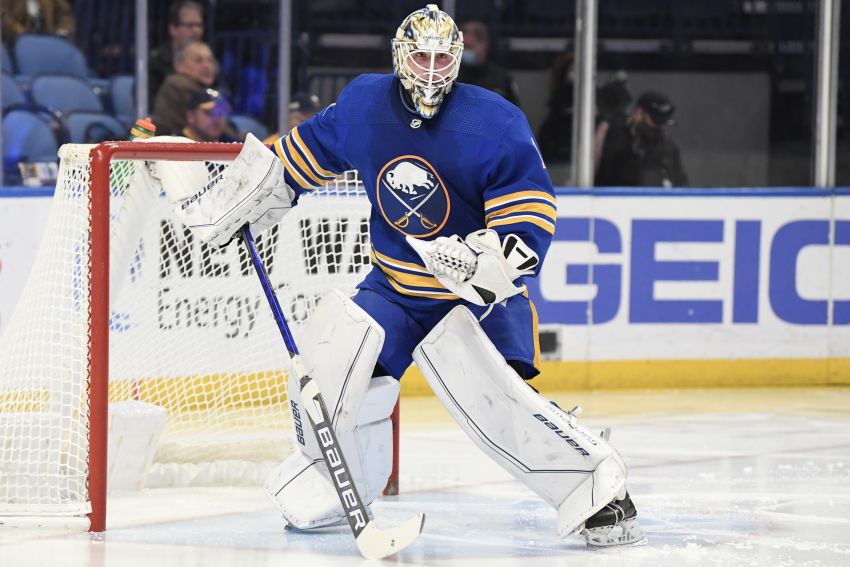 BUFFALO – Ukko-Pekka Luukkonen’s stay here figured to be short. In the midst of a goaltending crisis, it appeared the Finn might play a few games before the Sabres returned him to the minors, where he would continue his development.

But Luukkonen, a prospect considered the Sabres’ goalie of the future, has been making a very strong case to stay put when some netminders are ready to play.

Luukkonen, 22, performed superbly in three starts last week, compiling a 1.98 goals-against and a .938 save percentage. But those terrific numbers resulted in zero wins. The Sabres scored just four goals for him.

Still, if Luukkonen keeps up his recent exploits, the Sabres, who have lost seven straight games (0-5-2), will likely start winning some contests.

Luukkonen helped inch the Sabres closer to that elusive victory Saturday, making a career-high 40 saves in their 3-2 shootout loss to the Washington Capitals before 9,554 fans inside KeyBank Center.

“His efforts were outstanding, the wins will follow,” Sabres coach Don Granato said.

Granato acknowledged after the Sabres earned their first point since Nov. 27 that Luukkonen could keep earning more starts when some goalies are healthy.

“But he won’t come out of a development phase, he’s 22,” Granato said. “So I say that with a smile because the ceiling … is really high, it’s not even close to it. But to see performances like tonight and the last couple nights is great. The control, the confidence, he’s in the moment, he’s reading shooters.”

Granato said “you have to keep your mind open every time we have guys up.”

“That’s what you want,” he said. “It’s an opportunity for us to see where they’re at and he’s looked very good.”

“I can only play and practice as well as I can,” he said. “In the end, it’s somebody else’s decision, but I’m happy with how the week went personally for me.”

Luukkonen looked so impressive Granato utilized him on back-to-back nights, starting him again after his 29-save performance in Friday’s 2-1 home loss to the New York Rangers.

“I’m happy I was given the chance to go again tonight,” said Luukkonen, who has played seven NHL games. “Some say it’s hard for the goalies (to play back-to-back), but you see the games come really fast and I think we played really well today, so that helped a lot.”

Granato said the 12 games Luukkonen played for the Rochester Americans earlier this season – he won AHL Player of the Week honors but had just an .888 save percentage – helped him reach this point in his development. After playing his first four NHL games late last year, he looked underwhelming in training camp.

“He looks a lot different than he did in training camp, quite honestly,” Granato said. “I mean, you guys saw camp. He had time in the NHL last year, the whole summer, he comes in, whatever goes through you head and pressure you put on yourself in training camp, and he was able to recalibrate, refocus in Rochester, use all that experience – or those experiences – to add to the performance I believe he had the last three games now.”

Saturday’s game was arguably Luukkonen’s best in the NHL. He made two huge third-period saves, first on Evgeny Kuznetsov with the Capitals on the power play and later on ex-Sabre Conor Sheary.

While Luukkonen has consistently looked calm and composed, he dove to stop Kuznetsov.

“That’s one of those where you just try to get something in front,” Luukkonen said. “It’s not something they really teach you, but it’s a lucky bounce or whatever happens in front.”

The Sabres had some unlucky bounces in the shootout, hitting the post twice. Winger Victor Olofsson scored their only shootout goal. T.J. Oshie’s third-round goal sealed the Capitals’ win.

“Out of the last bunch of games, that was the most we played like ourselves and how we want to play,” Hinostroza said. “Obviously, we would like to get the win there, but there’s so many positives in that game. That’s how we want to play. If we play like that, we’re going to start getting a lot more wins here.”