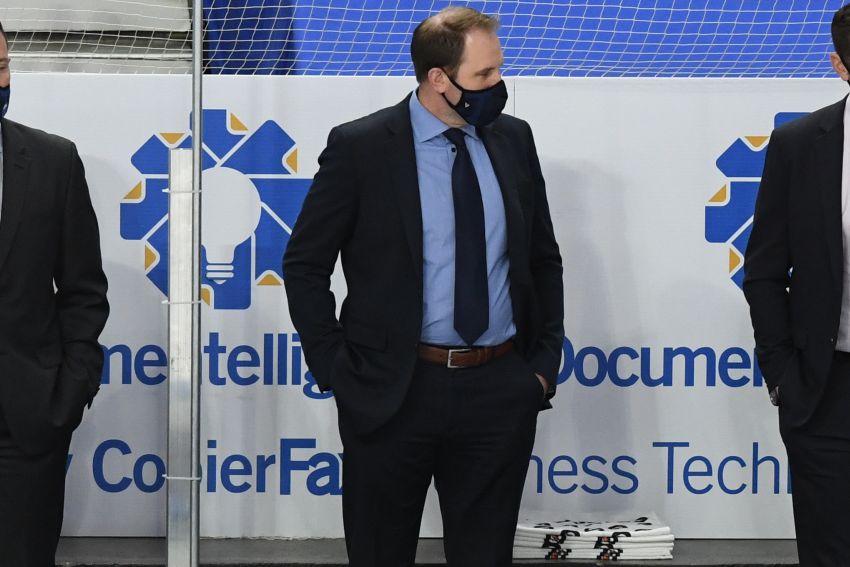 Matt Ellis will move behind the bench permanently. ©2021, Micheline Veluvolu

In addition, Justin White has been named video coordinator. Assistant coach Mike Bales, who’s charge of the goalies, and video coach Myles Fee will remain with the Sabres this season, according to the team. Both were hired by ex-coach Ralph Krueger.

Dan Girardi, an interim assistant coach last season, has returned to his job as a player development coach. Sabres general manager Kevyn Adams said Girardi couldn’t commit to staying on because of his personal situation.

“He’s going to be involved in some way, shape or form in the organization,” Adams said Thursday inside KeyBank Center. “He wants to be, we want him to be, we know he’s valuable.

Meanwhile, Adam Mair, an assistant coach with the Rochester Americans last season, has replaced Ellis as the Sabres’ director of player development.

Ellis stayed in his development role after moving behind the bench on an interim basis when the Sabres fired Krueger on March 17.

Adams said he worked with Granato to hire the staff.

“I know how critical the coaching room is and the relationships, how much time you spend together and the trust you have to have under pressure with each other,” said Adams, a former assistant coach. “So I think first and foremost it’s absolutely critical that Donnie feels the comfort level with the guys around him and the staff, but I also was part of the process. I interviewed the people we brought in as well.”

Granato knows Christie 52, and Wilford, 44, having coached them during their playing days in the ECHL.

Christie, 52, was a player-coach under under Granato with the Columbus Chill and Peoria Rivermen. They won a Kelly Cup together in Peoria in 1999-00, Christie’s last season as a forward.

He was also an assistant coach on Granato’s AHL staff during his 86-game run leading the Chicago Wolves.

Granato coached Wilford, a defenseman, with Columbus in 1997-98. Wilford spent seven seasons as an assistant coach with three AHL teams – the Syracuse Crunch, Norfolk Admirals and San Diego Gulls – before beginning a three-year stint as an assistant with the Anaheim Ducks in 2018-19.

“In Marty and Jason, we’ve added two quality people and coaches to our organization. Their experience at multiple levels of pro hockey will be crucial as we implement our vision for this team,” Granato said in a statement. “We are also excited to bring back Matt Ellis, Mike Bales and Myles Fee, and add Justin White to our group to continue building on the progress of last season. I’m confident in the passion and intensity they will all bring to the rink each day and their ability to get the best out our players and team.”