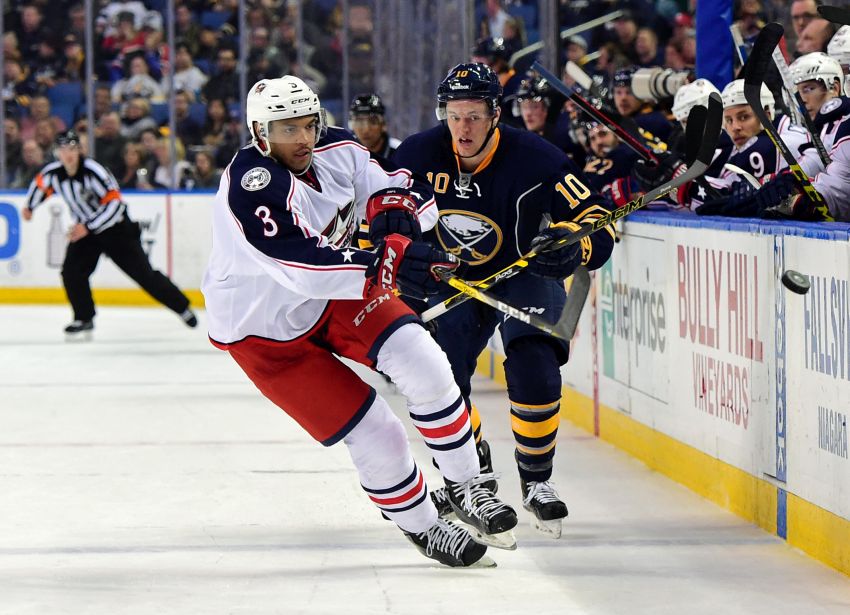 BUFFALO – In the first days of the season, Cole Schneider, an undrafted winger with two games of NHL experience, not an established veteran or hotshot prospect, has emerged as the biggest standout in Sabres training camp.

After scoring a hat trick in the first scrimmage and a one-goal, two-point performance the next day, Schneider, 26, could already have an inside track to earn a roster spot as the 12th or 13th forward.

“He’s taking the opportunity right now to show he can make plays and he is a guy who can be counted on to put the puck in the net,” said coach Dan Bylsma, whose Sabres open their preseason home schedule tonight against the Ottawa Senators inside KeyBank Center.

Despite consistently scoring 20 goals and 50 points in the minors, Schneider, a Williamsville native, toiled in relative obscurity for the Binghamton Senators until the Sabres acquired him in a seven-player AHL trade Feb. 27.

Schneider impressed the Sabres so much with the Rochester Americans they recalled him for the final two games, the St. Joe’s graduate’s first big league outings after 287 AHL appearances.

“Sometimes a fresh set of eyes and a fresh look on a player is what a player needs,” Bylsma said. “He got a little bit of that last year going to Rochester.”

Bylsma has learned Schneider, who barely says a word about himself, possesses a quiet demeanor on and off the ice.

“He’s shown a lot of kind of what I’ve heard about him coming to our organization last year, the player he was,” he said. “He’s not the fleetest afoot, he’s not the fastest skater. But he’s got good hands, can make plays, he’s good around the net. He showed that a lot in the first three days.”

The final two forward positions figure to be the most contested spots in camp. Bylsma believes as many as seven players – from top prospects to young veterans like Schneider – are in the mix.

“I’m very intrigued, and we’re not just looking at one player,” Bylsma said.

The expected names – prospects Nick Baptiste, Justin Bailey, Hudson Fasching and Alexander Nylander – are in that group. With Jack Eichel just back from the World Cup of Hockey and Ryan O’Reilly still competing, some players could receive a longer look at center.

Here’s a closer at some of the others competing for the open spots:

“Every year you take strides,” Grant said. “I think going into last year my focus was shoot the puck more. I started to do that early and good things started to happen.”

However, Grant, 26, hasn’t produced points at the NHL level, mustering only one assist in 15 games with the Calgary Flames last season and three points in 40 career games.

“I didn’t produce at the NHL level like I hoped I would,” Grant said of last season. “I was able to contribute in a different way.”

Grant, who believes he plays “a strong defensive centerman kind of game,” knows Schneider and Sabres general manager Tim Murray from his time with the Ottawa Senators.

“He can skate and move around,” Bylsma said. “He’s excellent positionally, smarts-wise. There’s been determination to the way he’s worked and played.”

Catenacci earned his first NHL action in his third pro season in 2015-16, mostly as a fourth-line center. To crack to the Sabres, he needs to showcase his speed and be an agitator.

While Catenacci, 23, went pointless in 11 games with the Sabres, he developed confidence.

“Getting a taste last year, I knew that I could play there and do well up there, so this summer I just had the confidence of coming in and earning a spot out of training camp,” Catenacci said.

Given O’Reilly has already earned some trust from Bylsma, who also coached him briefly with the Pittsburgh Penguins, he could be a favorite to stay in Buffalo.

“Being up here a lot last year and playing a lot of games showed them I could play,” O’Reilly said.

Rodrigues, a free agent from Boston University, played his first two NHL games in 2015-16, scoring a goal in the season finale. As a pro rookie, Eichel’s high-scoring college winger had nine goals and 30 points in 72 AHL games.

While Rodrigues is often overshadowed by youngsters the Sabres drafted, he’s quietly one the team’s better forward prospects. His tenacity and work ethic has impressed Bylsma.

A small taste of the NHL was special.

“I think maybe I pushed myself just a little bit harder in the summer just having that experience and knowing what it’s like at the next level,” Rodrigues said.