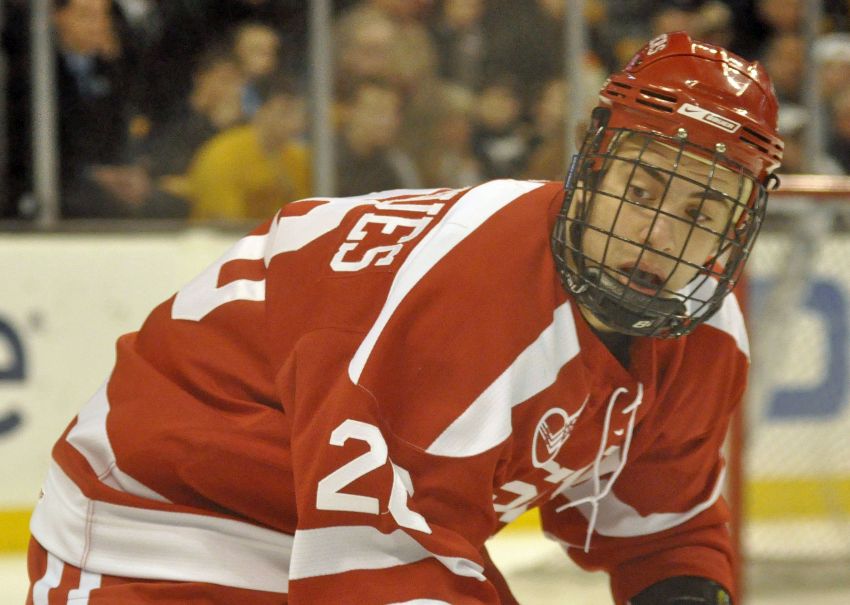 BUFFALO – Yes, Evan Rodrigues said, he thought about potentially playing with Jack Eichel again before signing a two-year, entry-level contract with the Sabres. But there was more to the 21-year-old winger’s decision than being reunited with his slick Boston University linemate.

Rodrigues chose the Sabres before Saturday’s NHL Draft Lottery guaranteed them the second selection in the upcoming draft, a pick they will almost certainly use to select Eichel, whose talents could potentially change the franchise.

The undrafted free agent whittled his list of teams from six to two before deeming the rebuilding Sabres, who must fill several forward spots before next season, the best fit.

“I see potential that’s there,” Rodrigues, who’s from Toronto, told the Times Herald by phone Wednesday after the deal was announced. “Obviously, my hometown isn’t too far from there. I think it was just when you put it all together with the opportunity, it was just one I felt was right for myself. I can’t wait to start.”

Still, Rodrigues knew playing with Eichel again “was a possibility that would be exciting.”

Rodrigues, whose Terriers lost the national championship game April 11, just finished a breakout senior season, scoring 21 goals and 61 points in 41 contests. Only Eichel, who centered Rodrigues throughout the second half, compiled more points in the NCAA.

How much did Rodrigues improve in just a year? He had 21 goals and 60 points in 105 games over his first three seasons. A year ago, as the Terriers bottomed out with a 10-win season, he had five goals and 14 points in 31 appearances.

Confidence helped buoy Rodrigues, who will graduate from BU’s business school next month. His coaches told him after last season they expected him to have a huge senior campaign.

“I had a really good, solid sophomore year two years ago, and then last year, obviously, I think from the top to bottom it just didn’t go the way it usually does,” Rodrigues said. “I think this year was just a bounce-back year for our whole team. We had obviously great incoming freshmen, but we had a lot of guys step up this year.”

The 5-foot-11, 179-pound Rodrigues stepped up all season, showcasing some clutch and dynamic offensive abilities. He scored the winning goal late in BU’s 3-2 NCAA Tournament win against Minnesota-Duluth in the Northeast Regional final, had a hat trick Feb. 27 and tied a school-record with six assists Jan. 30.

Of course, that offense might not translate to professional hockey. Rodrigues believes he’s more than a scorer, however.

“I think I’m an extremely smart player who can play in all situations,” he said. “I believe I have the skill level to be a power-play guy. But I also believe I have the intelligence and the work ethic to be a shutdown guy and a PK guy. Really, any situation I’m put in I can excel at, and I think that’s one of my strengths.”

“He’s a special talent,” Rodrigues said. “He gets a lot of recognition. He deserves every second of it. He makes the players around him better. I think the first game we started playing together we had a lot of chemistry. I think we always just enjoyed playing with one another.”

What makes Eichel so special? An “effortless ability,” Rodrigues said.

“People always talk about his skating, but until you see him up front, you don’t really appreciate it as much as I think you want to,” he said. “He’s just effortless out there. He’s extremely strong on the puck. He just has that ability to kind of take over a game. He’s a special player. I’m sure people will get to see that next year.”

But will they see Eichel in Buffalo or back at BU? The 18-year-old said Saturday he wouldn’t decide his future until after the draft in June.

“But at the end of the day, it’s going to be his decision, something that he has to feel comfortable doing,” he said.

It’s unclear where Rodrigues, who played left wing beside Eichel and Danny O’Regan, could fit in Buffalo’s lineup. He can also play right wing and grew up playing center. Rodrigues might be ticketed for AHL Rochester next season.