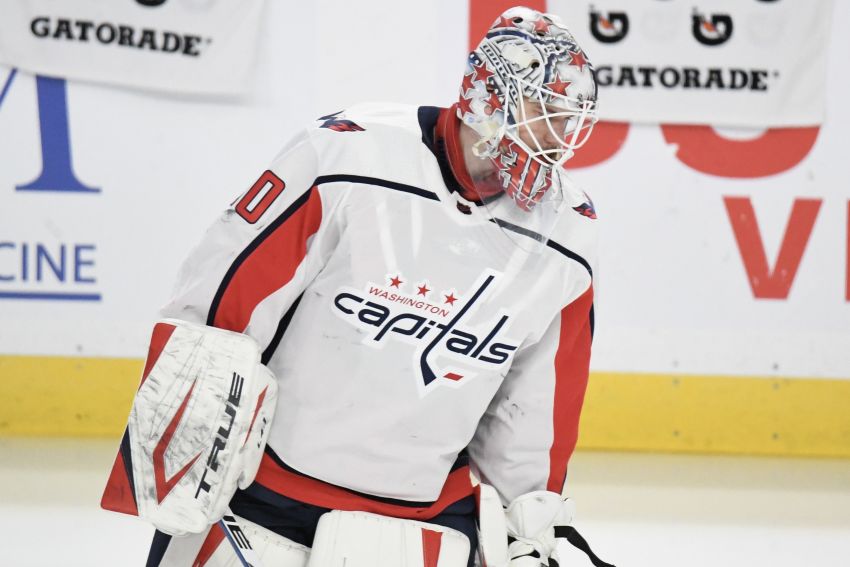 Ilya Samsonov could be interesting goalie for Buffalo to pursue. ©2022, Micheline Veluvolu

BUFFALO – The Sabres possess a stable of strong goaltending prospects.

Ukko-Pekka Luukkonen, a Finn labeled as the Sabres’ goalie of the future, has looked impressive in his limited NHL action. While he has battled injuries and struggled at times in the minors, he’s still a terrific young talent.

The Sabres also boast Devon Levi, the NCAA’s top goalie last season at Northeastern, and drafted Topias Leinonen in the second round on Friday, 41st overall.

And they have Erik Portillo, who’s returning to Michigan for his junior season. There’s a belief the Sabres will trade Portillo’s rights – the Swede was drafted by the team’s old regime – or he could bolt next year as a free agent.

Still, Portillo will be at development camp this week at LECOM Harborcenter with Levi and Leinonen.

One of those prospects could someday emerge as a starter for the Sabres. The problem is they need another goalie right now.

As free agency opens today, the Sabres’ roster is almost set for the upcoming season. Seventeen regulars are under contract, including their top three scorers.

But they have just two goalies – Craig Anderson and Malcolm Subban – signed for the 2022-23 season. Subban could be ticketed for the minors after agreeing to a two-way contract Tuesday.

Anderson, 41, battled neck and hip injuries last season, playing 31 games and missing 35 contests. Given his age and recent injury history, the Sabres probably don’t expect him to make more than 30 or 35 appearances.

The Sabres must find a goalie capable of handling the load for a year or two as their youngsters develop. They don’t, however, have a lot of options.

The Sabres can overpay for one – they have an estimated $29,654,166 of salary cap space, according to capfriendly.com – but with so many young goalies in the pipeline, they likely don’t want to award a contract longer than two years.

Other goalies on the market include Thomas Greiss, Martin Jones and Ilya Samsonov.

Samsonov, 25, might be the most intriguing option. The Washington Capitals did not give the Russian a qualifying offer, making him a free agent.

There was a belief in 2015 that if ex-Sabres general manager Tim Murray did not trade the 21st overall pick to the Ottawa Senators in exchange for goalie Robin Lehner, he would’ve drafted Samsonov. The Capitals ending up taking him 22nd.

Samsonov needs to reestablish himself, and joining the Sabres, who might offer him a chance to play 40 or 50 games, would present an opportunity to reignite his career.

Sabres general manager Kevyn Adams, of course, has also explored acquiring a goalie through a trade. But Adams has said he won’t give up assets that might jeopardize the team’s future. He has a plan he refuses to deviate from.

Last week, goalie Matt Murray nixed a trade that would’ve brought him to Buffalo. Instead, the Ottawa Senators on Monday dealt Murray to the Toronto Maple Leafs.

Goalie Cam Talbot, who lost playing time to Marc-Andre Fleury, would’ve been an interesting target for Adams if the Minnesota Wild hadn’t on Tuesday traded him to Ottawa.

Jake Allen and James Reimer, two other veteran goalies, could also be moved this summer.

While Adams has a glaring need in net, he said last week at the NHL Draft in Montreal he won’t “panic.”

If he doesn’t like what’s available, perhaps he will utilize Luukkonen, a restricted free agent, in the NHL instead instead of sending him back to the Rochester Americans.

The Sabres could also re-sign goalie Dustin Tokarski, who established himself as steady backup while playing 29 games last season.

Adams must address other needs. An experienced right-shot defenseman to play beside Owen Power would likely enhance the rookie’s development. They also need to add depth, especially on defense.

The Sabres will probably look for a fourth-line center if they don’t re-sign Cody Eakin, who’s an unrestricted free agent. They also need to find veterans for the Amerks, most notably a goalie.

Tokarski would fill that role well, although after enjoying his first full NHL season, he likely wants a big league gig.

Last year, the Sabres made a slew of minor signings, inking journeymen for around the league minimum. Expect more of the same this summer.