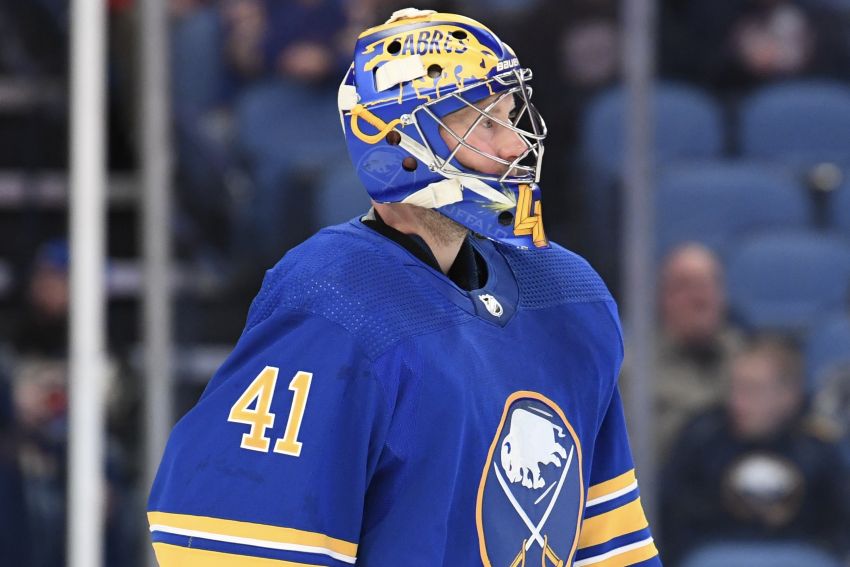 Craig Anderson could be Buffalo’s No. 1 goalie again. ©2022, Micheline Veluvolu

BUFFALO – When veteran goalie Craig Anderson finished his first season with the Sabres, he wanted to take some time to decompress and evaluate his future.

The Sabres felt Anderson’s impact – in addition to stabilizing their net, he established himself as a leader and mentor on the rebuilding club – and sorely wanted him back for another season.

But Anderson, 41, needed to talk to his family and see how his body felt before deciding if he could play his 20th NHL season. The American battled neck and hip injuries last year, missing 35 games.

During his end-of-season media availability, Anderson, who on Thursday signed a one-year, $1.5 million contract to return, sounded like he was strongly considering retirement.

“I don’t think there was ever, in my conversations with him, a sense that he was waffling as much,” Sabres general manager Kevyn Adams said Thursday inside KeyBank Center. “… (He) had to get through a lot of the personal and family things first and then get to having an honest evaluation about, did he feel physically that he could perform at the level that he wants to perform at?

“So I wanted to be respectful of all that and have honest conversations back and forth, which is what we did. I got the call from him just recently that he was ready to move forward.”

Adams said Anderson, whose 308 wins rank 34th on the all-time list, told him “this is as good as he’s felt in a long time.” Anderson is the only goalie the Sabres have under contract for next season.

Anderson, who entered the NHL in 2002-03, is the league’s oldest goalie and was the third-oldest player last season, trailing only Zdeno Chara (45) and Joe Thornton (42).

Right now, it appears Anderson could be their top goalie again. Given his age, it seems unlikely they will run him ragged. But even if he has a lesser role – the Sabres must re-sign or acquire more netminders this offseason – he will almost certainly be an asset.

“I have a lot of respect for Craig – not just the career he’s had but the way he handles himself professionally,” Adams said. “I think he had a big influence in our locker room in terms of being a player that’s done a lot in this league, but also being a player that gets up every day and works to get better and takes care of himself.

“You look at our young team but especially our young D corps, I do think it’s very important to have someone that (provides) some stability in terms of the presence and what he brings. I think he had a big influence on that D corps.”

When the Anderson inked a one-year, $750,000 contract last July, it appeared he might simply be a stopgap signing to help the Sabres get through the year. After spending most of 2020-21 on the Washington Capitals’ taxi squad, the Sabres offered him an opportunity to play regularly again.

But Anderson ended up enjoying what he has called an “amazing” year.

“It says a lot about Craig and his family and also how he feels about the coaching staff, the players, the organization, because I don’t know if this time last year if he thought maybe this could be one year,” Adams said. “I think he had fun and he sees something special building. He actually even said to me, ‘In all my years of playing, I don’t know if I’ve enjoyed myself more than I did last year.’”

Adams said re-signing Anderson “doesn’t change anything in terms of the conversations that we’re having right now and looking at different (goaltending) options.”

“We have to be in on every conversation,” he said. “We have to be open to every possible scenario, which we are. You look at some of the potential trade partners around the league or if you look at some of the goalies that could be on the market, they come at a high price. And maybe right now for us, that’s something we’re going to have conversations about but maybe not quite what we’re comfortable doing.

“They might be looking for a player or a player and a top prospect that we’re not comfortable moving. That doesn’t mean we don’t like the goalie or want to make a move for that particular goalie, but it just means that we’re not willing to compromise or pay the price that might be needed.

Goalie prospect Ukko-Pekka Luukkonen, who played nine NHL games last season, will be a restricted free agent. The Sabres might want the Finn to receive more seasoning in the AHL after enduring an injury-plagued year.

“I really feel strongly that he’s gonna be a very good goalie for us,” said Adams, who likely needs to find a veteran goalie for the Rochester Americans. “He showed when he came up last year that he was composed. He had a presence in net, he was giving us a chance to win hockey games just by being a stabilizing force back there in the NHL games. I liked the way he fought through different things in the American Hockey League last year. … He actually got a presence about him, ‘I’m going to stop the next puck.’ I think that’s a maturation I wanted to see out of him.

“But he’s battled some injuries over a couple years. You’d like to see him have some more games to this point. But we believe in him.”

Veteran goalies Dustin Tokarski, Aaron Dell, Malcolm Subban and Michael Houser, all of whom played for the Sabres last season, will be unrestricted free agents.

Adams said he spent time with Tokarski following the season and he recently spoke to his agent.

“Two years ago, when I go back to before he came up to Buffalo, he was a very positive influence in Rochester when he was there,” he said. “So definitely a conversation we’re still having as we kind of move forward here.”