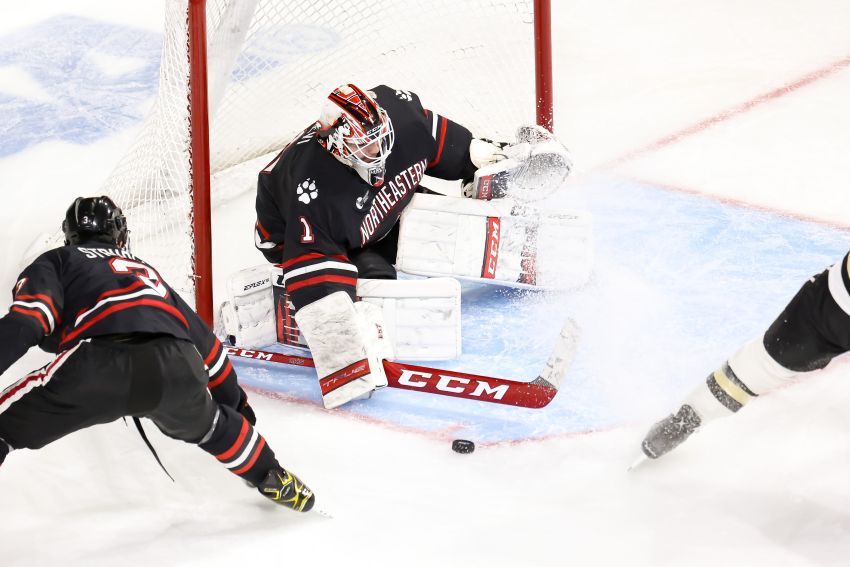 Buffalo Sabres prospect Devon Levi does things his way, embracing a patient approach in his development as a goalie while blocking out any outside noise.

To wit: Levi, the NCAA’s top goaltender last season, chose to return to Northeastern for his junior year instead of turning pro. If he had signed with the Sabres, perhaps he would’ve started for the Rochester Americans or earned a quick taste of the NHL.

But Levi, 20, is perfectly happy returning to the Huskies, the team he backstopped to 21 wins in 2021-22. He feels a sense of unfinished business – “We got a taste of what we could do,” he said – having lost in the first round of the NCAA Tournament. He loves working with his goalie coach, Mike Condon, a former NHL netminder.

“I’m not one to rush my development,” Levi said told the Times Herald by phone last week. “I’ve never really chased the highest level throughout my hockey career. I’ve really just focused more on it doesn’t really matter where you play as long as I’m focusing on getting better every day and on my development.

“I didn’t feel the need to jump levels yet. I think I’ve been developing really well in my future and I want to continue doing so.”

Who’s to argue with Levi’s approach? So far, it has paid off, as he has emerged as a top prospect and perhaps the Sabres’ goalie of the future.

Prior to college, he played Junior A for the Central Canadian Hockey League’s Carleton Place Canadians. Before his Northeastern debut, he led Team Canada to a silver medal at the World Junior Championship in 2021, posting a 0.75 goals-against average and earning the tournament’s top goalie honors.

He did not play for Northeastern in 2020-21 after suffering a rib injury.

The 6-foot, 184-pound Levi said his mentality – doing what he believes is best for his career, even if it’s a bit different – comes from his parents, Eta and Laurent.

“They always taught me to never give up until you’ve done something,” said Levi, whose rights were acquired almost a year ago from the Florida Panthers in the Sam Reinhart trade. “All those cliché lessons, they kind of ingrained them in my head as a kid. It kind of translated into everything I do.

“They also help me a lot with my decision and, ultimately, have helped me make the right decisions throughout my whole hockey career.”

Levi understands outsiders might sometimes disagree with his decisions.

Levi’s journey will be taking him to Buffalo this week for his first NHL development camp, a small milestone in his career.

“It’s … a dream to play in the NHL, and the dev camp’s the first step to that,” said Levi, who visited Buffalo once for a tournament in 2013. “So there’s a first little taste, and I’m really, really excited. I’ve been thinking about it for a long time and looking forward to it. It’s … a new part of my life, a new chapter I’m really excited for.”

Levi clearly feels comfortable being a part of the Sabres organization. He knows forwards Dylan Cozens, Peyton Krebs and Jack Quinn well, having played with them on the World Junior squad. He was teammates with defenseman Owen Power earlier this year on Canada’s Olympic entry at the Beijing Games (Levi did not get into any games).

When the Sabres visited Boston, Levi said he stopped by the locker room and met the coaching staff.

“I know that I’m going to get much better coming out of this week – physically, mentally,” he said.