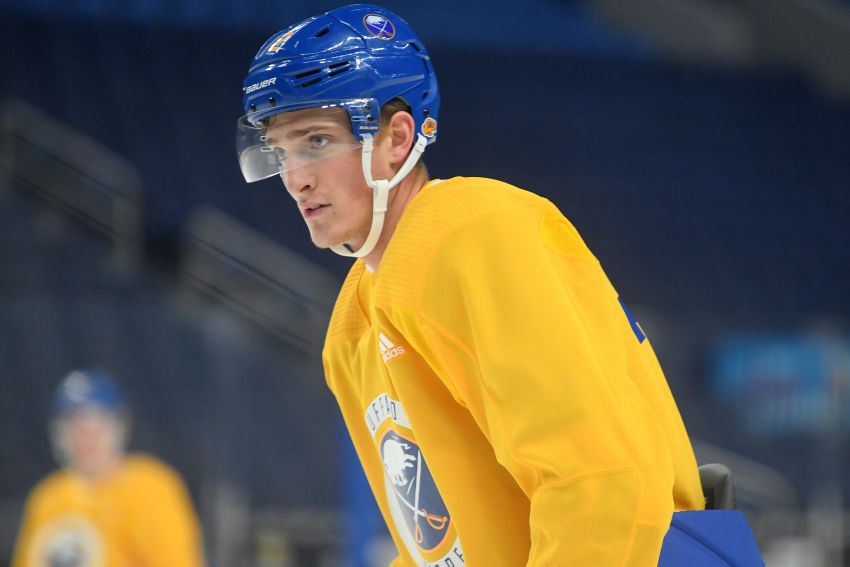 Tage Thompson has earned a spot on Buffalo’s No. 1 line. ©2021, Micheline Veluvolu

BUFFALO – Taylor Hall knew nothing about Tage Thompson before the first day they practiced together as Sabres teammates Jan. 1.

But right away, Hall said he was taken aback by watching the 6-foot-7 winger up close.

The size. The ability to handle and shoot the puck. The speed.

Hall quickly learned why Thompson, 23, is such an intriguing talent.

“You see why he was drafted in the first round and why they’re so high on him here to play at a higher level,” Hall said on a recent Zoom call. “I think he can do it.”

Tonight’s season opener against the Washington Capitals at KeyBank Center will be Thompson’s first game at any level since Nov. 17, 2019. The 425-day wait has been excruciating for the American, who separated his right shoulder in his only NHL appearance last season and underwent surgery a year ago.

But Thompson took advantage of the extra time his rehab and the COVID-19 pandemic offered him. He returned to the Sabres a stronger, more mature player.

“It was kind of a blessing in disguise, that injury,” said Thompson, the 26th overall pick by the St. Louis Blues in 2016.

He established himself as one of the Sabres’ standouts early in training camp and earned a plum promotion to the No. 1 line beside Hall and captain Jack Eichel last week.

“We couldn’t quite guess where he would be after more than a year off and he has truly come in ready to grab a higher role, and he will get that opportunity beginning on Thursday,” Sabres coach Ralph Krueger said. “We have a strong competition within the group and (Tage) has earned the opportunity to play with Jack and Taylor at the moment.”

Thompson, of course, has been expected to morph into a top-line player since the Sabres’ old regime insisted the Blues include him in the Ryan O’Reilly trade.

The Sabres, perhaps to show off what they received in the disastrous deal, kept Thompson in the NHL for nearly all of 2018-19. He struggled for much of his 67-game run, playing short minutes and producing just seven goals. They finally demoted him to the AHL with a few weeks left in the season.

Thompson thrived with the Rochester Americans, performing like a prized prospect over the rest of that campaign and into 2019-20. He scored 14 goals in 27 total appearances with the Amerks. But he lasted just one game after forcing his way back to Buffalo.

“It’s been a long grind,” Thompson said of his rehab. “I think more so mentally than anything else, not playing hockey (for) over a year is obviously tough. Everyone wants to be on the ice and help their team. So having to watch most of last season and this season being delayed it’s been a grind mentally and physically.”

Still, before the pandemic ended the Sabres’ season in mid-March, Thompson remained in Buffalo to rehab and also used the time to get to know his teammates.

“I’m a little more comfortable in the locker room, talking to guys and kind of just speaking my mind,” he said. “It’s allowed me just to relax a little bit on the ice.”

Thompson said he was cleared to skate and “really start working” in June.

“June is really where I started to put the full throttle down and started to gear back up getting toward the season shape,” he said.

“I feel like he’s even more powerful this year,” Sabres winger Victor Olofsson said. “He really uses his size and his strength out there combined with his skill.”

Thompson impressed new general manager Kevyn Adams so much the Sabres awarded him a three-year, $4.2 million contract in October.

“It means a lot,” Thompson said of the deal. “Obviously, it means they got a lot of faith and trust in me to be willing to sign me to three years. I’m excited to be here. I love organization, I love the staff. I just got to do my part now, work and make sure I’m living up to their expectations.”

Thompson’s assignment tonight for his 108th NHL game, a spot at right wing beside Eichel, a burgeoning superstar, and Hall, the 2017-18 NHL MVP, proves he’s starting to live up to those expectations.

In Saturday’s scrimmage, Thompson looked comfortable on the line, scoring on an early feed from Hall before returning the favor.

“He can play with pace, I think he can play with players that have a lot of skill and speed, and really it’s up to him to want to shoot the puck, to want to go to those harder areas,” Hall said. “And as he gets older and kind of figures it out more, he’s got all the potential in the world.”