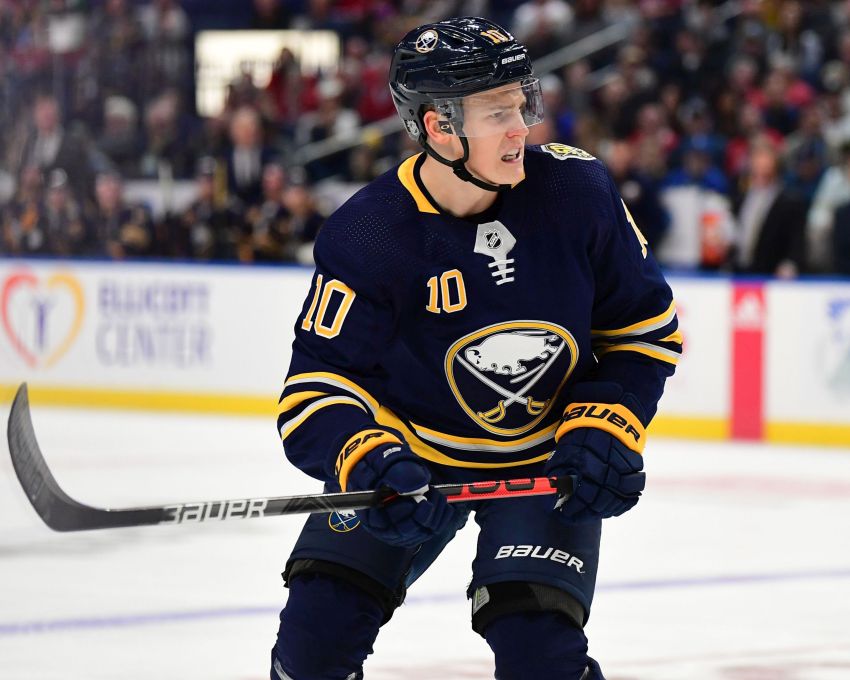 Henri Jokiharju has been playing in key situations. ©2019, Hickling Images

BUFFALO – Ralph Krueger doesn’t pay much attention to his players’ ages. Whether you’re a teenager and or a veteran, the Sabres coach said he treats everyone the same way.

In turn, Krueger expects a rookie to have the same habits as, say, a 35-year-old.

“So for younger players, that could sometimes put pressure on them,” Krueger said prior to Friday’s 3-2 shootout win over the Florida Panthers inside KeyBank Center. “For older players, it also means they need to play like a young player.”

“I feel he’s doing that for every player,” Jokiharju said. “I think it’s a good way of doing it for a coach. I think it’s fair for everyone.”

So far, Jokiharju has been a pleasant surprise for the Sabres, contributing strong minutes on the third pair beside Marco Scandella and killing penalties.

Jokiharju said he didn’t kill penalties last season in the NHL, AHL or while winning gold medals with Finland at the World Junior Championship or the World Championship.

When the Sabres acquired the 6-foot, 195-pound Jokiharju from the Chicago Blackhawks on July 9, it was unclear what role he might fill. Could the Finn stick and earn a spot in the NHL or would he return to the minors?

Then Krueger said a confident Jokiharju arrived at training camp intent on grabbing a job.

“That was important,” he said of the youngster’s confidence. “He came here with a vision on playing in the lineup and not just being a depth player. He’s confirmed (by) adding depth to our defense the way he’s playing.”

Jokiharju’s Corsi For – the percentage of shot attempts by his team while he’s on the ice – was a healthy 57.58 entering Friday, according to NaturalStatTrick.com.

Montour’s injury early in the preseason pushed Jokiharju up the depth chart.

“I haven’t ever seen him as a 20-year-old,” said Krueger, who noted the media usually reminds him of his players’ ages. “I just see him as a player that needs to be playing a certain way within our framework, and that he’s done a really good job of doing that.”

That job, according to Krueger, involves “playing at both sides of the puck.”

“His puck-moving ability has been confirmed, but also the way he attacks and plays on his toes and looks for his gaps early,” he said. “We enjoy that part of his game.”

After Jeremy Colliton took over, Jokiharju’s ice time dropped. Chicago assigned him to the AHL in February.

“He had a tremendous start to the year,” he said of last season.

Meanwhile, winger Alexander Nylander, the prospect the Sabres traded to the Blackhawks for Jokiharju, will likely be a healthy scratch for Saturday’s game against the Winnipeg Jets.

Nylander, 21, started the season on the top line beside center Jonathan Toews and Patrick Kane.

Here’s today’s Behind The Bench w/@BillHoppeNHL. We talk about the #Sabres’ power play success and how the team’s lines have looked one week into the new season. https://t.co/gKHIrQ1JVL