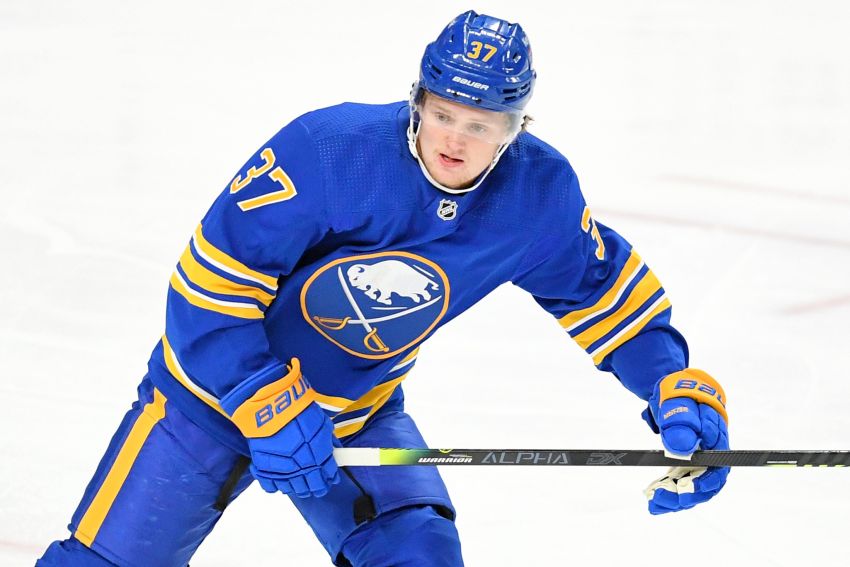 BUFFALO – Having spent the entire game skating on the fourth line, Casey Mittelstadt hardly seemed like a forward Sabres coach Ralph Krueger would utilize in the waning seconds of a one-goal game.

Mittelstadt, 22, was only making his second appearance this season in Sunday afternoon’s 5-3 loss to the New Jersey Devils. The Sabres had just elevated him from the taxi squad earlier in the day.

Krueger had two former 40-goal scorers – Jeff Skinner and Eric Staal – on the bench. Still, Krueger liked what Mittelstadt had showcased in his limited role as a winger. He also offered the Sabres some freshness, having not played the previous day.

So Krueger made what he called a “gut decision” and put Mittelstadt on the ice in a six-on-five situation with the Sabres pressing for the tying goal.

“I was happy to be out there,” Mittelstadt said on a Zoom call following Monday’s practice. “I was comfortable out there. I’ve been in plenty of those situations in my life.”

Mittelstadt, however, hadn’t experienced any situations like that this year. He has mostly served as an extra forward, shuttling between the taxi squad and the active roster.

The American has tried to tap into the knowledge of Matt Ellis, who runs the taxi-squad sessions, and study the action when he watches games.

“Getting to see the game and kind of seeing the time and space you have in certain areas and different things … has helped me in my first couple games,” Mittelstadt said.

While Mittelstadt’s play has earned Krueger’s praise – “He is on the verge here, and we’re excited to see what’s happening with him,” he said – opportunities have been limited.

If winger Sam Reinhart can return from his upper-body injury for tonight’s road game against the New York Islanders, Mittelstadt will likely play down the lineup or be scratched. He practiced at left wing beside top center Jack Eichel and Victor Olofsson on Monday inside KeyBank Center.

“We’re looking forward here in the next few games, if it’s not (tonight), somewhere very near getting him another look so we can feel that development a little more firsthand,” Krueger said.

Mittelstadt’s career has been well documented and scrutinized. He jumped to the NHL late in the 2017-18 season following his freshman campaign at Minnesota and enjoyed regular duty for more than a year.

The Sabres, having limited options at center, kept playing Mittelstadt despite some struggles. Then before Christmas last season, they demoted him after he morphed into a regular scratch. He spent the rest of the season with the Rochester Americans.

Those early hiccups helped fuel the 6-foot-1, 196-pound Mittelstadt, whose maturation over the past year has impressed the team’s brass. He used the long offseason to his advantage, returning to Buffalo stronger, faster and more confident.

“I got some extra time to work on that this year,” said Mittelstadt, who recorded an assist and skated on the power play in his season debut Jan. 24. “I think it was a good summer for me. Obviously, I’m a young guy, I’ve got some growing up to do. It was good to take the time to take a deep breath and look back on some things I would like to fix and some things I’d like to have back.”

Krueger said Mittelstadt has become lighter on his feet without sacrificing his skill set.

“He is definitely a future offensive threat, a power-play player, a playmaker with a scoring ability,” Krueger said. “(It was important) for him to increase his foot speed and give himself more separation on the rush to be able to make those plays that he can make so well. We thought that was lacking last season and it’s good to see somebody has worked on that in the offseason.”

“He seems to know the play that he’s going to make before he gets the puck,” Okposo said, “and when he gets it, he’s really confident with it.”

He added: “He definitely seems to have taken some steps.”