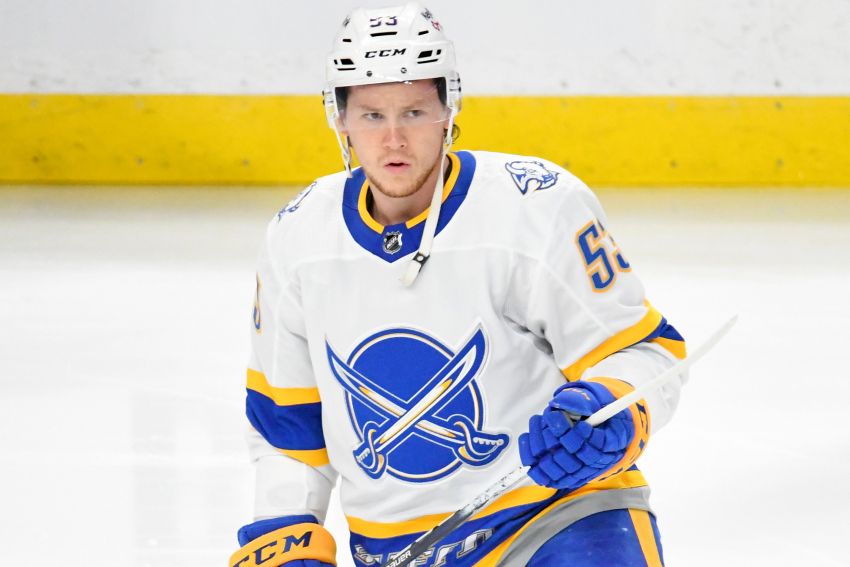 As their three-game set against the New York Islanders mercifully neared its end Sunday afternoon, the hapless Buffalo Sabres finally started displaying some signs of life.

After falling behind 3-0, winger Jeff Skinner’s first goal since Feb. 29, 2020 jumpstarted the Sabres 5:41 into the third period. Defenseman Colin Miller’s goal at 9:35 moved them within one.

Suddenly, the Sabres were pushing for the tying score inside Nassau Coliseum. And then a sequence that sums up their awful season transpired.

Defenseman Brandon Davidson couldn’t coral a bouncing puck inside his own blue line and turned it over to Cal Clutterbuck. As Clutterbuck zoomed to the net, Davidson stumbled and fell down, paving an unfettered path to goalie Jonas Johansson.

Clutterbuck scored at 12:57, securing the game. Brock Nelson added an empty-netter, his second goal of the afternoon.

The Sabres’ 5-2 loss was their seventh consecutive defeat. Incredibly, they lost three straight games on Long Island by that score.

If you’ve lost count, the Sabres have dropped 11 of their 13 outings since their COVID-19 pause ended.

“It’s not a fun time,” Sabres coach Ralph Krueger said on Zoom call, acknowledging the obvious. “These aren’t easy times but truly they are times where you could grow and learn if you take the right lessons out of it. We need to find lessons right now and really evaluate everything that’s within our control as coaches and work together with the players to pull ourselves together.

“The only way we’re going to get out of this is with a group effort.”

The Sabres close their five-game road trip Tuesday against the Philadelphia Flyers. Will Krueger still be their coach?

General manager Kevyn Adams clearly doesn’t want to fire Krueger. On Friday, Adams said everything, including Krueger, was being evaluated. Still, Adams sounded like axing him would be his last resort.

“We always seem to keep it more simple off the start and that seems to gain us a lot of momentum,” Miller said.

Early in the second period, struggling Sabres winger Taylor Hall fell down as he approached the opposing blue line on a breakaway, a play that symbolizes his disappointing season. A gassed Hall, who has scored just two goals this season, spent most of his 95-second shift chasing the Islanders around his own zone.

Minutes later, Anders Lee scored at 5:13, his sixth goal in six games against the Sabres this season. Then Nelson scored at 6:15.

The Sabres, as they often do, collapsed when they faced a little adversity and committed a slew of mistakes.

“We just blew up in three individual coverage situations that created a deep, deep hole,” Krueger said. “Yeah, it was extremely disappointing that. The psychology and execution of it is something that we have to continue to address.

“There was at least a reaction in the third today, but in the end, we needed a result and we didn’t get it.”

Skinner, a healthy scratch three times last month, scored after skating out from behind the net and slickly roofing a backhander by Islanders goalie Iyla Sorotkin.

“I sort of take myself as someone that should be able to contribute offensively and obviously that’s been a bit of a struggle personally and as a team,” said Skinner, who finally scored in his 20th game this season.

Skinner looked very relieved following his 259th NHL goal and was smiling on the bench.

“That’s certainly something for Jeff Skinner, who’s measured his whole career on goals,” Krueger said. “Getting that zero out of the way is an encouraging sign moving forward. We need to get the goal scorers confident. We need them to be able to execute to get us leads, to be able to neutralize goals against quickly. …

“I’m happy for Jeff that he got that out of the way and now I’m happy he can build on that.”

Skinner’s goal ignited him, and not long after that, he nearly scored again, slickly cutting across the slot before Sorotkin’s blocker save stymied his attempt.

One thought on “Jeff Skinner finally scores, but Sabres lose seventh straight: ‘Not a fun time’”