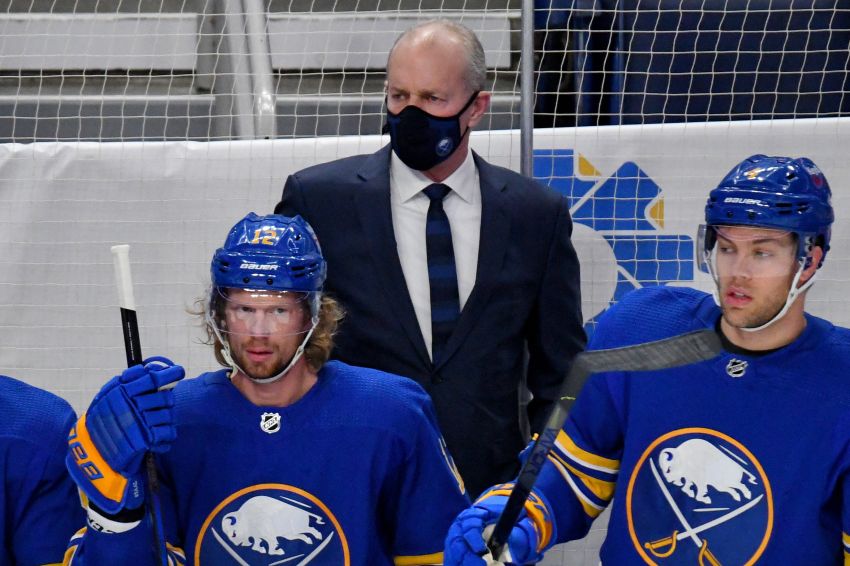 Ralph Krueger’s team has fallen to the bottom of the NHL. ©2021, Micheline Veluvolu

But given the Sabres’ recent futility and fragileness, it felt like they would implode following any misstep against the New York Islanders. Sure enough, after Mathew Barzal’s between-the-legs goal tied the game 3:51 into the second period, they fell apart.

Barzal’s dynamic effort ignited the Islanders, and they scored two more goals by the 8:54 mark. Before the game was halfway over, the Sabres trailed 3-1 and looked finished.

The Sabres’ 5-2 loss was their 10 setback in 12 games since their COVID-19 pause ended. They’ve morphed into the NHL’s most hapless team over a pathetic three-week stretch. Remember, they started the season a solid 4-3-2.

Why do they buckle when they face the slightest bit of adversity?

“It’s just mental toughness at the moment,” Sabres coach Ralph Krueger said on a Zoom call. “I mean, the National Hockey League this year is not a league of people running each other over and without the fans in the building, the physicality is definitely in a different place than it would usually be.

The Sabres face the Islanders, a team they’re 0-5 against this season, again this afternoon at Nassau Coliseum. The Islanders, who also beat the Sabres 5-2 on Thursday, have outscored them 19-7 this season.

After today’s contest, the Sabres close their five-game road trip Tuesday against the Philadelphia Flyers before coming home Thursday to face the Pittsburgh Penguins.

The Sabres’ schedule against East Division opponents is relentless and perhaps the toughest they’ve had in their history. They haven’t played the Penguins or Boston Bruins yet this season, so they have 16 total meetings against those heavyweights over the final two months.

It’s fair to wonder when the Sabres will ever win another game.

Krueger might need to victory today or Tuesday to save his job. Sabres general manager Kevyn Adams said Friday that Krueger is being evaluated.

Defenseman Brandon Montour, who assisted on Bryson’s goal, said the coaches are “doing a good job” trying to help the Sabres snap out of their funk.

“Everybody is trying to figure out a way out of this,” he said. “You change things up, you switch lines. It’s just a matter of guys in the group trying to bear down to change this. We’ve had this system, all the things he’s trying to do to kind of help us get to the next level and obviously nobody likes to lose.

“Everybody is struggling. You can pinpoint it on one guy or whatever, but it’s a full group here – players, coaching staff, everyone. As players, we have to figure it out here.”

The Sabres, who have started some games dreadfully, finally played a strong first period.

“We just had a lot of really good movement,” Krueger said. “I thought our puck management was excellent, we deserted it early in the second, after the first goal against. That was disappointing. We got complicated with the puck. I thought we were moving it quick, we were in on them and we were getting underneath them in the O-zone and it created opportunity.

“Disappointingly, we have a five- six-minute stretch that cost us the game. We gave up on the things that were working, and it is puzzling. We need to look at that puzzle and try to fix it.”

Barzal’s goal will be a staple of highlight reels for a long time. He beat Sabres defenseman Rasmus Ristolainen to the puck in the right circle and cut to the net before utilizing a between-the-legs shot to score on goalie Carter Hutton.

Bryson said he had been waiting to score his first NHL goal “for a long time.”

Saturday’s loss, however, was only his sixth appearance. In one of his first NHL shifts Feb. 23, the rookie swiftly joined the rush and clanked the puck off the post.

Bryson’s shot from above the left circle early in Saturday’s contest hit the post before getting by Islanders goalie Semyon Varlamov.

“It was so exciting,” Bryson said.

“Monty made a good play keeping the puck on the blue line and then he passed it over,” Bryson said. “Cozens had a good screen in front of the net and I kind of threw it there and found the top corner on the right side. It was a great feeling, especially 30 seconds into the game. That’s how you want to start games.”