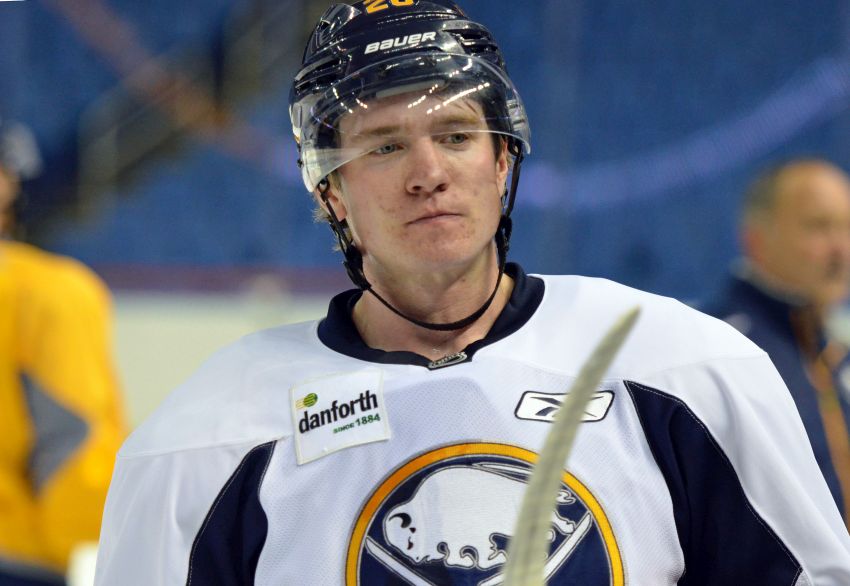 But less than 10 years ago, Dalpe was a 5-foot-5, 110-pound teenager so desperate to get drafted into the Ontario Hockey League he hatched a plan at a weigh-in.

“I put these rocks in my pocket, and I weighed in at like 114,” Dalpe recalled Saturday inside the First Niagara Center. “I thought I was the biggest guy ever.”

Teams, which were drafting players almost 200 pounds, passed on him.

A large growth spurt helped Dalpe morph into a strong prospect. He debuted in the NHL with Carolina four years ago. Still, he wasn’t able to stick until last season, when he played 55 games with Vancouver.

“I’ve always been a guy that has taken the hard way, and not on purpose,” Dalpe said.

Dalpe chose a hard lineup to crack when he signed a one-year, two-way contract with the Sabres on July 13. Only three or so forward jobs are available this training camp. The Sabres have strong depth up front. A few players will be squeezed out before the Oct. 9 season opener.

“I think it’s going to come down to the wire,” said Dalpe, who has nine goals and 17 points in 97 NHL games.

“I’ve gone through the scenarios, and there’s a lot of them,” Ellis said.

Here’s a closer look at the competition:

Dalpe played center and wing in two preseason appearances. He’s transitioned from a college and AHL scorer into a third- or fourth-line NHL checker.

“I … can play both ends of the rink, and I like to skate,” said Dalpe, who had a personal day Friday.

“The one thing I see about him is he’s a very determined kid with a tremendous amount of speed,” Nolan said.

Deslauriers, meanwhile, must clear waivers this season, so the youngster’s likely staying put. Flynn appears to have earned a spot based on his versatility and Nolan’s praise.

“You can never go wrong with having a guy like Brian Flynn on your team,” Nolan said. “He gives you everything he has to give. Some days he’s a limited fourth-line guy, never complains. He does the same thing whether you have him 40 minutes or four minutes.”

That leaves one spot.

Grigorenko, who’s enjoying a nice camp, and Larsson can be assigned to Rochester. Reinhart, the No. 2 pick in June, can be sent back to junior. The 18-year-old would likely be the Sabres’ third-line center if he sticks.

Versatility should help some candidates. Ellis, Flynn, Grigorenko, Larsson and Mitchell can also skate at center or wing.

“When you put something in front of people to say that there’s some jobs for grabs, you got to work, you got to compete for them, Torrey’s one of those guys that took it literally,” Nolan said. “He’s working. He wants one of those jobs.”

Mitchell has 36 goals in 392 NHL games. He understands how he must play.

“I’m not the highest-end skill player, so focusing on all those little details are important for my game,” he said. “It’s always been that way, little details.”

Little details and hard work have helped Ellis stick with the Sabres most of the last seven seasons. Nolan brought his name up recently, so he’s clearly on his radar. Ellis played the final 50 games last season.

“I tried to build a bit of rapport with the things that I do that I bring day in and day out, whether it’s on the ice or some of my leadership capabilities off the ice as well,” Ellis said.

Before the Sabres’ old regime banished him to Rochester last season, Kaleta, a supreme agitator, was a regular for five years. The Sabres planned to recall him shortly after Nolan took over, but he tore his ACL on Nov. 29.

Nolan might want to give Kaleta, who’s back playing, a regular-season look.

Of course, the Sabres could keep one or two extra forwards. Whatever happens, some veterans could be on waivers soon. There’s a tough fight ahead.

“Things never came easy to me,” Dalpe said. “I don’t expect them to now.”