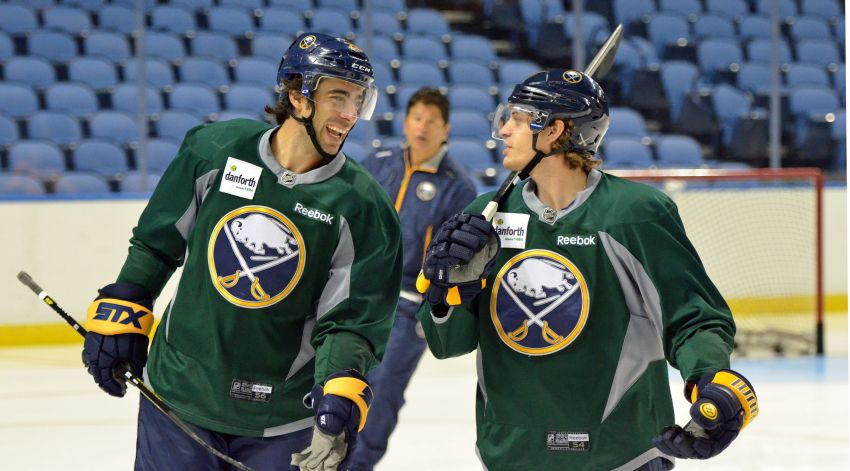 BUFFALO – Through all the losses last season, through all the stress and uncertainty, Matt Moulson kept envisioning the future here.

The high-scoring winger endured the toughest season of his career in 2013-14, skating for three teams during a dizzying six-month stretch. The Sabres lost 28 of the 44 games he played. They changed coaches and general managers. Days before they traded him to the Minnesota Wild, Pat LaFontaine resigned as president of hockey operations.

Still, Moulson saw a bright vision from ownership and management. He loved playing for coach Ted Nolan. He enjoyed the community feel of living in Buffalo.

So when Moulson became a free agent, he signed a five-year, $25 million deal to return July 1, the same day the Sabres brought in respected veterans Brian Gionta, Josh Gorges and Cody McCormick.

“I knew if I got the chance again, it’s something I definitely wanted to do,” Moulson said Saturday inside the First Niagara Center.

“I think you can take a lot of pride when you’re settled in in your city,” he said. “I think that’s the case with us in Buffalo. I think we really feel a part of the community.”

Nolan’s presence was a big factor in luring Moulson back. In just a few months, the two connected on levels beyond hockey.

“We have a lot of the same values,” Moulson said.

Moulson identifies with Nolan’s straightforward, everything-must-be-earned approach. The Pittsburgh Penguins drafted Moulson in the ninth round in 2003 but never signed him. He finally became an NHL regular when he was 25 years old.

The Cornell graduate paid a lot of dues.

“I was always taught to earn everything,” Moulson said. “Nothing was ever given to me. I think that’s kind of the philosophy he has. He’s a very honest person. He’ll tell you straight up what’s going on. If you’re not playing well enough, he’s going to let you know.

“I think that’s all you can ask for from someone, to be honest with you and no beating around the bush. He’s a great motivator. He knows a lot about hockey and a lot about people.”

Nolan said he couldn’t handle his relationship with Moulson differently because he’s a regular 30-goal scorer.

But while the two talked about their love of lacrosse and some other interests, Nolan had no idea Moulson would be returning.

“We just talked, and all of a sudden for him to have that response wanting to come back here, it was great for us,” he said. “You build teams through people. Skill is one thing. The people that you have and the people that you work with, that’s how you win championships. Matty’s one of the finest gentlemen I’ve met.”

Moulson’s arguably Nolan’s finest hockey player. Since the start of 2009-10, he has 135 goals, the 13th-most in the NHL during that span, according to hockeyreference.com.

He skated on the left wing beside Tyler Ennis and Drew Stafford during the first two sessions of training camp. The combination, which had some success last season, could be a legitimate No. 1 line.

“I think we’re all excited as a unit,” Ennis said. “It’s only been a couple days, but we’re really confident in each other, making a lot of good plays.”

After arriving from the New York Islanders on Oct. 27, Moulson played decently, compiling 11 goals and 29 points. But the season “was pretty stressful on the mind.”

He wasn’t expecting to leave Long Island, his home since 2009. His wife, Alicia, had just given birth to their second child. With free agency looming, he knew the Sabres would likely be dealing him.

“I think that was the toughest part, just not knowing where you’re going to be, what your family’s going to do,” Moulson said. “It’s easy when it’s yourself or you and your wife.”

The Sabres traded Moulson and McCormick to the Wild hours before the March 5 trade deadline. Moulson and his family lived in a hotel for the next few months.

“My wife was a big help,” Moulson said. “She’s kind of my rock at home. Luckily, we had her. She helped the whole family get through it. We met a lot of great people on the way, especially in Buffalo.”

He played 30 total games with Minnesota, including 10 playoff contests.

“It makes you pretty hungry to get back there and get that Cup,” Moulson said about the postseason.

That Stanley Cup could be in Buffalo.

“I think this team is destined for great things,” Moulson said.

The Sabres open the preseason at 5 p.m. today in Washington against the Capitals.

Nolan plans to dress slick center Sam Reinhart, the No. 2 pick in June. He hasn’t named a starting goalie.

Nolan said he has a “ghost lineup” for all six exhibition games. Veterans will mostly play the last two or three.

“Early we’ll see some guys that are going to be really battling for jobs,” Nolan said.