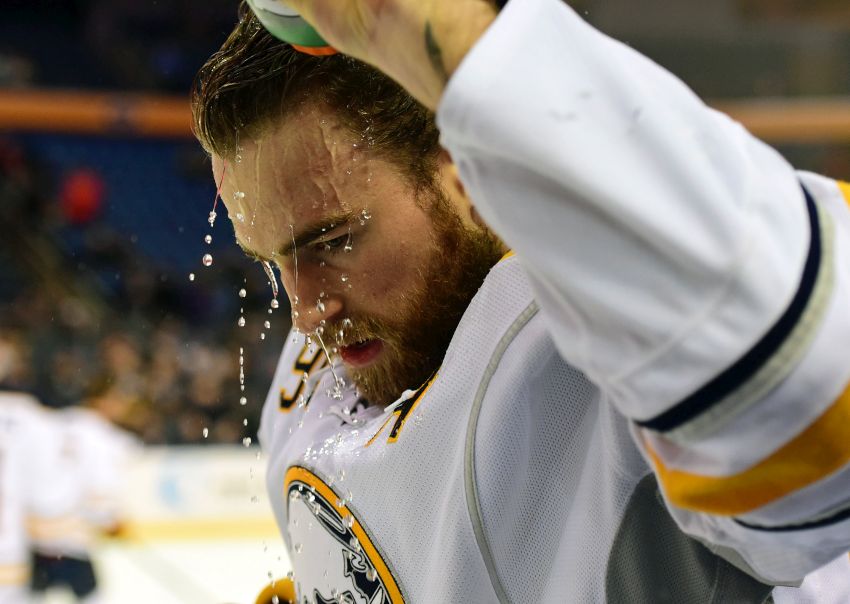 BUFFALO – Dan Bylsma has a problem. It’s a good one, mind you. Most coaches would love to have it.

In Sabres center Ryan O’Reilly, he possesses one of the NHL’s most talented and versatile forwards, one he can throw on the ice in every conceivable situation.

A season ago, O’Reilly’s first with the Sabres, he skated 21 minutes, 44 seconds a game, most among NHL forwards. He deserved every second, quickly becoming the team’s heart and soul and MVP.

Now, O’Reilly’s back with the Sabres. He plans to practice for the time this morning and play in the final two exhibition games Wednesday and Friday.

“Our team got smarter, it got better, it got harder working,” Bylsma said Monday inside KeyBank Center. “Coaches got better today. When Ryan comes back, he’s that type of player.”

O’Reilly’s role at the World Cup was vastly different than his regular one as the Sabres’ No. 1 center. As Canada’s fourth-line center, he skated short minutes and wasn’t a go-to guy.

“I’m ready to get back with the boys,” O’Reilly said. “I carry a little bit more responsibility (in the NHL). I’m excited for that, that kind of pressure, being used in every situation.”

But can Bylsma award O’Reilly, 25, that hefty ice time again this season?

Bylsma wants O’Reilly, whose tireless practice habits have already rubbed off on teammates, to give less this season.

While O’Reilly scored 21 goals and a team-high 60 points, he also endured a 24-game goal drought midseason. Playing so much defense “takes away where he could be offensively,” Bylsma said.

“That’s a balance, because we’re still going to depend on Ryan to take draws and penalty kill because he’s good at it,” Bylsma said. “But I’d like to see him come down in his minutes so that he’s not – I don’t want to say tired out – spending all his energy on the defensive side of the puck, has some leftover for the offensive game.”

Bylsma believes the Sabres now have enough talent they could rely less on O’Reilly. If he receives fewer minutes, then perhaps his consistency, his biggest focus, will improve.

“There’s a ton of situations I look at and areas I kind of slumped or areas I wasn’t performing like I wanted to,” O’Reilly said. “By no means was I satisfied with last season, personally or with the team. I think we could have done a lot better.”

Like his teammates, O’Reilly thinks the playoffs are within grasp.

O’Reilly just left the best collection of hockey talent in the world.

After Canada announced its final World Cup roster in late May, O’Reilly was told to be ready in case of an injury. General manager Doug Armstrong called O’Reilly early last month and told him to be by his phone. Sure enough, when Tyler Seguin was diagnosed with a heel fracture, Armstrong offered him a spot.

An excited O’Reilly spent the tournament between Joe Thornton and Matt Duchesne.

Yes, that was really Canada’s fourth line. He said playing with Thornton, one of his heroes he tried to emulate growing up, was “crazy.”

The World Cup was clearly a special experience for O’Reilly.

“It was amazing … some of the fastest hockey I ever played,” he said. “The team we had, a few of the guys I’ve played with before, but a lot of guys I haven’t. The depth of Canada, seeing all these guys, getting to play with them, seeing every little thing they do (was special).

“For us to win, starting off the season that way, I’ll start with some confidence coming in.

The Sabres play against the Carolina Hurricanes tonight in Marquette, Mich. Lakeview Arena, a 3,100-seat rink, won the Kraft Hockeyville competition, earning $150,000 in arena upgrades and an NHL preseason game.

Bylsma, a Michigan native, said he played in the rink twice growing up.

Winger Kyle Okposo left practice Monday after taking a shot on the side of the leg near the knee. The newcomer has “got quite a big bruise” and is questionable for the next two games, Bylsma said.