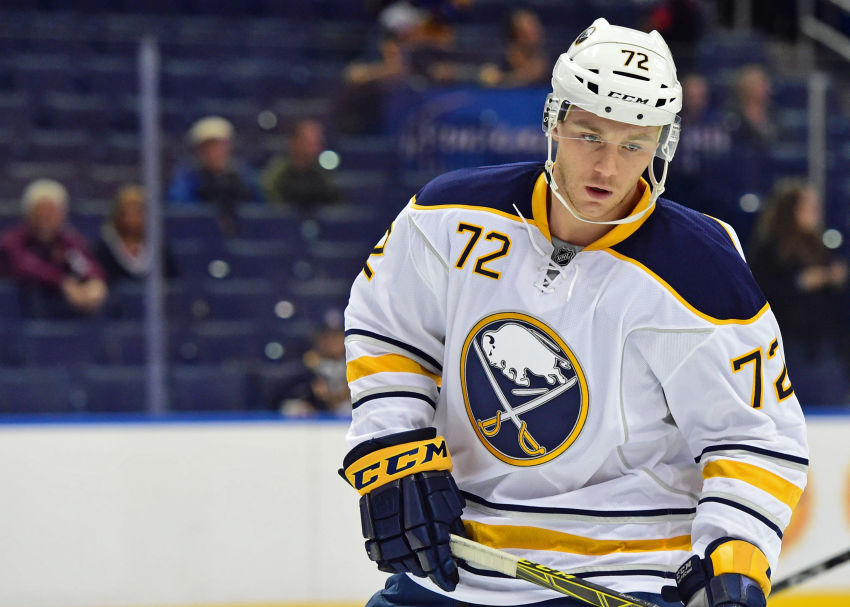 While the prospects have contributed to the Americans at times, another first-year pro has outplayed them all. Remember this name: Jean Dupuy.

Who? Just 23 games into his career, Dupuy, an undrafted center from the Ontario Hockey League’s Sault Ste. Marie Greyhounds, looks like he could have a future in the NHL as a third- or fourth-liner.

“He’s mature beyond a rookie,” Amerks forward Matt Ellis, Dupuy’s linemate, said Wednesday inside the Blue Cross War Memorial. “That’s one thing that kind of sets him apart. He has a level of maturity to his play. It doesn’t seem like he’s a first-year player. He plays in big situations. He’s going to be an exciting one to watch.”

The 6-foot-2, 207-pound Dupuy, 21, has quickly acclimated to the AHL, showcasing a mix of toughness and slick offensive skills.

“His game is gritty and he’s not afraid of traffic in any way,” Amerks coach Randy Cunneyworth said. “That’s the key, he’s not shy. He’ll go through anything, he’ll shoot the puck. His game is one that’s playing at both ends.”

Dupuy zoomed through three zones and by two defenders Nov. 25, scoring a nifty three-on-three overtime winner in the Amerks’ 4-3 win against Syracuse. The highlight-reel end-to-end goal earned Dupuy the No. 4 spot on SportsCenter’s Top 10 plays.

“It was pretty cool,” Dupuy said. “Everybody was texting me.”

Dupuy already has eight assists, the Amerks’ third-highest total, and 10 points, fourth on the team. He sent some early notice he possessed offensive skill, recording three assists opening night. His plus-6 rating is the team’s highest.

“He does the right things with the puck,” Ellis said. “He goes to the right areas. I think the one thing that’s surprised a lot of people is … the prettier goals, the prettier plays that he’s made. He’s not just a crash-and-bang guy. He’s got that other element, kind of sets him apart.

“He’s a big body that has hands. When you find that, that’s usually something special. Teams go looking for guys like that.”

But teams weren’t looking for Dupuy a few years ago. He went undrafted. An invite to Winnipeg’s training camp last year didn’t earn him a contract, so he went back to the OHL for his overage season.

Dupuy thrived with more responsibility, compiling a career-high 18 goals and 46 points in 54 games. The Sabres signed him to a three-year, entry-level deal in late November 2014. Bailey joined him about halfway through the season, and the two skated as linemates as the Greyhounds won two playoff series.

“It’s just led me into this year with a good attitude, clearly more confidence and a chance to play pro hockey,” Dupuy said about last season.

“You keep doing things the right way every day, become a pro and let your play do the talking,” Ellis said. “I think he’s done a great job very early in the season here.”

The Sabres, who host the Los Angeles Kings tonight at the First Niagara Center, had Friday off as they flew back from Calgary, where they lost 4-3 to the Flames in a wild affair Thursday.

Sabres defenseman Rasmus Ristolainen, 21, became the talk of the NHL after scoring three goals in a span of 11:48 in the third period.

– It was the first by a Sabres defenseman since Phil Housley on Jan. 22, 1988 against New Jersey.

– It was the first hat trick by an NHL defenseman in a regulation loss since Edmonton’s Marc-Andre Bergeron on Jan. 14. 2006, according to statistician Eric Hornick.

– Ristolainen was the youngest NHL defenseman to score a hat trick since the Sabres’ Hannu Virta on March 19, 1983, according to Elias.

– Jim Schoenfeld and John Van Boxmeer are the other Buffalo defensemen with hat tricks. Housley also had another one.

“I don’t know,” he told reporters in Calgary. “Maybe when I was 10 or something. I played forward. I don’t remember. Maybe never.”

Notes: Former Sabres goalie Jhonas Enroth is expected to start for the Kings. … The Sabres have lost three straight contests and 10 of the last 13 (3-7-3).