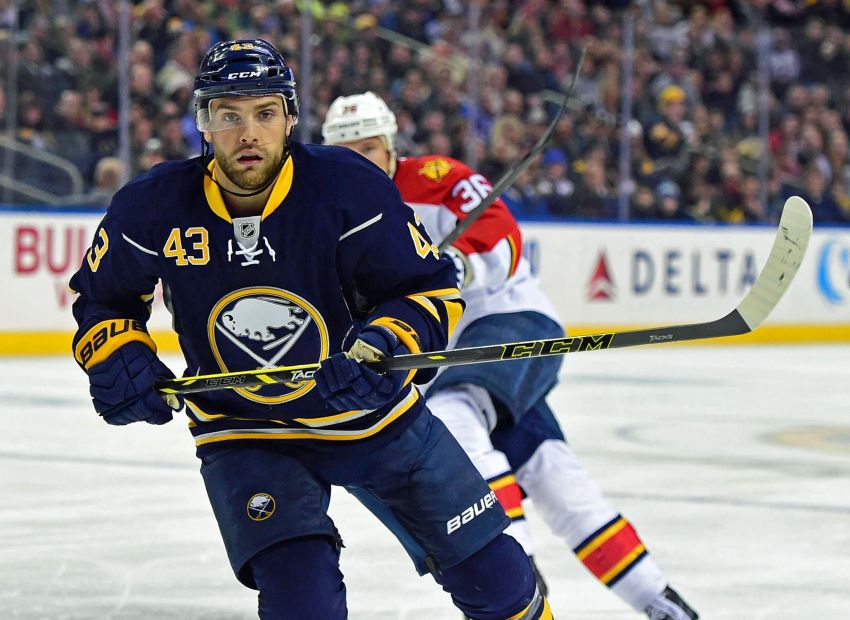 Flyers defenseman Radko Gudas, who has a reputation for questionable hits and has been suspended by the NHL once, won’t have a disciplinary hearing, according to the Cherry Hilly Courier Post’s Dave Isaac. Meanwhile, Catenacci will miss tonight’s contest against the Montreal Canadiens.

“Gudas steps up into that hit without any other possibility than to hit his head first,” Bylsma said inside the First Niagara Center. “That’s the way I saw it in my mind’s eye last night.”

The Sabres, of course, are livid with Gudas. Defenseman Jake McCabe, who immediately fought Gudas, had instigator penalty rescinded by the league, he said, meaning his automatic one-game suspension has been voided.

Sabres winger Marcus Foligno, who fought Gudas earlier in the game after a hit, said he was “disappointed” the Czech won’t face any discipline.

With Catenacci out, the Sabres, losers of four straight contests, will recall a forward from the AHL before the game, Bylsma said. Winger Zemgus Girgensons and center Johan Larsson are still out.

Update: The Sabres have summoned forward Phil Varone from the Rochester Americans. Varone, 25, had one goal in four NHL games earlier this season. To create a roster spot, the Sabres placed Catenacci on injured reserve.

“It’s extra special it’s in my hometown,” Bailey said. “I got a ton of family, friends coming tonight.”

“I would love to see him duplicate exactly how he played last night,” Bylsma said. “I know your first game’s a pretty big moment. There’s usually a lot of nerves going through you when you have that first game. … I’m sure he’ll have that same feeling when he steps out on the ice tonight.”

In other lineup news, defenseman Carlo Colaiacovo will play his first contest tonight since Jan. 5. Incredibly, it will be only his second appearance since Dec. 7. Colaiacovo patiently waited for his opportunity.

Defensemen Mark Pysyk and Mike Weber will likely be scratched. Pysyk hasn’t been a healthy scratch this season.

Goalie Chad Johnson will start for the Sabres tonight, his 32nd appearance.