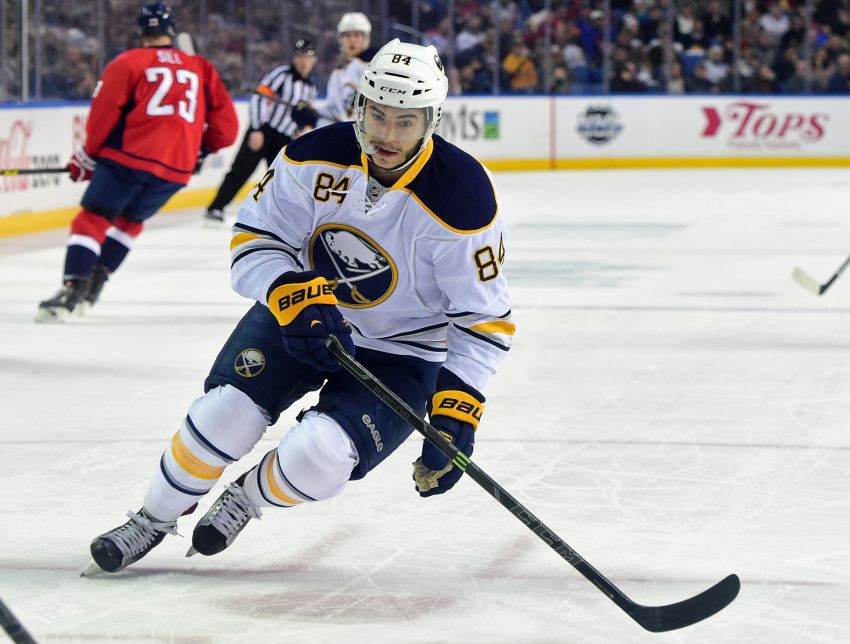 BUFFALO – Just 18 days ago, when the Rochester Americans made their yearly visit to the First Niagara Center, Phil Varone watched as a healthy scratch. At that point, almost halfway through his fifth professional season, the forward appeared to be on the outs with the Sabres organization.

Despite playing 28 NHL games last year and earning a contract worth $200,000 in the minors, Varone’s poor play and the Amerks’ glut of veterans helped him get benched five times recently.

But Varone, the Amerks’ leading goal scorer with 10, has recently been the struggling AHL club’s best forward. With winger Zemgus Girgensons day-to-day with an upper-body injury, the Sabres recalled Varone on Saturday prior to their 4-1 win over the Washington Capitals.

Varone rewarded the Sabres 10:30 into the first period, scoring his fifth NHL goal by converting Rasmus Ristolainen’s rebound beside the net.

“It’s huge,” Varone said about scoring. “This year hasn’t gone the way I expected. You start listening to some of the things people say. Sometimes it creeps into your head. I think today, this game, puts me in a better frame of that I can play in this league and contribute.”

Bylsma said he wanted to utilize Varone’s “skill and ability with the puck,” so he mostly skated him on the right wing beside center Jack Eichel and Jamie McGinn.

Varone, 25, had three goals and five points with the Sabres last season, but he only registered one assist in his final 17 appearances.

“I think I proved to myself last year the first 10 games here that I can make things happen,” Varone said. “I think I kind of hit a rut toward the end of the season when I was here. I think I can make plays.”

Still, the Sabres thought enough of Varone, the Amerks’ leading scorer last season, to reward him with a nice contract. This season has been up and down. Bylsma only gave him a short look during training camp. Varone also has 19 points in 33 games and a team-worst minus-20 rating.

Varone, however, has performed much better recently. He tied his career high with four points Jan. 8.

His new status as an AHL veteran has hurt him. According to league rules, teams can only dress six players with 260 or more games of professional experience. The Amerks have eight, meaning some established, high-priced talent has been sitting regularly.

“It’s definitely different,” Varone said. “It’s my first time going around being a vet. It’s tough for all of us. It’s tough for Matt Ellis, Patrick Kaleta, Jason Akeson. That’s the cards we were dealt, and we have to deal with it. We’re professionals.”

Josh Gorges’ upper-body injury created a spot for Pysyk. Bylsma said Gorges is day-to-day and will accompany the Sabres on their two-game road trip, which starts Monday in Arizona. Girgensons won’t travel.

With Gorges out, Zach Bogosian skated beside Ristolainen on the No. 1 pairing.

Sabres goalie Chad Johnson played his 27th game Saturday. With starter Robin Lehner back from a high ankle sprain, Johnson, 29, could take a backseat now. His days in Buffalo might be ending soon, however.

Johnson, an unrestricted free agent following the season, has been playing well enough a contender might consider adding him for the stretch run prior to the trade deadline.

Naturally, Johnson, who has already played for five NHL teams, has thought about his future.

“Always,” he said. “It’s hard not to think about next year being (a) contract year. What’s going to happen? I love the group here. … The guys have told me they like when I’m playing and (are) comfortable with me and how I handle the puck, how I’m playing and competing and making saves. …

“You don’t know the business side of it, so it’s always difficult, you know? I love the city, I love everything about it here. It’s part of the game. I’ve been through it a lot in my career.”

Rudy Migay, the Sabres’ head scout in the 1980s and 1990s, has died. He was 87. Migay also played 418 NHL games with the Toronto Maple Leafs. The Sabres held a moment of silence for Migay prior to the game.