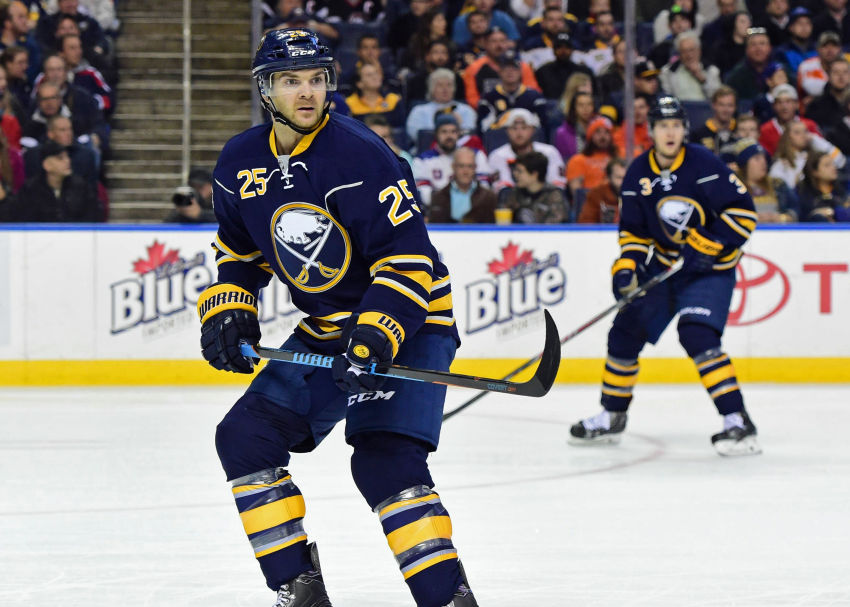 BUFFALO – Having endured a string of injuries in his 20s that almost derailed his career, Sabres defenseman Carlo Colaiacovo understands what it’s like to nearly lose something you love so dearly.

That’s one reason why the affable veteran, who’s on his fourth team in four seasons and nearly went to Russia last year before an opportunity materialized in Philadelphia, is cherishing his time with the Sabres.

“To have been in the league for so long and to have been through a lot of what I’ve been through, seen what I’ve seen, I really just appreciate every day that I can take, because you never know when it’s going to end,” Colaiacovo said Friday prior to the Sabres’ 4-1 win against the Carolina Hurricanes.

At 32, Colaiacovo, who usually has a smile etched on his face, is the Sabres’ third-oldest player behind Brian Gionta, 36, and David Legwand, 35.

Despite breaking into the league 13 years ago, Colaiacovo has played only 448 NHL games. Right now, he insists his body has “never felt better.”

“I’m at a point in my career where I’m getting older,” Colaiacovo said inside the First Niagara Center. “I don’t use that as an excuse. I definitely don’t feel the way people portray old people to feel or guys my age to feel, and I think that’s partly because I’m around such a young, vibrant group of guys.

“I’m a big believer in age is just a number and it’s all about how you feel. I feel really good right now. … When you surround yourself with a younger group of guys, you kind of find yourself to fit in that age group.”

Colaiacovo, the 17th overall pick by Toronto in 2001, has fit into the lineup the last five games and eight of the last nine contests. When the Sabres signed him to a one-year, $900,000 contract in July, it appeared he might rank anywhere from third to seventh on the depth chart.

“(Colaiacovo is) probably one of the better guys in our room in terms of their attitude and their preparation for the game,” Sabres coach Dan Bylsma said. “He does have a veteran presence to him about his preparation, even when he hasn’t been in the lineup it’s been good. We need more of that.”

Naturally, Colaiacovo, a healthy scratch as recently last week, wants to be “an everyday guy.”

“For me, (sitting has) been tough at times,” he said. “But I’ve stayed positive. I’ve worked real hard and I’ve kept myself ready. It’s a long season. Things change all the time during a long season. It’s a matter of me being patient and don’t look too far ahead of myself, don’t get comfortable. Just continue doing what I’m doing and making sure if there is a decision to be made, it’s not made on me.”

The last three seasons – a stretch in which he only played 64 games – helped Colaiacovo gain a stronger and narrower focus on the positives, he said.

“And over the years I’ve gained so much knowledge that in times like this you just learn to keep it simple, and then once you get into a rhythm you start doing a little more and a little more, and once you get in there and you feel more comfortable out there, everything just starts to come back naturally,” he said.

The Sabres made one lineup move up front, scratching Johan Larsson, who has zero goals and three points in 21 games this season. Tim Schaller moved in after sitting four straight games.

Bogosian and winger Evander Kane played after missing the morning skate. Kane has been wearing a walking boot.