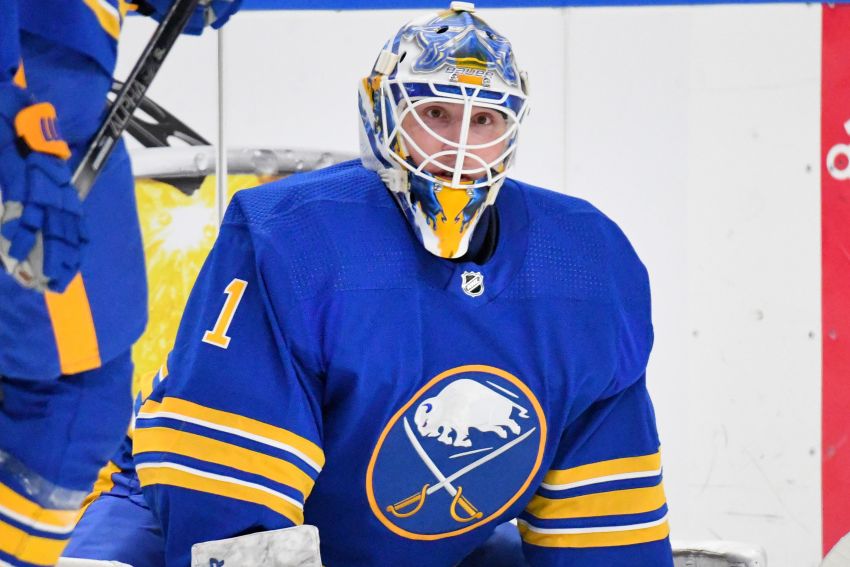 The Buffalo Sabres will be without goalies Ukko-Pekka Luukkonen, Dustin Tokarski and Carter Hutton for the final three games this season, interim coach Don Granato said.

Luukkonen, 22, left Saturday afternoon’s 6-2 loss to the Boston Bruins after getting his left skate caught on the goal post.

Granato did not have much information on the Finn, who was examined Monday.

“As far as the details of the report, I don’t have those,” Granato said on a Zoom call this morning. “I don’t want to go into those because I could get that wrong.”

Hutton, 35, has missed the last 23 games recovering from a lower-body injury and recently suffered a setback.

Sabres goalie Michael Houser, who made his NHL debut in Monday’s 4-2 win over the New York Islanders, will start his second straight game tonight at KeyBank Center, the home finale. Stefanos Lekkas, who signed a professional tryout Monday, will back up Houser.

Houser, 28, hadn’t played a game in nearly 14 months before Monday’s contest. Lekkas, 25, has played seven games for the Rochester Americans this season.

In other goalie news, Granato said Linus Ullmark skated this morning and “was improved again.”

Ullmark skated with his teammates Monday for the first time since suffering a lower-body injury April 13. The Swede has missed the last 11 games.

Granato said “it’s going to be really close” if Ullmark can return this season. The Sabres close the schedule with road games Thursday and Saturday against the Pittsburgh Penguins.

“That decision won’t be made until that game day,” Granato said.

In other news, Granato said the Sabres will make one lineup change tonight, inserting defenseman Colin Miller for Will Borgen, who will rest for maintenance.